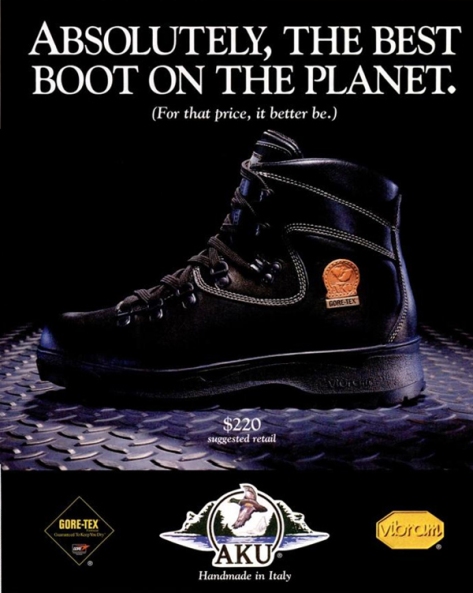 The amount of boot talk on here is pretty monotonous, to the point where I considered creating a spinoff site called Shitkickers, that was solely dedicated to them. But I never got round to it. The reason for their ubiquity here as a topic is that there’s too many great brands out there with amazing ads to ignore when we’re talking about matters of design and construction. My respect for the Italian boot industry is substantial (as the preoccupation with La Sportiva and Vasque demonstrates) and Montebelluna is the town that matters when it comes to that artform (it’s also where Nike gets certain football boots made too) to the point where it houses the Museo dello Scarpone aka. the Museum of the Boot which looks very interesting indeed. Aku is one of those brands with plenty of performance cred up to the present day, but one that actively sought an urban consumer when it launched Stateside circa 1997. It’s an interesting case study in delivering two very different messages for their Timberland-clad trend consumer and the climbing and hiking communities — presumably via a U.S. licence holder.

The blacked out ads in urban outlets like ‘Vibe’ and ‘The Source’ highlighted cost and style, while brushing on the performance side and mentioning the all-important GORE-TEX while the ads for hiking press are dense with facts and figures. Launched around 1990 by boot boffin with innovative inclinations Galliano Bordin as the successor to his workshop’s Dinsport trekking and ski boot brand that ran from the late 1970s to the mid 1980s, Aku is a classic Montebelluna brand. I never saw much more advertising this extensive after these March 1997 campaigns (maybe I wasn’t looking hard enough), but while it’s not the stuff of rap lyric references, I know a few New Yorkers who still get misty-eyed for the $220+ priced pieces of the line from 15 years ago that date back to a time when they were losing it over Italian off-roaders.

Related to the above through its nationality, the appearance on the Rizzoli site of the ‘Thirty Years of Research in Style: WP Lavori in Corso’ book, with a publication date of April 16th is a reason to be happy this year. If the Massimo Osti and Stone Island tomes didn’t deliver enough documentation of Italian impact on the way we dress, here’s some more for you. As you can see above, I can look at old ads old day, and from the preview on the WP Lavori site, it looks pretty heavy on the ad archive front. With WP Lavori and its creative director Andrea Canè being a cover star on ‘Inventory’s sixth issue, that relationship seems to have expanded, meaning the book is an ‘Inventory’ co-production. I like Philip Watts and Leanne Cloudsdale’s writing, and the ‘Inventory’ aesthetic means a certain clarity and quality control that I respect. WP Lavori have been putting it down for a shedloads of classic brands since 1982, acquiring, licensing and crucially, treating the companies in question with a certain respect that guarantees longevity, long before there were blogs or carefully rehearsed artful layering for Pitti Uomo tradeshow camera coverage on said blogs. This book is likely to be good. 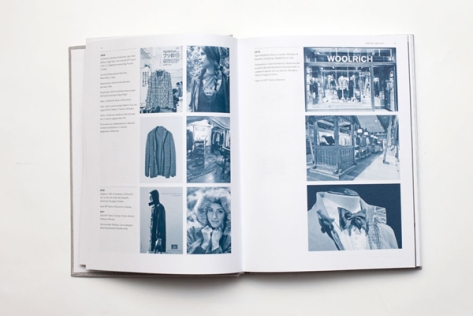 Can we tenuously link this to the above via Tom Penny’s Columbia boots? No? Okay then. Ged Wells’ Insane brand has been mentioned here before but the history page on the relaunched brand’s website is worth reading to learn how the brand grew, from Andy Holmes giving Wells’ work a name, Hiroshi Fujiwara introducing it to Japan, Jesus Jones’ role in boosting the brand’s popularity, Sophia Prantera’s work that evolved it significantly and ’30 Days of Night’, ‘The Twilight Saga: Eclipse’ and ‘Breaking Bad’ director David Slade being the director of the Insane skate video back in the day. Basically, it’s all the stuff I managed to not mention when I blogged about Insane a few years back, but it reinforces the significance of Ged’s creations and reminds me of the days when Curtis McCann was that dude.