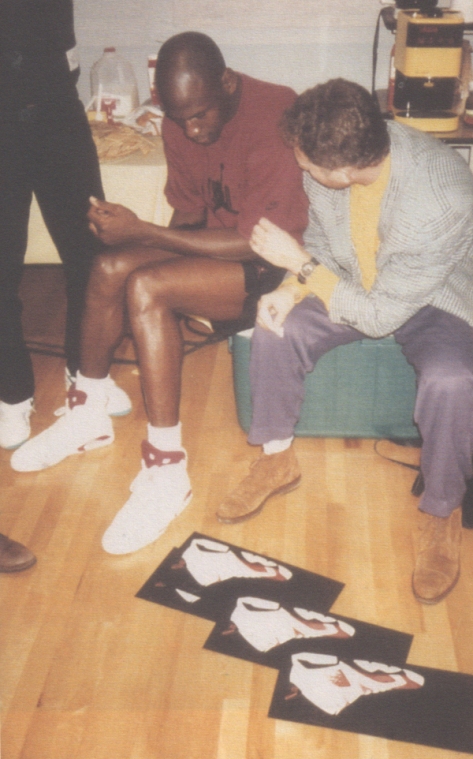 Rushing blogging today for a number of reasons. But that doesn’t mean I can’t assail you with a bricolage of barely related bollocks. No sir. It just means it’s even less connected culturally than ever before. For some reason, putting some pictures from the bin bags of brand-related ephemera (which I believe are out there on the internet somewhere already) of Tinker Hatfield and Michael Jordan in deep conversation on the subject of Jordan V and VI caused some commotion, so here’s the images again (the AJV one is actually from ‘Sneakerheads’ and has been posted before, but sometimes you need to repeat yourself to get noticed). Garments, hair, variations on popular colourways and sensible shoes. It’s all here. There’s more somewhere in the papery stacks, but drop-feeding rather than turning this into some Jordan fansite is probably the best route. For the time being, until I start hunting that SEO scrilla by reposting Modern Notoriety’s images with some hyperbolic copy. One day I might start doing that here. 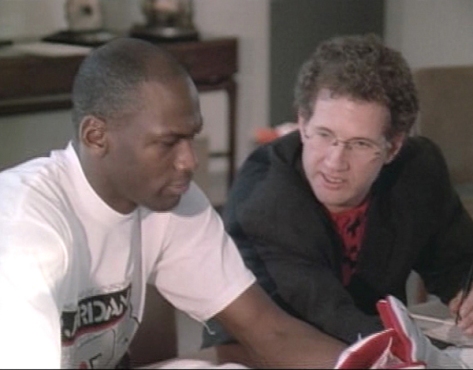 How the fuck did I miss out Carhartt and Chysler’s small collection of ‘Imported From Detroit’ jackets, tees and trousers? While the union of motor vehicle and apparel isn’t necessarily destined for greatness, these pieces are the best car-related clothing since Alan Partridge’s Castrol GTX jacket. In fact, unlike some more high-profile (and more expensive) Carhartt projects, they’re made in the USA as part of a new drive (pun unintended) to promote the brand’s homegrown manufacture, as detailed by A Continuous Lean last October. The blacked out ‘Made in the USA’ patches limited runs (each individually numbered) and Detroit map on the custom quilted lining are all nice touches. In fact, from a high-end partner and launched at one of any number of Euro fashion trade shows right now, the iPhone blog paps would be descending on these pieces. But they’re not letting them into their urban ninja or street goth world right now. Not yet, anyway. These are more legit because the motor trade is one that actually necessitates workwear, whereas looking serious by a wall for a lookbook doesn’t. Admittedly, while you’ll pay extra for APC and Adam Kimmel’s vision, and they probably won’t be made in the USA, and while I love the IFD Active Jacket, it’s quite clear from the imagery that it fits mad boxy, unlike the slimmer fit of the higher-end and Euro-centric pieces. 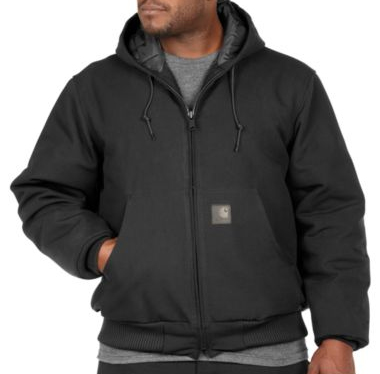 It’s good to read informed opinions that hint at some substantial levels of research too, and I’ve been preoccupied with The Weejun all over again lately. The musings of a Brit who has been infatuated with Ivy since 1979 (a little while before either ‘Take Ivy’ reprint, anyway) is a masterful blog and his Brooks Brothers circa 1980 piece reminded me of a conversation with a friend about rich guy trousers, wherein we defined wealth by the mindset that innately associates lurid corduroy with casual, rather than a beat up pair of jeans. Brooks Brothers mastered the rich guy trouser and The Weejun talks about the pair that caught my eye when those old catalogue PDFs popped up a few years back on the Ask Andy Trad forum via Yamauchi Yuki (who I believe is a Japanese Aloha guitarist), with a wealth of wild trousers in the mix. The Christmas “fun” cords are basically half of a click suit for the very wealthy. Anybody who can pull them off is an original don dada of the college town scene — I’ve seen similar attempts at lurid mismatches from Polo, but Brooks Brothers’ are significantly wilder.

Bookending this entry with shoe-centric talk, given the boom in all things Nike Free, here’s a shot from a Nike promo booklet on innovation of the original Tinker Hatfield shoe prototype he called the Nike Free back in 1994 — a decade before his brother Tobie Hatfield helped bring us a very different Nike Free in 2004. As the company copy points out, this was actually destined to get a Rift-style split-toe (this was just before the Rift too). I see a little bit of HTM2 Run Boot in here, plus some traditional weave in there that may or may not have informed later developments too. That’s a lot of influence in one unreleased space age sandal and pure urban ninja fodder. 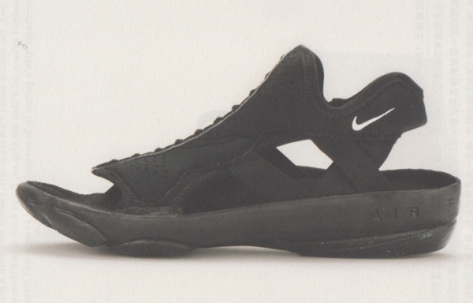