Hip-hop style has evolved a lot, but in a world where you only have to make something basic in leather to be crowned king of the high-end crossover, it’s way dumber than the late 1990s Tunnel-era take on fashion was. Bright red leathers in XXL Tim Westwood sizes and canary yellow technical wear, with a Hype Williams fish eye effect and the Casio demo keys stays winning. Back when ‘Clef was pulling his weapon out on an editor rather than posing on a bike in his pants, people weren’t even looking for any pseudo-intellect in rap or hunting for messages in every line. I like where things are in 2013 (salutes to this guy for getting all crushed out heavenly, always entertaining me with his outlandish garms, infuriating people and giving his brand the name Luxury Excellence), but after that unofficial 1995 cutoff for purist-friendly major label work, rappers really got wild with the garms to create a goldrush of hip-hop clothing labels. Can I still buy a Mecca U.S.A. suit? Probably. Germany still fucks with some Johnny Blaze gear and I wouldn’t be surprised if there was a 4-floor Sir Benni Miles store owned under license out there. This seemed to be a starting point for rappers to make an effort again after years of brown hoods, boots and army surplus. On the hip-hop wear subject, with their impending Rain Heat & Snow clothing line, is the U.S. Postal Service going to retro Danny Boy’s cap from 1992? It’s cold right now and I’m thinking about rap-wear, so that seems like a sign to post a classic magazine fashion shoot. In late 1995, Vibe magazine gathered an eclectic group of rappers for their Cold Chillin’ fashion piece where Junior M.A.F.I.A. Das EFX, Q-Tip and bizarrely, Kool Keith, all modeled the latest cold weather creations. The photographer, Daniel Hastings, shot pretty much every key hip-hop album/single cover shot between 1994 and 1996 and that summer, his work was present on the cover of Only Built For Cuban Linx. 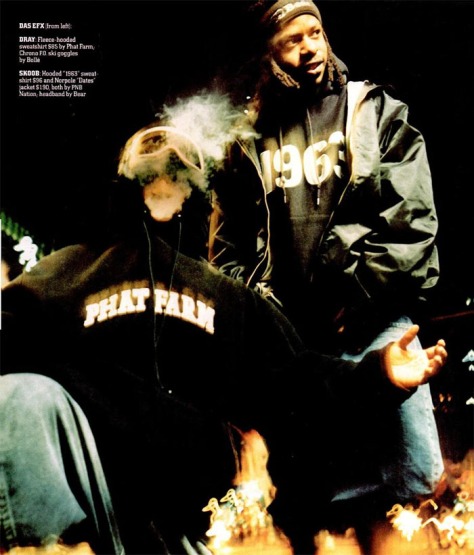 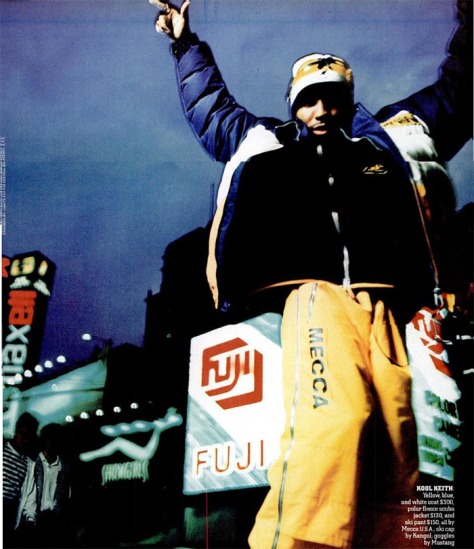 As a bonus (I should really have chucked all this up on Tumblr rather than on here), nothing screams 1995-1998 quite like the Nike Air Max 95. Ghostface (Killer rather than Killah here) basically dressed like people do now 18 years ago in The Source and three years later Big Pun rocked that shoe and coordinated some food packaging with it rather than his actual outfit. Lil’ Kim wore it for press shots for Conspiracy too. Flamboyant but still a defiantly street shoe, it crops up time and time and again during the era described above.

In the midst of this late 1990s nostalgia, Cieron of ISYS has put together his own little video ode to a time dominated by Puffy and StarTAC phones for the launch of the third issue of LAW next month. It’s a good match. ISYS is keen on celebrating the unsung style that surrounds us, while LAW has a similar agenda in archiving something similar and capturing the kind of thing that’s near-impossible to explain to your American friends. yet so close to home that we barely document it.

One thought on “IT’S A COLD WORLD”