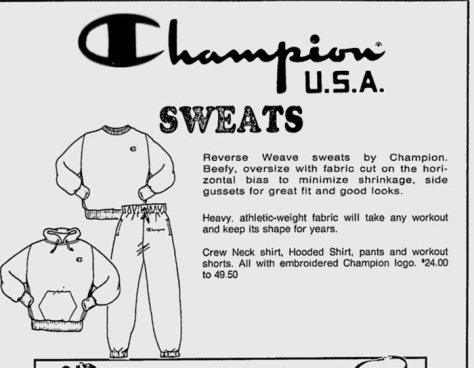 There’s a piece on Champion sportswear on the size? blog because I was asked nicely and if you’ve read this blog more than three times, you’ve probably realised that it’s little more than a Champion fan site, so why not whore myself on the subject completely? It’s plenty of facts and guesswork that has already been on here, so you’ll have seen it before (I’ve officially run out of words to write about Champion or Timberland as of today). It was interesting seeing comments on Instagram regarding the UK relaunch of Reverse Weave too — a whole generation seems to have written it off as budget clothing in the Lee Cooper vein and I can’t blame them, because those licensing deals in the UK hardly made it seem like a premium brand during the last decade. Between Champion and Fila, I wonder whether those dirt-cheap dadwear connotations can ever be reversed. This was an attempt to reinforce that Champion isn’t Lonsdale and you can read it right here.

The good people of Proper put me onto this short Oi Polloi (another Champion stockist) documentary. Steve and Nigel make some good points here — the evolution of terrace style is present in what they’ve built (with plenty of nods to the past, like the deerstalker and Henri Lloyd gear) and not the world of reissued tracksuits and gear that specifically tries to target that audience. I still don’t understand the appeal of wanting to dress up like it’s a 1980s hooligan themed fancy dress party but each to their own. Some want to dress like Jack in Five Easy Pieces and others want to dress like an extra from Green Street. Such is life.