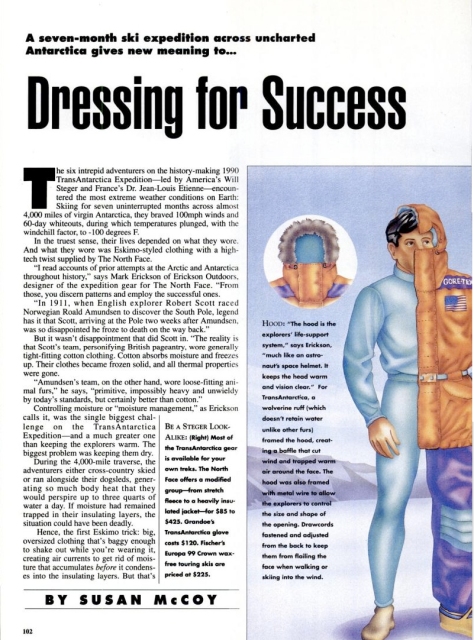 On the North Face front, the Scott Schmidt Steep Tech line seems to get plenty of attention, but the original money was with the earlier, ultra sophisticated TransAntarctica collection, created for the 1989-1990 foot, ski and sledge expedition, where a global crew of six men from six nations that included Will Steger and a pack of huskies would travel 4,000 miles across the Antarctica over 220 days — the first ever crossing without any motorised assistance. With their heavy fabrics, doomed explorers like Captain Scott and his party would find out that apparel mattered earlier that decade, but this twelve-piece collection, custom created by Erickson Outdoors for The North Face, GORE-TEX and DuPont and made in the USA, was integral to the crew’s success. It even included shoes for the dogs to protect their paws.

It’s interesting that, for functional reasons, the shells were linerless, exposing the GORE-TEX membrane and the system’s colourway of three colours were specially chosen to be visible in a low visibility situation as well as visible for the extensive TV coverage of the journey — orange is considered more visible than red, turquoise, according to the 1990 Ski magazine feature above and below is “…psychologically soothing” and purple is apparently amplified when it’s contrasted against snow. Erickson managed to twin technology with Eskimo traditions that had been common sense for centuries. You can see the gear being worn for its purpose here and in this 20th anniversary video.

The North Face would put out a TransAntarctica collection at retail in 1990, with the vast GORE-TEX stitching on the shells and the six-flag logo, representing America, Britain, France, Japan, Russia and China (not a combination often seen in this kind of unity), plus some rugged stretch fleece designs, plus 3M detailing — all inspired and modified from the expedition spec rather than being 1:1 copies. Those expedition pieces are definitely world’s best jacket contenders and — with all the crazy patches — they’d probably be Homer Simpson approved. 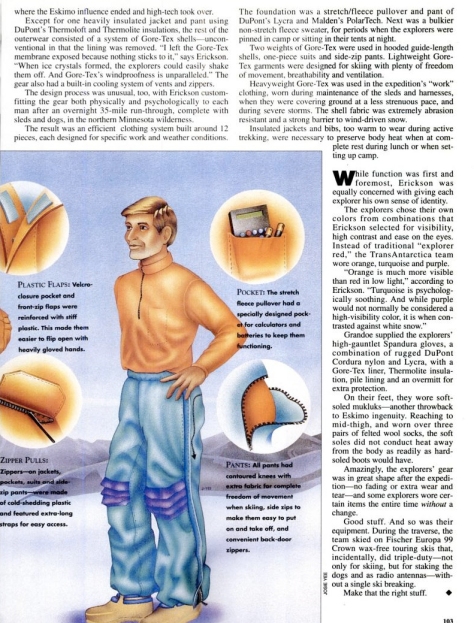