I’m such a company man. Actually, I’ve got love for Mo’Wax, Matt Sleep and Jack Purcells, plus I wrote the press release for this project. So the anti copy-paste law is OVERRULED. I got a good Q&A out of this too, which may or may not end up on this blog. I’ve been after those stingray mids since I saw a pair on Acyde’s Instagram. As friend and family projects go, the detail on this one is crazy.

“From its debut in 1992, the London-based Mo’Wax organisation was the pioneering meeting point for an array of subcultures to merge organically – multiple musical styles met art, with painstaking attention-to-detail when it came to design. Founder James Lavelle brought his obsessions behind the sonic side to the forefront with photography, sleeve art, toys, books, exhibitions, sought-after streetwear and a connection to the collectible all celebrating the hunt for the next thing.

Coinciding with this summer’s London-based Urban Archaeology exhibition and tie-in book, Lavelle and Converse created these appropriately limited edition sneakers based on the notion of taking a collage of influences and re-appropriating them like music samples. The Jack Purcell made sense as the base model, because it’s Lavelle’s personal choice, “The sneakers that I wear the most are Jack Purcells. So I was keen to be able to work with Converse in a contemporary way, representing me as a person right now.”

“The detail was really, really important. Just new ways and new technologies and things that hadn’t necessarily been done before – the idea was to create something that had the Mo’Wax feel. I really wanted to create a sneaker that would stand out in its own right but wasn’t gimmicky, or over the top and garish. It would fit in with where I am now and not necessarily where I was 15 years ago.”

The Converse Jack Purcell Mo’Wax Ox has a unique white debossed leather upper, while the mid-top version is embellished with premium stingray effect leather. Both re-workings of this staple masterpiece bring an appropriately obsessive level of detail to this silhouette, despite its apparent simplicity. Custom “Build & Destroy” logos on the familiar moulded rubber toecaps and classic Ben Drury/James Lavelle Mo’Wax camo screen-print graphics on a cotton base, with metallic gold logos, are used for the sockliners and heel stay.

For Lavelle, the end goal was subtlety, “How can we get the Mo’Wax design aesthetic into something really subtle? It was about keeping certain themes going, like having Mo’Wax on the sole of the feet or on the tips of the laces or on the insole or on the little heel strip on the back — there’s this sort of Mo’Wax touch. But the stingray was just to try and apply something that would hopefully look pretty cool.”

A semi-transparent, ice blue version of the familiar smile and heel license plate, a semi-transparent ice blue outsole with the Mo’Wax logo cut between the left and right foot, and branding that even extends to the ice blue lace aglets all capture the spirit of the label. Naturally, packaging is paramount and the box design also channels that emphasis.

That boundary-blurring vision that brought skateboarding, artists, DJs, fashion and filmmakers into the same space is echoed in the Converse Jack Purcell’s ability to resonate with any style. Strictly for a chosen handful of Mo’Wax affiliates, this commemorative project adds to the mythology of the company that help define the way culture is curated and presented.”

(Speaking to James, I got to clear up the mystery of the Mo’Wax x Nike CD — with music by Richard File — from early 1997 too: given the nature of that project, no samples were allowed, which made it difficult — he conceded that it was a strange project and explained that it was one facilitated via an external agency). 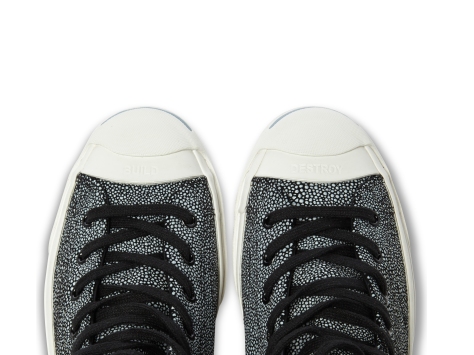 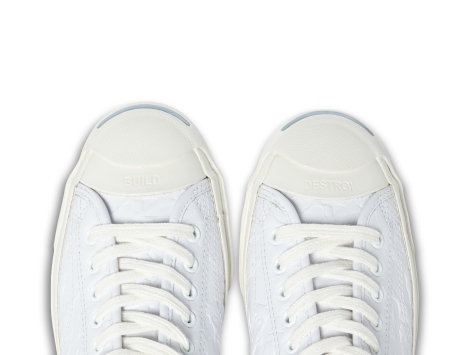 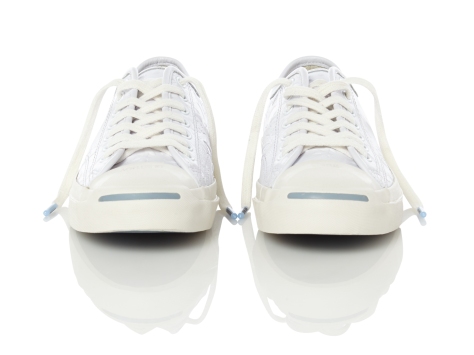 One thought on “MO’WAX FOOTWEAR”