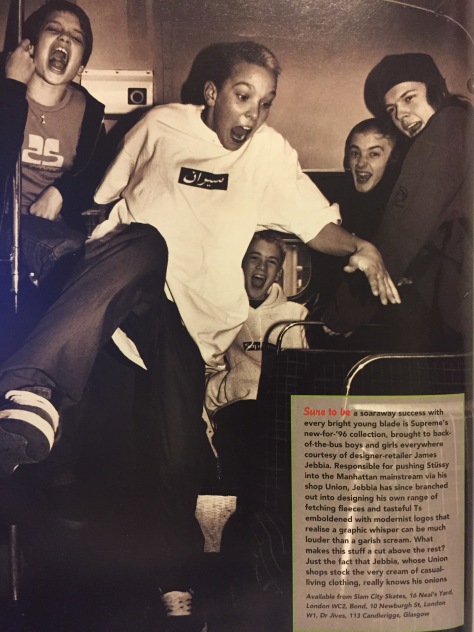 What’s all the fussing and feuding for these days? I’ll never understand the people pretending that they emerged from the womb fully clued up, nodding sagely. Life is about discovery and evolving tastes. Got into something a year ago? Feel free to comment, regardless of what some old misanthrope who hopped on it five years prior tells you. Those who were really there at the start of anything, don’t sit and waste their time typing, blogging and dissecting them, unless they made a bad business decision and ended up on the outside. If something makes a few thousand kids YouTube Ninjaman or New Order, even if it’s just to get bragging rights over their online peers, then it can only be a good thing. then A brand like Supreme might not have been as widely discussed 20 years ago, but it was still fêted enough by the style press to warrant a page in The Face around Christmas 1995 — a magazine that was on the shelf of my local newsagent, with a then-circulation of around 113,000, back when mentioning anything in relation to Stüssy had us interested. Supreme was even on the shelf relatively locally at Dogfish in Cambridge for a bit earlier that year. It wasn’t necessarily a secret society then either — just a good brand, carefully distributed.