New Balance’s ‘N’ application might be one of my favourite pieces of branding. I know a few folks who don’t bother with the brand on the basis that the ‘N’ looks ugly to them, but that’s because they’re idiots. Introduced circa 1976 (I’ve seen 320s with the uglier logo-free look as well as the ‘N’) when the brand recruited branding guru Terry Heckler (his Heckler Associates company defined the Starbucks brand too) who argued against protestations that it looked too Nike with, “That’s good, they’re making more money than us. We’ll sell twice as much.” Fair point.

Execs at a newly-christened Nike were concerned that their swoosh would fail because despite the sense of motion it conveyed, it had no performance benefits — adidas’s 3-Stripes, PUMA’s Formstripe and Onitsuka’s Tiger Stripes were all reputed to add extra support to the upper as well as make their mark. I know that’s not actually true for Onitsuka, and I doubt it is for the other two either, but it’s a nice story. The ‘N’ is a recognizable stamp, plain and simple (I actually had a go at cutting one out in the factory earlier in the year and managed to embed the cutter two inches into the cutting board), but when it’s made of Scotchlite, it’s arguably one of the truly functional sneaker logos. I can’t get enough of the reaction when light hits them.

Alongside the phenomenal pricetags ($130 for a 1300 in 1985, $160 for a 1500 in 1988), the ‘N’ is what piqued my interest in New Balance. Saucony, Mizuno and Brooks never quite had the killer application to sway me from the big two, but Heckler’s work paid dividends. I recently dug out the ‘Enduring Performance: The New Balance Story’ book from 2006 and realised that I shouldn’t have written it off at the time for lacking an exhaustive model list, because there’s some great material in there. I’m liking the new UK A/W 2011 catalogue too, with a Flimby-made soft leather cover, complete with an ‘N’ attached. The content’s decent too. 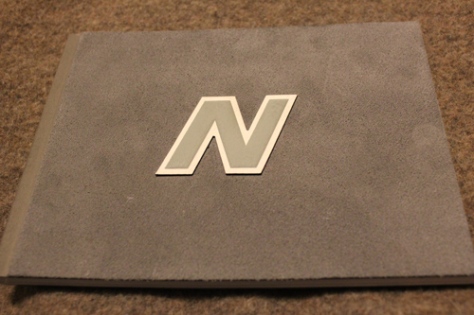 On a deeply unrelated note, thoroughly enjoyed Jerzy Skolimowski’s ‘Essential Killing.’ I was concerned that the symbolism and allegorical nature of it might make it as intolerable as Nicholas Winding Refn’s ‘Valhalla Rising’, but at fear of trivializing the topic at hand, it played out like a Guardian reader rendition of ‘First Blood.’ I’ve only dipped into some of Jerzy’s earlier work, but I wasn’t aware that he was the man behind the amazing 1977 Brit-horror oddity, ‘The Shout’ with Alan Bates up to no good using his Aboriginal shouting powers.

Of course, the posters promoting ‘Essential Killing’ as some sort of proper action film means it’s guaranteed to spit out screwfaced punters who went it expecting some heroic bloodshed. I was raised on ‘Pathfinder’ and ‘Quest for Fire’ and I expected more survivalist fun along the same lines. It wasn’t much like that either. I distinctly recall Ken Loach’s ‘My Name is Joe’ being promoted as a pulse-pounding thriller too. It wasn’t, but I respect arthouse cinema getting all misleading and grindhouse on us every once in a while.

Where the film truly excels is in its appearance — it looks like the best video lookbook ever made. Prince Vince legging it around the woods with a beard? The lack of smiles? The bloodstains on a while military snow suit? The flash of Guantanamo orange beneath the black overalls at the start of the Gallo’s escape and initial attempt at disguise? I hope it sets trends. At the very least, the barefoot in snow style would cull a few mindless followers via pneumonia and frostbite amputation.