It’s nearly Christmas and — if you recall this blog’s content from Christmases past, you might recall the hate filled lists I used to drop here. I thought about doing one again, but the blog world is already full of folks getting all cynical despite being as obsessed with emperor’s new clothes as much as the next person, so it doesn’t need me doing it too. I think much of what I wrote in previous entries stands anyway — the world is at least 15% more corny and easily impressed than it seemed to be in late 2011. But why piss on people’s picnics? Plus, much of the work i contribute to every day is hardly firing on all cylinders, so I’m not in the position to take potshots right now. It’s still fun to fire off a few though, even if they backfire.

Just because you’re a pro skater and you’re meant to be all artistic and expressive automatically means that you get to contribute to art shows with some lo-fi photography or a nosebleed on a canvas. It also means you get to start a brand as a passion project, which may or may not be utterly unremarkable. If you’re Geoff Rowley, that brand will be awesome and you’ll spend more time punching people in the face for talking shit, making your own jerky and shooting guns in a canyon. CivilWare, launched in the summer, didn’t catch my attention the first time around, because it just seemed to be another simple tee line. The current store inventory includes coffee beans, an axe made with Base Camp X, paper shooting targets and a custom-made knife with Anza Knives. Because it’s Rowley-affiliated, you know that he puts this kind of thing to use, rather than this being some self-aware attempt to reassert masculinity in the era of organic produce and hurt feelings on social media. I’m looking forward to seeing what CivilWare does next.

Here’s a brief Shawn Stüssy interview from 1992 that calls him the “Urban Armani” and includes him shouting out Brand Nubian and discussing the brand’s expansion plans. it’s no the most in-depth discussion, but it belongs here for completist’s sake. 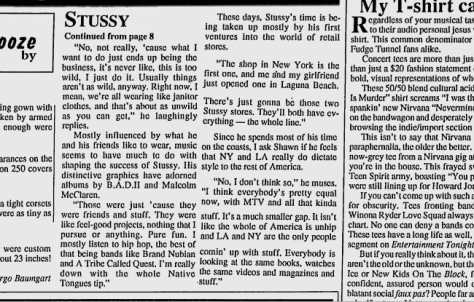 Shouts to Joerg at 032c for letting me write some end of year shoe-related stuff for their site. Getting to big up Olympus Has Fallen onsuch a prestigious platform was quite a privilege.

Whoever decided to switch up “dog” for “gun” in this Timberland newspaper ad from the 1980s makes this promotion more memorable. Timbs beat guns — anyone who ever had that outsole imprinted on their face or chest and lived to tell the tale can concede that it probably beats a bullet in the assault stakes.

While we’re talking axes and weaponry, just like Bad Santa, Home Alone, Gremlins, Father Ted, Scrooged and A Charlie Brown Christmas, the Tales From the Crypt episode And All Through the House is a Christmas necessity — you can see the original EC comic story here (don’t read it if you haven’t watched it yet) and the shorter British adaptation starring Joan Collins from the 1972 film Tales From the Crypt is here. Larry Drake is terrifying in the 1989 version and Fred Dekker and Robert Zemeckis do great things with the source material. I hope Santa brings all of you what you want and doesn’t arrive in the shape of an escaped psychopath…