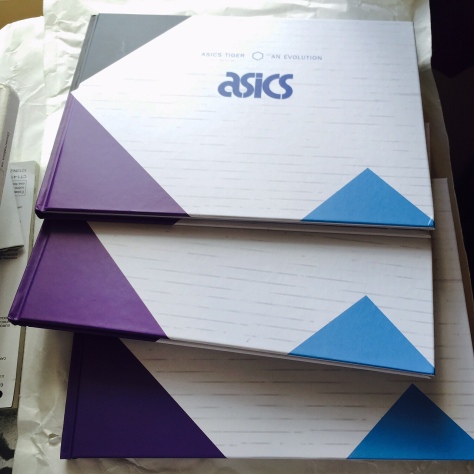 I recently worked on a short book about the evolution of some flagship Gel designs with ASICS. While I get bamboozled by the sheer array of conceptual collaborations these days, I have a great deal of respect for this Japanese brand’s performance design language throughout the years. There’s actually more information on the earliest days of the Onitsuka line in this book’s typo-heavy predecessor, whereas this one focuses on the 1986-1994 era a lot harder. It would have been nice to see Sneakerlife.de get a credit for the borrowing of a few of his photos, but it was good fun to talk about some of the lesser-discussed models in the vault (as well as chatting with the designers themselves) and not focus on the pretty colours and materials for once. I swear that the hype has clouded the brilliance behind most of the silhouettes, so this was an attempt to celebrate them for their true purpose. Even if it’s a promo piece for the lifestyle-orientated ASICS Tiger EVO line. ASICS Tiger: An Evolution was created for promo purposes only, so it was strictly giveaway status. If you’re interested, chat with your local stockist and see if they ever got any. 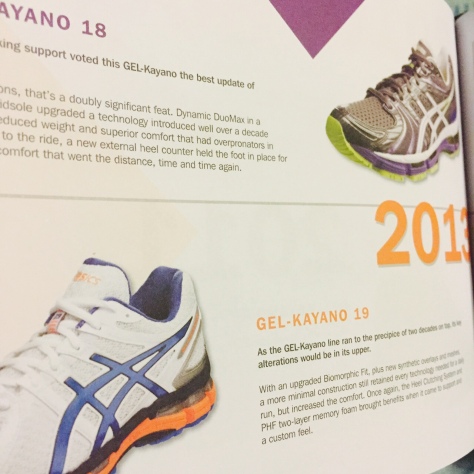 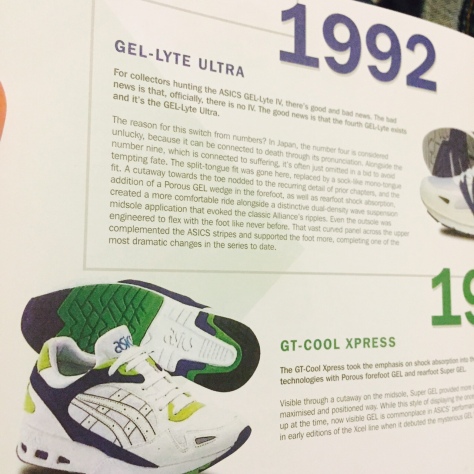 I’ve got some other things ready to go up here, but there was a slight delay in obtaining the relevant imagery. So in the meantime, I’ll plug some other things — a couple of months ago I put together a rough ASICS history for size? (hopefully I’ll get the opportunity to refine and expand it a little soon) that you can see here, here and here. While I’m bored as hell with the slew of occasionally unremarkable collaborations dropping every hour, I’m obsessed with that brand’s 1985-1995 archive (some of the best pure sports performance design I’ve ever seen), I got the opportunity to visit their headquarters in Kobe last year and a quick spot of research revealed some superior apparel creations and logo design from the late 1980s. Currently, there’s a lot of interest in the brand’s early 1990s output and an emphasis on the same couple of silhouettes, but there’s a lot more to talk about. Last week I got the second opportunity to talk to Shigeyuki Mitsui, designer of the ASICS Gel-Lyte III (and co-designer on the Gel-Lyte and Gel-Lyte II). You can read the brief interview here on Complex UK (can you see that if you’re in the USA? I’m not sure). Apologies for the basic nature of the questions — Mitsui-san speaks perfectly proficient English, but a background of obvious hip-hop records booming meant that discussing anything that didn’t involved loud, short queries and pointing would be impossible to transcribe. The man’s skills and humility deserve respect.

I thought Patta’s London store launch was tonight, got back late and this Duran/Sugar Ray No Mas ESPN documentary has completely distracted me from updating this blog with anything substantial. But I’ll point you in the direction of a blog more interesting than mine — way before I was obsessing over old ads and things that nobody seemed to acknowledge the existence of, DeFY. New York was on the case. One of the truest shoe dudes on the internet, his knowledge of shoes is Jedi level and you can get lost in the sheer volume of imagery he’s amassed and uploaded. We chuck the term influencer around a lot, but he’s a huge, huge influence on what I do here. So go visit www.defynewyork.com and look at some stuff. Completely eclipsing my YouTube spotting in this entry, DeFY got hold of some tapes, including a ton of 1987 Foot Locker commercials that, with their Eddie and Rick soundtracked openings, are superb, talking about some classics on their introduction, with a wide-eyed, scripted, infomercial-esque excitement. Here’s a couple of the rare gems this prolific knowledge-sharer has upped on his YouTube channel and they’re a glorious antidote to the current knowing, tech savvy, SEO enabled, social media shared modes of footwear promotion. The Air Max is a big shoe, but those rarely spotted Snake Cortez are next level. Go get educated.

I’m on holiday right now, so consider this my GONE FISHING sign. Normal service (well, longer rants) should resume at the end of next week, but I can’t stay away entirely. Catching up with Mr. Ronnie Fieg — a man who loves shoes as much as I do — we discussed whether kids who couldn’t give a shit about the things I throw up here still feel the innate credibility of a brand that had power back in the day as opposed to an old brand that sucked then and sucked now. ASICS is a good example: the Gel designs were worn by those looking for a break from the staggeringly obvious and their individual, Japanese approach to design has paid off at heritage level. Not enough people seem to recognise the Gel Lyte III’s groundbreaking approach to midsole densities and heel support beyond the strange Videodrome-esque tongue slit. Ronnie’s Dolphins colourway versions are powerful, taking me back to the days when I would have sold a lung for the Miami makeup of Pony Linebackers. Reading Pump Me Up, I got to look at a classic Glen E. Friedman portrait of D.C.’s D.I.Y. Def Jam legends, the Junk Yard Band and noticed that they’re repping the ASICS hard back in ’86. 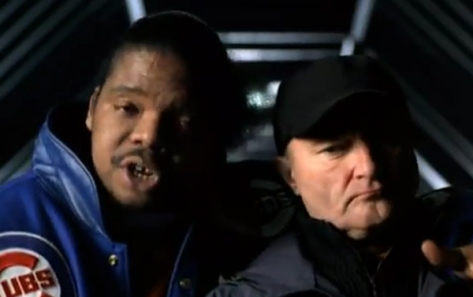 There’s a special place in hell reserved for people wandering around saying “Trill” and “We out here”. Especially hipst… actually, let’s be more direct — whiteys. Unless you’re Haystak or Lil Wyte or something. Self hating hipsterdom of the Homer Simpson “It’s funny ‘cos it’s true! We’re so lame!” kind is equally jarring, but honestly, the only rap nostalgia I’m interested in is a restoration of the days when melanin-deficient rap nerds got a “What do you know about hip-hop?” reaction to any attempts to spark a chat about Rap-A-Lot. I used to enjoy the vicarious thrill of listening to X-Clan, King Sun, Ice Cube, Public Enemy, Geto Boys and Brand Nubian just because they didn’t seem to want me listening to them. They weren’t retweeting my endorsement — rappers were taking my international money order for fan club membership or merchandise and sending me nothing because I was a white rap fan and I didn’t deserve it.

It was a poorly kept secret that we were the ones funding the industry by making up a lion’s share of music purchases, but nobody seemed to cut us any slack — we were honkys, crackers, goofy dudes or cops with amplified caucasian dweebiness on album interludes. We kind of knew our place. Even MC Serch sometimes sounded so disappointed at being white that he’d berate white devils too. Somewhere down the line, the pet white characters like that white dwarf in Too Much Trouble, Miilkbone and Knucklehedz gave way to a post-Eminem world where wild liberties are taken, kids that aren’t Paul Wall have fronts, people actually debate whether it’s cool for white people to say “nigga” (some people even think it’s cool if Gwyneth Paltrow does), hug rap replaced thug rap and even the gooniest goons seem to want to interact on social media, not helped by a climate of dickriding where rappers and hip-hop personality on Twitter “reacting” to stuff is a big deal and everything has to be “addressed”.

As is the case with high-end brands and formerly snooty stores wanting to be buddies all of a sudden, I’m not sure I’m comfortable with rap’s acceptance of me. I’m assuming that the NPR intern kid is white (posisbly even fictional) and there he is dismissing Public Enemy — that would have been a beatdown in 1988 (not that I’m advocating one and it’s kind of quaint that kids still want to be music journalists). Now it’s just a low-level viral ticking off. And how did you just get on the Trill talk when UGK said it 24 years ago (20 if we’re talking Jive records)? “We out here” is strictly for white teed characters in the background of WSHH videos. Revoke those passes people — hip-hop needs to start getting intimidating again. The music’s still on point but some folks need to be kept in check.

Anyway, everyone knows the only white dude hip-hop allows is Phil Collins.

If you spotted the mysterious artwork for Pasolini’s ‘Trilogy of Life Criterion Blu-ray set doing the rounds this week, which may or may not be a fake, because its origins are mysterious, you’ll have spotted the homage to Basquiat in there. Whatever the origins, it’s a lot cooler than Swizz Beatz shouting about “That Basquiat Life!!!!!” on Twitter. Is a disfranchised, heroin addled existence something to add multiple exclamation marks to? How about, “That Mark Rothko Life!!!!!” 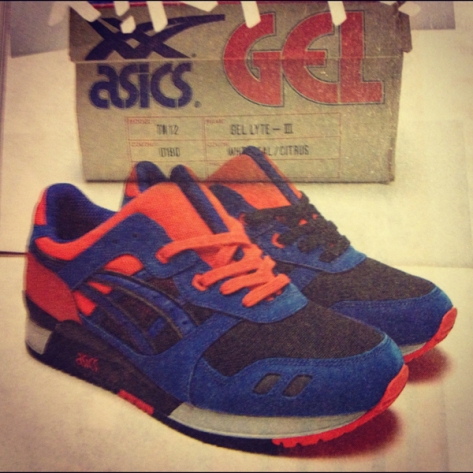 I maintain that Long Beach’s Proper don’t get their due for breaking from the collaborative norm just before a hype communication infrastructure was in place. Their ASICS GT II used speckles when they were still cool and applied military grade ripstop long before everyone else did. In a ‘Sneaker Freaker’ interview in 2005, they talked about a Gel Lyte III they were working on (seemingly coinciding with the model’s reintroduction). And then, nothing. This Knicks-colour version of the shoe is one of the great lost collaborations and it even has a phantom-like quality, thanks to some wonky Photoshopping. If this shoe had come out, I would have lost my mind and I still think it holds up, despite the slew of makeups that have dropped since.