I’m out of town for a while, so this is a weak blog update. I only just realised that the Passengers segment on Biggie Smalls from 1995 has been uploaded on YouTube, despite it being there since August. For years this was inexplicably absent from the internet and just as The Word‘s Onyx Throw Ya Gunz made an appearance fairly recently after being little more than a gradually eroding memory for 19 years, it’s back. Not only was the UK the place where Biggie got his first magazine cover, the following year, Channel 4 transmitted nearly fifteen minutes of his daily operations on a Friday night as part of Passengers, the patchy but entertaining yoof magazine show that also included pieces like James Lebon profiling Shyhiem during his Rugged Child days. You get Chris Wallace’s mum talking about his Polo pieces as a kid, some studio static with some concealed firearms, great footage of Faith smoking lots of weed, some live footage and a young Lil Kim (credited as Little Kim). Classic material. Naturally, like most long-unseen things of this ilk, this was elevated to a D.A. Pennebaker level of insight in my mind during its absence, but significantly less in-depth now I’ve finally watched it again. Shouts to jimbeanthelegend1982 for that upload.

I’m back in the UK and it doesn’t look like I missed much during my absence (I’m basing that assumption on the contents of my email inbox). New York was excellent and while there were several highlights, the carrot cake at Carbone and visiting Quad Recording Studios (and yes, references were made to testicular bullet holes in the lobby) with Mr. Nick Schonberger to see Large Professor playing Stalley some new beats from an iPod were two of the best moments. Many of the producers I’ve obsessed over in my lifetime have hit a decade-long dull streak but Extra P is still a beast. To be in the presence of genius or a really big fucking slice of dessert is always a privilege. Nothing makes me amplify my awkward Brit steez more than meeting my rap heroes as a fumbled iPod cable passover testified.

One of the few other rap dudes who would have me carrying on like that is Kool G Rap, with whom the Professor worked on classics like Streets of New York — looking at old issues of The Source, I find myself mourning the decline of the record label art department who put the incredible teasers that were scattered throughout that magazine. The release of Kool G’s 4,5,6 in 1995 was preceded by Epic paying for small ads with co-signs from Method Man, LL Cool J and — best of all — this quote from Biggie that sums up the ultra violent state-of-mind that the great man was capable of conjuring. Nowadays this would probably lead to a boycott of something somewhere and a mass of Twitter reactions. Back then, nobody seemed to bat an eyelid at this or the album when it eventually dropped. 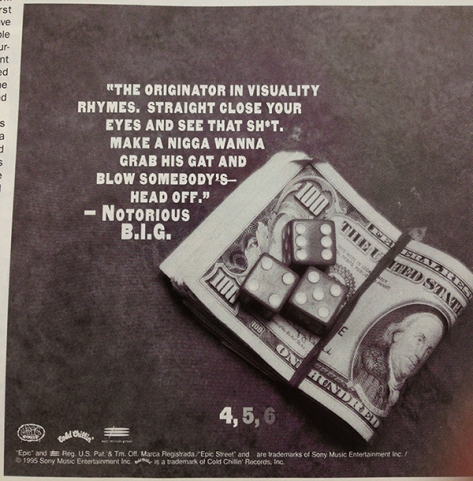 According to my friends at Proper, Champion is on its way back in the United Kingdom, but looking at their £65 sweats with the SuperDry style prints and how they’ve even flubbed the U.S. college gear, I’m not sure what to make of it all. It’s definitely a collection that had me pulling the Michel Roux Jr. faces. Recently I was discussing whether there’s actually a “real” Champion out there or whether it’s just a mass of regional licenses. How can it be that Nick and Stalley’s Blue Collar Gang BCG creation that’s printed on a middleweight Champion blank with the C on the sleeve ether an entire brand’s local output? Somebody somewhere really doesn’t understand the power of simplicity their company holds. I feel that the bin-shoe I spotted on Friday in Greenwich Village sums up my feelings on this situation, but I retain a single spec of optimism that somebody might get it right at some point in the next twelve months.

Swallow Magazine takes its time with the rollout, having hit issue three in just under four years, but it’s one of the best food publications in terms of capturing the visceral pleasure of stuffing your face. Concept heavy with each issue, after the Trans-Siberian edition, the hardcover is gone in favor of different binding, more content and a scratch and sniff Mexico City theme throughout. The whole food obsession seems to have boomed since it last dropped, so publicity for the new Swallow Magazine installment has been more substantial than before. Protein ran a little show in their gallery to celebrate the release and this interview with the magazine’s founder and editor James Casey is pretty good. He raises some interesting points on print as an object of beauty and a method of administering experiences a digital medium can’t deliver quite yet. 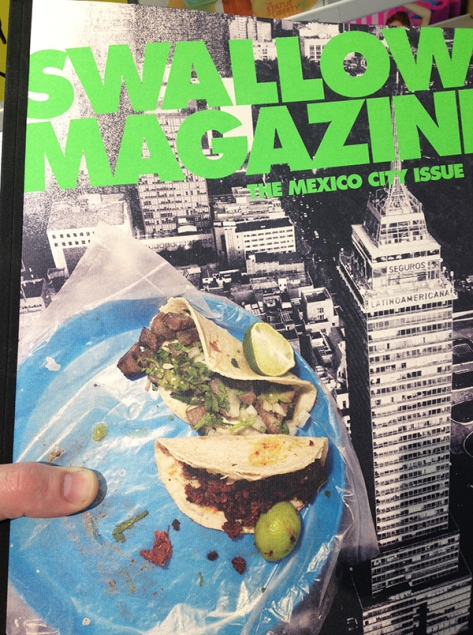 With the passing of both Chi Cheng and Jeff Hanneman this year, it’s a good time to reacquaint with some metal classics as a tribute to their work. Jon Wiederhorn and Katherine Turman’s Louder Than Hell: The Definitive History of Metal is a reason I’m looking forward to my next birthday. This and the French Montana album are a good reason for me to not spend the day traveling to a Swiss clinic. Oral histories are addictive and metal is a breeding ground for anecdotes on anecdotes on anecdotes.

Dominic Stansfield has officially ended his Stansfield brand. It’s a shame. In a world laden with repro, pseudo old world efforts, he’s a standout character who really understands design, bizarro reference points and the power of imported 1990s skatewear. Stansfield was one of the best brands this country — and his Rushmoor line before that remains underrated too. It’s important to celebrate the masterminds who’ve weathered trends and reached Jedi levels of garment overstanding like Dominic, 6876’s Kenneth MacKenzie and Garbstore’s Ian Paley. I occasionally feel that I don’t celebrate the work of UK brands enough, but I feel the majority are piss-poor. After maharishi seemed to take a nosedive a few years back, I’ve had little luck connecting with any Brit streetwear lines at a similar level. Print tees with Brooklyn Kid fonts? Give it up. If you’re lucky, UPS or Royal Mail might be hiring.

Stansfield made some fine outerwear and shirts. The car coat was particularly amazing, while the jacket above seemed to channel the reference point blend and bring something new to the table — the solitary fireman’s jacket clasp evokes memories of the jackets Treach would wear in 1993. His blog was a fascinating insight into the mind of someone utterly obsessed with their work. Some of the military and film reference points were stunning and the gear that emerged reflected that obsession.

The blog carried a final message a few weeks back where Dominic explained, “I think its time to move things on from this over-saturated wax jacket, heritage, workwear etc. bore fest.” It looks like he’s set to go technical with some projects primed for 2012. It’s a shame that the reverse weave sweats he mentioned a while back (that I’d heard about from multiple sources) never appeared, but perhaps the impending American sportswear themed brand he mentions in that post will be the outlet for them. Salutes to a mastermind who knew when to bow out and reinvent.

Dominic’s decision doesn’t seem to be affecting the direction for some other brands (In fact, I know for a fact that a rep for a brand recently announced that they were moving from sportswear in favour of “workboot styles”) and if the workwear movement continues, I hope a dearth of ideas ultimately leads them to August Sander’s ‘People of the 20th Century’ or Irving Penn’s ‘Small Trades.’ Sander documented some great characters across classes in those books, but I want to see wax-jacketed farmers and chore coated railroad types superseded in cool-guy hotspots by looks taken from Penn’s cheese seller, deep-sea diver and best of all, the steel mill firefighter look, which oddly, reminds me of the flame-making protagonists of some grindhouse favourites like ‘The Exterminator’ and ‘Don’t Go in the House.’ I hope the 1951 steel mill firefighter look hits streetwear and trickles down to the Superdry/Top Man consumer. 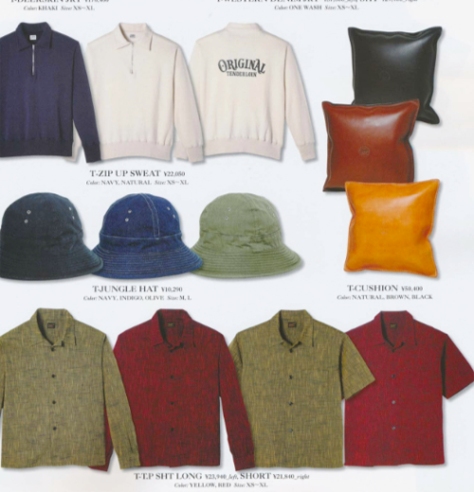 In all the excitement over Visvim’s zillion pound Native American themed collection for a SENSE photoshoot earlier this year, I hadn’t realised how good the new Tenderloin range was. For some reason, I find myself feeling a little more sentimental for Tenderloin goods than the majority of other Japanese repro brands, simply because they remind me of working within proximity of the Bond International store, and the sheer volume of tattooists from spots like Frith Street who proved that good gear just doesn’t date. I’d been led to believe that Tenderloin had reached its final season. I’m not sure who’s running it — Kei left, but I’m assuming that Koji and Nishi are still on board.

That sentimentality is amplified by the brand’s roots in London and Los Angeles circa 1997 and the fact the brand maintains a certain mystique – even in an era where every stitch visible from blog to blog in high resolution. The cushions and shirts in the range are great, but that deerskin jacket is a thing-of-beauty. I recently read up on a meat market and deli in Minnesota that does a sideline in affordable deerskin gloves, even though we fawn (pun intended) over it as a premium fabric, but the design of Tenderloin’s jacket is extraordinary. Then I found out that 176, 400 Yen translates as 1,269 pounds before shipping and tax. I’ll leave this one in the dream coat wishlist for the time being.

It’s been interesting to see hip-hop’s reaction to the Mister Cee story all week. dream hampton’s Tweeted revelation that Biggie’s boy Mann (as seen in the classic Timbs and dice image that’s adorned many tees — I first saw that shot in Cheo Coker’s ‘Unbelievable’ book) was gay. Remember 2Pac bodyguard Frank Alexander’s tales of ‘Pac getting greeting kisses from Gianni Versace in ‘Got Your Back’ finished with Alexander’s comedy disclaimer, “…I don’t play that shit — even with Versace”? Couple that with the fact that several of the culture’s pioneers were gay or on occasion, “gay for pay” according to some very reliable sources (and I’m not going to dry snitch), it throws hip-hop’s age-old homophobia into a state of fresh debate. After hunting the “gay rapper” since ‘One Nut’ ran their story, it’s all turning gay — like the steelmill/Anvil nighclub from ‘The Simpsons.’ Anything that infuriates screwfaced puritans is alright with me. Hip-hop needed a group outing.

Quick blog entry because alas, time is at a premium. We just got interviewed by some guys from The Source – unlike Mrs Wallace, my mum probably won’t smile excessively should my mug pop up in the magazine. With that opening in mind, it’s worth casting our minds back to ‘94 when we were waiting on ‘Ready To Die’ to drop – what I’ve been pondering is, was a UK fanzine the first publication to give Biggie a cover?