If you’re looking for anything longer than a few paragraphs tonight, go look at this piece on Hypebeast instead (if you’re a Jordan/LeBron signature series fan). I think I forgot to mention that the NBA seemed to be a far more brutal place in 1990, where MJ would have to face bruisers like Charles Oakley and Bill Laimbeer — I’m not sure if LJ could flourish in that climate. That proven ability in a more extreme incarnation of the league gives his franchise extra value.

I think our Reebok Shoe drops in a couple of weeks. Shouts to Reebok for letting me put a prison and borstal theme (it’s envisioned as some kind of standard issue footwear in a jail from a parallel universe where sportswear brands vie for shoe contracts*) on a Reebok Classic to let me homage the shoe’s less salubrious past in the UK and overseas. I apologise in advance for it hitting the £100+ mark too (I think that’s what it retails at) — I wanted amazing leather and a custom stitched canvas material and forgot that they both cost more, which can happen when you’re given full run of the factory fabrics creatively. There’s stories to it (more on that next month) but I’ll be damned if I’m giving it a nickname. I like this prison arrow intersection at the front a lot though. 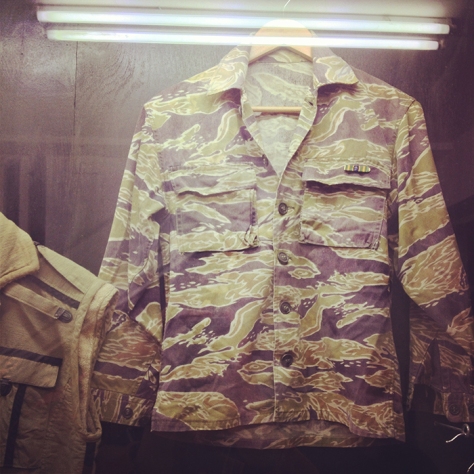 Visiting the Black Market Clash exhibition earlier this week, seeing Paul Simonon’s broken bass from the London Calling cover was cool, but the tiger stripe camo shirts (among other military gear from the Combat Rock period of the band’s history) was a personal highlight. The Sandinista and Combat Rock era was a great little subcultural intersection — between Futura, that camouflage picture disc and Strummer onstage with the Travis Bickle inspired hairdo and tiger pattern in 1982, a lot of my favourite things converged right there. And that’s before we even discuss the great music or the hours I’ve spent trying to make myself enjoy Alex Cox’s Straight To Hell. The Clash were the best dressed band of all time and it’s good to see that Mick Jones and co can still dress, rather than degenerating into picture postcard punks with receding temples. The Google Play videos on that period are interesting too.

*I just made that up.