This blog should probably become bloggingaboutchampiongearidontownagainandagain.com, but it’s my blog, so if I want to get stuck in the mud and dwell on one topic, I will. Nobody told me about the existence of this sweatshirt — I knew about last year’s Stussy collaboration on that slightly fussy M-65 style tracksuit employing Windstopper, but this ARMY Reverse Weave hoody in Oshman’s is the best Champion Windstopper design yet. Trying to give basic fleecewear technical properties is problematic. Angular, stiff fanciness defeats my primary purpose for putting a sweatshirt on. If a DWR treatment can’t sustain regular washes, it’s pretty pointless and if you can’t breath through the sweatshirt, it becomes a suffocateshirt. Water resistance has never worked for me on these garments, but Gore’s Windstopper protection layer makes sense and doesn’t infringe too much on the hand feel of a sweat. It’s good to see two technologies with over 50 years between them (I think this might be the Windstopper patent, a technology that officially debuted around 1992 while the 1938 patent here is a Champion one that seems to be focused on a Reverse Weave style technology). Pop fastenings on the collar, ribbed side panels, minimal vertical shrinkage, but annoyingly small Japanese sizing — everything that intrigues me about the work from a licensee that just does its own thing with a certain finesse. 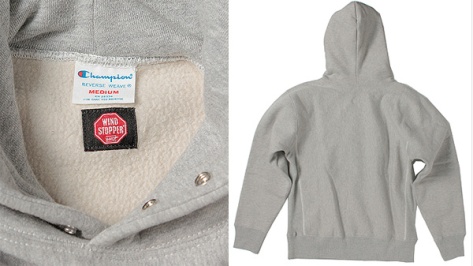 The ‘Vintage Menswear’ book by Josh Sims and The Vintage Showroom’s Douglas Gunn and Roy Luckett is good value for money. If, like me, you lay down £20 on a Japanese magazine covering similar ground just to gaze at the photos, the 130 items here and accompanying copy is a nice antidote to keep on the shelf. I’m still stuck in the military chapter, where reversible German mountain parkas, custom military greatcoats, eccentric footwear innovations, a truly remarkable Aero Leather company B-7 sheepskin flight jacket and a lot more deliver enough insight for an idea-free clothing brand to get at least 2 years of designs out of it. The notion that the British Army’s Paratrooper’s denison smock was painted with a non-colourfast ink so that it might fade in enemy territory and give the wearer a different kind of concealment by letting them blend in with civilians (though it’s just a rumoured innovation) fired my imagination. I had no idea that the reddish applications to brushstroke camo on the Indian Army paratrooper’s smock dated back to the 1940s — I thought they were a 1970s treatment to the (to tie it to the Windstopper talk, the Denison jacket design’s spinoff was the lighter Windproof smock) pattern. All of which goes to show that I know nothing about camouflage. Go buy the book and get educated — it’s bitesize pieces rather than an exhaustive history of anything, but the spotlight on the details. 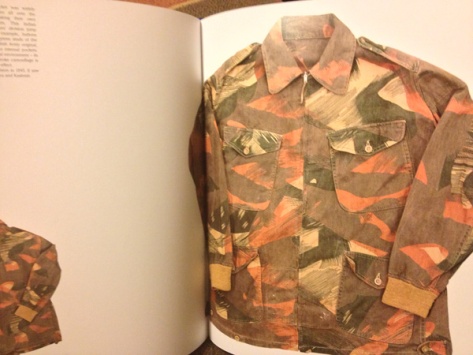 Who else used to buy magazines for the tapes? ‘NME’, ‘Select’ and ‘Melody Maker’ seemed like better value for having them on the cover, even though I never listened to them. ‘The Source’ had a good Rush Associated Labels one attached in 1994 and on buying ‘Fantastic Four’ #376 in a mysterious polybagged pack for the tape, I was introduced to the mighty ‘Dirt’ magazine. Then dad-mags like ‘Q’ got all fancy and stuck CDs on their covers and by 1996, the cover cassette was done. Few genres justify continual use of a long-gone, labour intensive object like the audio cassette like doom metal does, and UK-noise bible ‘Terrorizer’ gave away a couple of CDs this month, but throwing Dorset-based stoner-doomers Electric Wizard’s new EP in as a tape was a glorious flashback to the newsagents of old. It was a shame that only select issues got it. It’s also a damned shame that I don’t own a tape deck any more.