Seeing as it’s already midnight I’m just going to post that Daft Punk promo. I’m just fucking with you. There should be some kind of cut-off or late adoption aggregator that stops people posting the same goddamn thing just to get those page views from getting free shoes or press trips. I like all the people who call Daft Punk EDM now though, because the EDM term really reminds me of 1996’s perpetually delayed VHS embarrassment Vibrations (“Their love erupted from the electronic underground”) where the cool guy from Twin Peaks loses his hands, performs as a masked performing robot character (like Thomas and Guy-Manuel) called Cyberstorm, culminating in the best depiction of live dance music ever. I hate people that sneer about films being so bad they’re good, but Vibrations is like 1983’s Joysticks in that it feels like it was made as a parody of a craze cash-in and bears no resemblance to a human experience. Viewing it is like a sweaty flu dream — it could break into hardcore porn at any minute or descend into Nic Roeg-esque insanity. But back to Daft Punk, today I got retweeted by Paul Williams — as a Phantom of the Paradise, Smokey and the Bandit and Bugsy Malone fan, that was awesome. To hear that Williams is working on the new album made a lot of sense, because we all know that Swan, and not Cyberstorm, was the true mask inspiration.

You know what was better than any lookbook or careful photoshoot? Old skate magazine ads. I frequently cite fact as a vast inspiration on me and Erik’s Rizzoli tome will be proof of how good much depth the brand has and how good he is as an artist, but here’s some ads to pass the time. Back when the brand was World Industries affiliated I remember the more sexualized stuff in Big Brother (plus a superb Absolut parody) but after Erik split from Rocco, the ads from mid-1993 took the step of calling World Industries out for using fuct designs. Then, in late 1993, the next wave of ads kicked off in Thrasher, starting with that list of fuct’s favorite things. I remain a huge fan of Steve Rocco’s copywriting, but that fact Profanity is Profit ad, with the slick look and mass of labels, plus the dealers only and kids only contact details? Classic. Here’s a selection of fuct ads from late 1993 to early 1996 that includes sister brand Dorothys Fortress too. 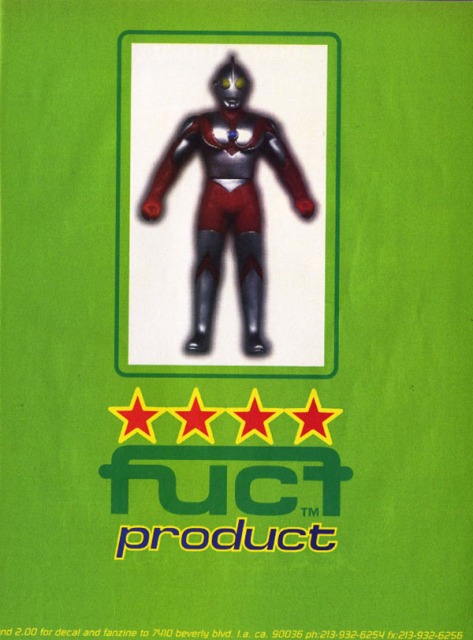 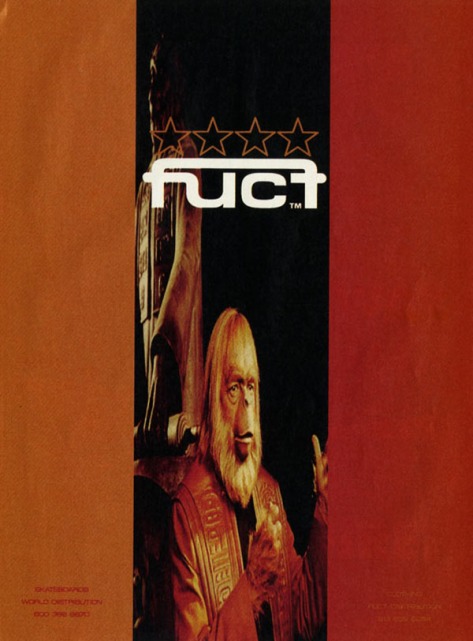 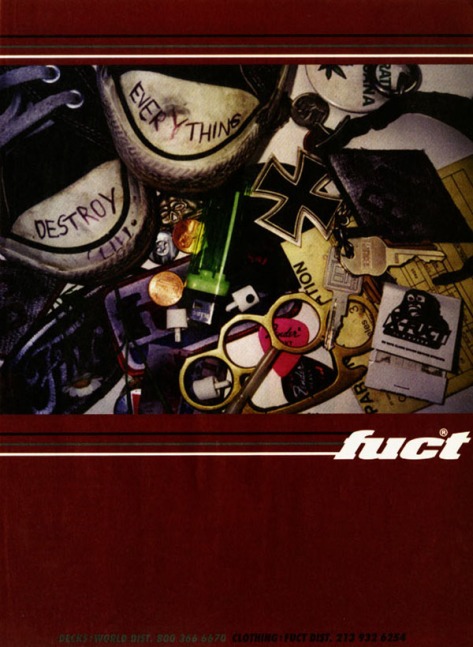 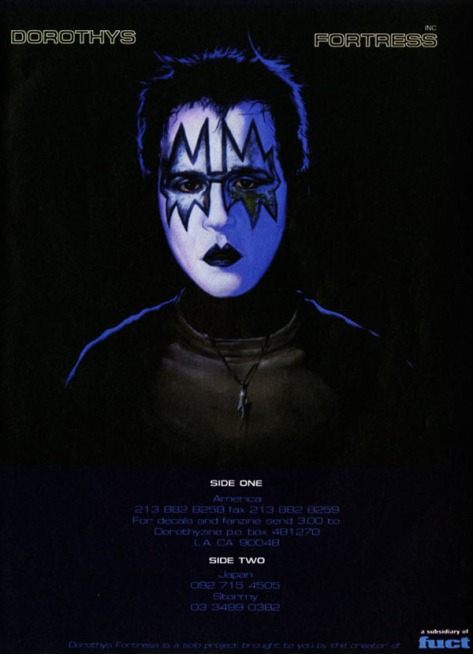 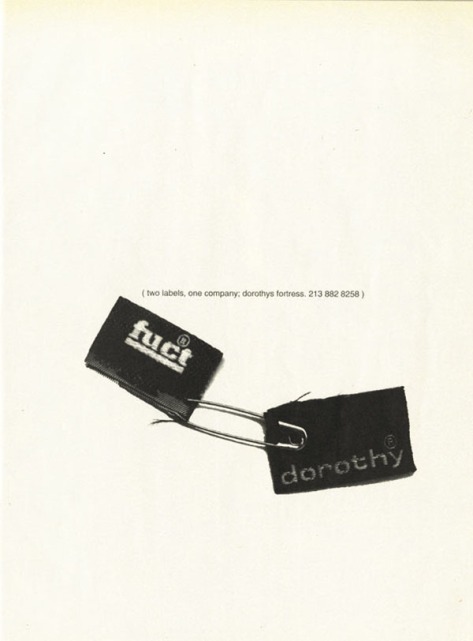 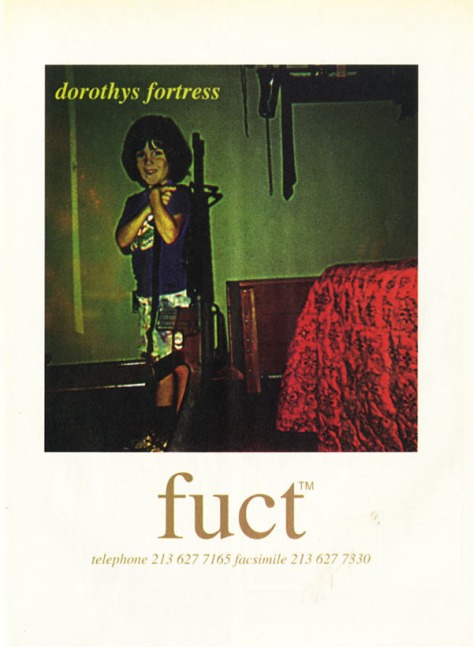 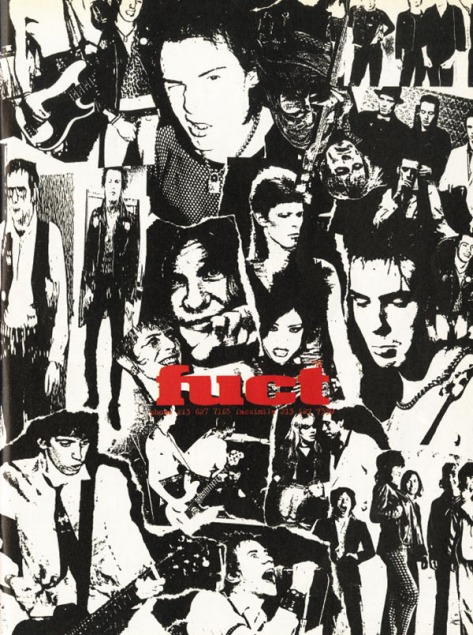 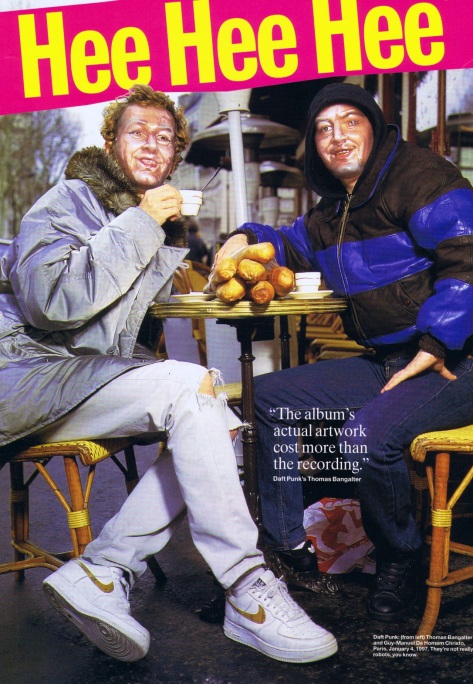 There’s more interesting things to read elsewhere on the internet, whether it’s this sequel to Complex’s Alchemist sunday sessions or a debate about whether Politic borrowed Palace’s VHS aesthetic. You could also watch a collection of demonstrations of Errolson putting on jackets and strapping up bags extra precisely, including the 2004 video. Or you can watch the “holiday shout outs” section of these 1990 Elektra party footage, where everyone looks super young and has amazing jackets. Remember when we Brits couldn’t get Air Force 1s and had to marvel at them on folks’ feet from a distance? I still don’t understand the ill will towards the mids, but I’ll concede that they look their age (even though they’re 12 years older than the other heights) highs and lows are still the ones, ever since I obsessed over the black soled highs in i-D back in the early 1990s that were stocked in Passenger on Beak Street.

After they arrived at Foot Locker in the UK and JD Sports in a slow rollout between 1998 and 1999, the explosion on UK shores was significant, reaching an apex with JD’s 2004 and 2005 exclusives. Seeing Vans Eras with tracksuits still throws me a little, but they seemed to invade the AF1 market in the UK. Any rumour of the shoe’s demise can be batted away by the fact the white on white and black are still some of the bestselling shoes in Nike’s business and that whereas the Dunk’s hype was largely fueled by a late 1990s fixation beyond a core few and subsequent retro, the Force had only been totally unavailable for a couple of years during its lifespan, giving it some serious sub-cultural credentials. Bizarre to think something that looked so space age on it’s debut, became a superior “dad shoe” of sorts after it hit 25.

I still think the canvas 1995 SC versions and the 1996 SC (which I’ve long believed stood for “Sports Classic” unless anyone wants to shoot me down on it) snakeskin duo of Air Force 1 are legendary, regardless of your opinion of the shoe. Who made the snake colourways back in the mid 1990s? How were colourway and retro departments being operated? The Ivory and Obsidian editions with the ‘NIKE AIR’ are still objects of desire for me and before they went robotic, but not before the masks went on, a January 1997 Daft Punk photoshoot featured Thomas Bangalter sporting the Ivorys (Guy sticks to black Stan Smiths). If these had an Ivory outsole, just as the Obsidians had the matching sole, I’d have spontaneously combusted.

Daft Punk never cloned these for their Bapestas (though there were plenty of other similar Bapestas) and their stockists and availability eluded me until I saw them a few years later, shrink wrapped and out of my budget. Truth be told, if I had them, I’d never wear them, so some things are better left as objects-of-desire than dusty owned items taken from their golden, glowing pedestal and sat in a black and red box with the other 999+ shoes I don’t wear very often. Still, it was one of the shoes that convinced me that simplicity beats gimmickry and it distracted me from my 1995/early 1996 preoccupation with the original Air Ndestrukt for good.

For all the fond regard trickled its way, Brian De Palma’s ‘Phantom of the Paradise’, a garish satire on how corporations make anything real into a blister packed mockery of its former self, and a gloriously lurid ‘Faust’ and ‘Phantom of the Opera’ takedown doesn’t get the treatment it deserves. Except in France. The French will take a cinematic ugly duckling close to their chest, and thanks to licensing and an effort to recruit swanarchives.org – arguably one of the best movie fansites online, Opening’s new hi-def print of the film, an ‘Ultimate Edition’ has made it to Blu-ray. While in the UK and US we’ve had to make do with a bare-bones budget digital travesty, complete with some phony trailer for the film, this is actually the second French all-singing and all-dancing (but still no angry De Palma commentary) version our Gallic friends have had a few years back the Hollywood Classic Limited version did the movie proud, and while some films don’t necessitate a mark-free transfer, this most certainly does.

The audio is stunning, and those visuals are as eye-bleeding and faintly disturbing as ever. The outfits and production design are still some coked-out madness, and if any film benefited from being given a full yayo-mirror shine, this is it. Respect to the French fanboys and cinephiles who saw beyond the flop reception in 1974, gave it an award at the Festival du film Fantastique and pushed for this release. All other film going nations should hang their heads in shame. Bar a new introduction from Gerrit Graham the extras here remain the same as the Hollywood Classic version, but the quality here could put your hair back like the Maxell ads of old. ‘Somebody Super Like You’ never sounded so good. The beauty of ‘Phantom…’ is that with that disturbing, experimental camp, it could’ve attracted legions of dress-up midnight movie imbeciles, yet, like ‘After Hours’ or ‘Sorcerer’ you still feel a curious kinship with fellow fans that hasn’t been wrecked by ironists.If you like this film, you’re alright with me. If you don’t, fuck you…fous le camp.

An early example of Brian doing true spectacle, he remains a phenomenally underrated director, deserving of more than lazy Hitchcock-lite allegations. Master of set pieces (exploding Cassavetes being a personal favourite) the whole of this film feels like one long giddying set piece, and a pretty on-point tear up of the music industry of the ’70s. Beyond that, and far beyond the fantastical then-contemporary fable status, the notion of master douchebag Swan pilfering ideas from unknowns and leaving them to get crushed by the scene’s machinations, is a fair enough fable for the fashion/blog…whatever scene you might reside in. There’s a prick magpie picking ideas at the top of every tree. That remains relevant.

The ‘Paradise Regained’ documentary, included here, is a good insight into the whole ‘Phantom…’ saga. The promo materials from Richard Corben and Neal Adams are further evidence that even the best artists on the promo tip can’t save your flick from bricking. Once again, go check the Swan Archives again – they’ve got their own out-takes and behind-the-scenes footage – they’ve even got details on the unreleased ‘Death Records’ cushion from Medicom.

‘Phantom of the Paradise’s enduring appeal across the pond seems to be one of the pop cultural DNA strands that formed the generation of overachieving hipsters France produced. Thomas Bangalter and Guy-Manuel are superfans of the film, bonding over a shared love and repeat viewings – those Hedi Slimane suits were straight-up Phantom attire. Justice’s ‘Phantom’ might have reused Goblin’s ‘Tenebrae’ soundtrack, but was there some link between that, and another Goblin-scored Argento film, ‘Suspiria’ that also starred the beautiful Jessica Harper, ‘Phantom’s female lead and muse, Phoenix who inadvertently instigates mayhem? In fact, are the group Phoenix named after Harper’s character too? Sebastien Tellier’s ‘Sexuality’ album contained a tribute to the film’s soundtrack on ‘Divine’ and there’s some Swan stances in Bob Sinclar’s ‘I Feel For You’ video. There’s more examples of homages out their too – but this film seemed to strike a chord with France’s creative community at child-age. Go buy this disc.

And seeing as it was mentioned earlier, Josh Olsen talking over the equally misunderstood ‘Sorcerer’s trailer on Trailers From Hell late last week was a treat too. Josh knows.

I’ve been thinking about ‘Tron Legacy’ a lot today. Here’s a spot of cinephile autobiography: I can break down my entire existence film by film. Officially, the film that I love the most is ‘The Outsiders’ but for all-out impact for the last twenty seven years the film has been ‘Tron.’ Why? Because it made me into a heathen. Before you assume it’s because this computerised ’82 epic made me contemplate our role in the world, technology’s prominence as the new god or Flynn’s faithless conquest over dark forces, it wasn’t that. I was four for fuck’s sake. On the run up to the film’s release I got hyped. Probably more hyped than you’ll ever know. Sick. Ill with the hype. So much so that my folks began to worry that I could be autistic.