It’s good to see that the Reed Space’s ‘Reed Pages’ has reached issue one with a more substantial, perfect-bound offering than the launch edition issue zero all those years ago. I know I’m prone to assuming cancellation when follow-ups aren’t forthcoming, but almost two years is quite a gap. Just bear in mind that Mr. Staple is no stranger to printed matter.

It’s worth taking this moment to take it back to a time when you were still mildly optimistic about Rawkus releases, when Zab Judah was on the rise and Gravis Tarmacs (were they co-designed in any way by a pre-Visvim Hiroki?) were still a contender. ‘The Fader’ does an excellent job now on the music front, but in 2000 and 2001 it was a bible to me in my Bedford residence for matters of style too. I was more than happy to shell out around £6 an issue at the Piccadilly Circus branch of Tower Records in the hunt for this title and ‘Mass Appeal,’ ‘LODOWN’ or the lesser-spotted Transworld spinoff, ‘Stance’.’

These were pre-blog (shouts to the Mo’ Wax bulletin board massive, Spine Magazine, Rift Trooper and Being Hunted though) days, and if I saw an article I liked, it got memorized like rap album thank you’s. Jeff Ng’s contribution to the editorial side of early issues (the jeffstaple design was excellent too) gave us some English-language profiles of brands, product and people that had been confined to Japanese publications like ‘Boon’ and ‘Relax.’

It’s always nice to see the smart Supreme advertising that ‘The Fader’ carried, but Jeff’s 2001 Paul Mittleman and Hiroshi Fujiwara/Nike Japan profiles from issues #4 and #5 were very strong and resonated with me for some reason. The Hiroshi piece places plenty of emphasis on an innovative early ’00s boomtime—the Monotone collection white/green Terra Humara are something I’ve looked out for ever since in a US10 and the Air Max 120 remains underrated. Paul Mittleman’s recurring Arc’teryx coat and the shots of the never-bettered Dunk Lows (reissued next week) that built on his appearance in ‘Stance’ talking about the same shoe.

I spilt coffee on issue #4 of ‘The Fader’ and lost it when my mother culled my magazines left in her loft back in late 2002. Since then, I’ve been looking to read the Hiroshi article again (I’m sure that at one point it used to reside on its own http://www.fader.com/hiroshi URL). Then the homie Masta Lee at Patta saw my Tweeted plight and hooked me up with scans of the piece—props and praises to him for that act of kindness. Shouts to Jeff and the Fader for creating some essential content that resonated with an info-hungry freak like me. 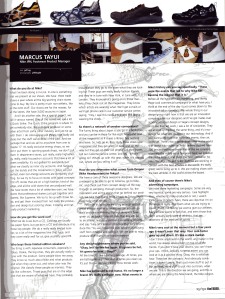 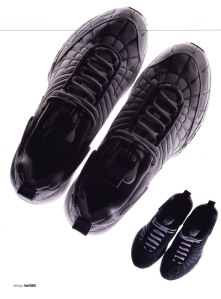 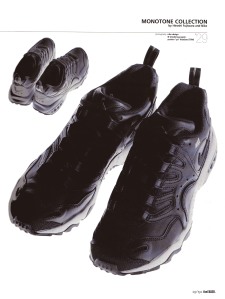 Just because I think some folk need to deal with hip-hop’s progression doesn’t mean I feel some UK legends deserve to exist in a netherworld where their names are only uttered by the older generation during talk of the olden days. I think most of the current wave of UK hip-hop that’s broken through is still a crappy imitation of our American brethren, and while I appreciate that men rapping about demons over very fast Bomb Squad-style production isn’t going to cut it any more (maybe in some other parts of Europe, but not here), I love to see some of the old guard who made some classic LPs and reinterpreted rap on their own terms deserve some shine.

Take Hijack for instance—they had one of the best visual identities of any British band, but remained a cult favourite due to label politics—or MC Duke, or labels like Kold Sweat or Music of Life. There was a vitality to these names in their heyday and a sense that they’d go far to rep our nation at a point when hip-hop truly hit the mainstream circa 1991. Some are content to talk it up and simply recollect, some feel that they’ll give Giggs and Pro Green a run for their money at some point (still labouring under the misapprehension that their time is coming) and others entered a bigger industry and made a buck by taking off the blinkers and branching out. Respect to former HHC editor Andy Cowan for starting Original Dope—a label dedicated to reissuing old British hip-hop albums in remastered, repackaged and expanded form. Ruthless Rap Assassins, Blade and MC Duke fans should be delighted.

I remember the merchandise pages in Blues & Soul, HHC and several LP sleeves, but who was going to entrust their cash or postal order to some mysterious P.O. box address? I got my fingers burnt several times over the years, but I always wanted those mysterious tees and sweats that groups and labels promoted. Then there were the acts that should have had tees, but never did. What’s the solution? Officially licensed UK rap shirts from Style Warrior UK. Back in 2006 I spotted a MySpace for this UK label but missed out on a Hijack shirt…then I was outbid on eBay for it twice. Now it’s back—Overlord X, Son of Noise, Gunshot, M.C. Mell’o’, Music of Life (and there’s an excellent breakdown on their logo on the site), MC Duke, Silver Bullet, Kold Sweat are reliving their youth on cotton in a remarkably well-designed way, and there’s even two Hijack styles to pick from. The blog’s very good with some video links to the old ‘3rd Eye’ video magazine, talk of Stereo MCs and Cash Crew tees on the horizon and a history of the Demon Boyz logo too.

Today’s actually the cut-off for picking up the Hijack ‘Style Wars’ shirt. I assume there’s some rapidly aging fuckers like me who bug out at that kind of thing. It’s up there with the Japanese BBP licensed Showbiz & AG tees from five years ago in the very necessary stakes. Props to all involved. 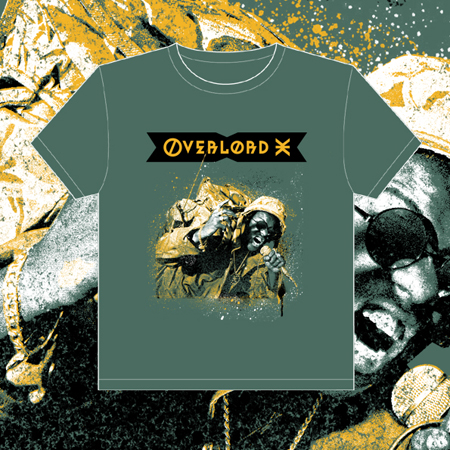 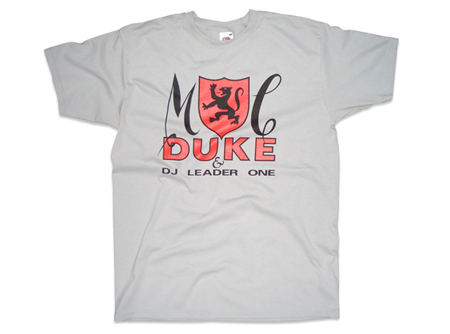 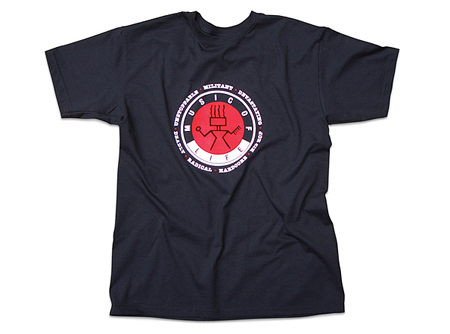 Thinking about Nike endorsements, one of the most extensive one-man brand examples actually comes in the shape of an athlete’s father—Jim Redmond, the dad of Derek, who memorably accompanied his stricken son to the finishing line of the 400 metres in the 1992 Barcelona Olympics. From the “Just Do It” hat to the Huarache t-shirt, socks and 180 running shoes, Jim was Nike down that day. I’m not 100% sure if the shorts were the brand’s own, but in late 2002 I bumped into him at an event and asked if he’d sell me the Huarache t-shirt. He laughed deeply and wandered off. I don’t think he realised that I was being serious.

It’s no surprise that ‘Confessions’ (‘Kokuhaku’) has been nominated for a foreign-language film Oscar. It’s a unique, strange, overblown, almost operatic blast of human misery, but it’s also one of the most beautifully shot films I’ve seen in a long time. The entire film pretty much moves in a stylized slow-motion, but it doesn’t jar or de-humanise the hyper-emotive nature of the film. Best of all, it relies on certain facets of Japanese culture that would confer any attempts at a Western remake to failure status.

I’ll confess—I have no interest in riding a bike at any time in the future. I lack coordination and live in a town where the roads simply don’t want to accommodate car and bicycle at the same time. It’s a democratic mode-of-transport though, and for some reason, that seems to breed great journalism. ‘Rouleur’ is awesome and ‘The Ride’ journal is good too—from the ilovedust covers to the 700 word stories and accounts of bike experiences, brief interviews and fine photography, it’s evidently a painstaking production. I can’t be arsed to take foot to peddle, but cycling is such a broad church—far more than Eras, rolled up Uniqlo chino legs and fixies – that it generates absorbing and eclectic reading matter. It’s available at Albam, Howies and some other spots right now. Anything with a piece on 1960s Eastern Bloc cycling artwork that adorned matchboxes is worth the expenditure, plus all profits go to charity. It actually makes me want to take a ride, and only the knowledge I’ll end up under the wheels of a bus within an hour discourages me…

Between the day job and copywriting today, today’s blog is particularly aimless. Stuck between regressive and attempts to stay at least moderately progressive, my mind’s been on sports footwear. This blog was originally created as an outlet for things that aren’t shoe related, but I can’t deny my admiration for shoe design when its done right. Google Patents has been a godsend for studying the legal nitty-gritty of brands in general, and on the running/basketball/training shoe front, as brands battled in the technology wars of the late ’80s and ’90s, the sheer volume of patents filed was staggering – its on this, another of Google’s glorious timewasters, that you can see the original sketches of core elements that made up classics.

The imagery below is strictly for the nerds and fellow oddballs out there, but design-minds might get a kick out of it too. Good to see that Nike took the development of some of the stranger late ’90s performance pieces now cemented with a certain cultdom and misty-eyes on mention from types who spent hours poring over beat-led stoner music and Project Dragon once-upon-a-time. I’d really like to know more about this though.

You can tell me that sneakers are done while you slide around in your brogues in slapstick fashion, but when it comes to the more ambitious side of shoes with Swooshes, and messrs. Clarke, Hatfield and Lozano were feeling particularly inspired, you got the design classics. Looking at them as component parts here, I appreciate the damned things even more.

As a small, partially-related digression, while this retrospective is more fun than the actual movie, Spike Lee’s ‘School Daze’ doesn’t get the shine it deserves from an apparel standpoint. Custom adidas sweats? A prolonged Jordan II cleaning scene, and while I could pretend I clocked them in ‘Public Domain’ or on Jack’s feet earlier in ‘The Witches of Eastwick,’ is that a pair of Dunk Hi’s I spy as part of the most pauseworthy ensemble of Spike’s directorial career? If you’re gonna rock hi-tops, best not to combine them with daylgo Speedos that even the House of Xtravaganza in ‘Paris is Burning’ would deem a bit “much.” What’s with all the briefs at a pajama party? For me, reeling from the heavy-handed message at work, it was a curious introduction to a shoe that became a phenomenon.

The reason I’m dropping some truly gratuitous screengrabs is in tribute to the homie Jonathan Rockwell’s ‘A Fist In The Face Of God’ blog, mixing screencaps with a true knowledge of black metal, thrash and legends like Saint Vitus. It’s one of the best sites out there – big things a ‘gwan this year for team ‘Fist.

Part of the Jordan XI designed by Tinker Hatfield

Sorry. Couldn’t find one piece of info for a blog on Soho books and literary influence. So I trawled the harddrive in the meantime and found this rambling nonsense. Apologies that it’s based around athletic footwear, and apologies that it makes sweeping generalisations, assumptions and swoops across entire histories incoherently. It was scrapped for that very reason. In fact, reading back through it, I hate this piece.  It does however, fill my OCD for semi-regular blog updates and allows me to sleep tonight.

Even if you’re a blog scribe, hardened by the occasional bone thrown by brands to keep your tail wagging and your site as sycophantic as possible, there’s a sense of righteousness that makes itself known when fakes get discussed. Mainly because regardless of how many decades spent poring over Far Eastern catalogue magazines, store shelves and Runner’s Worlds, the majority, whether they care to admit it, have had their fingers burnt by unscrupulous imitators. It’s a climate of fear.