So, print’s demise was down to most publications turning terrible these last few years? I can buy that. It’s a theme that crops up a couple of times in the new ‘Gym Class Magazine.’ I won’t pretend I’ve picked up this magazine before – I’d seen the covers of earlier issues, assumed it was a gay-themed magazine and then paid more for something perfect-bound and defiantly hetro that I never actually read. Stupid me. I was wrong about the theme of the magazine (but as Jerry and George were keen to maintain, “Not that there’s anything wrong with that”) and I suspect I’ve missed out on some print fanboy masterpieces.

This magazine sits alongside ‘Manzine’ and ‘Proper’ as a fanzine-style affair that get more reading time from me than ad-heavy creations 10x bigger. Issue seven’s George Louis homage cover drew me in and the subsequent interview is excellent. It’s good to see former Pointer designer Rose dropping knowledge and the chats with Rich Boat of House Industries, Guy Andrews from ‘Rouleur’ and Simon Mottram of Rapha are non-fawning, deeply informative affairs. The whole publication is affiliated with the very necessary magCulture site and while there’s extensive talk of design and papery matters, it’s far more than that – once underlying them is the precision and obsessiveness of those highlighted.

The chat with ‘Monocle’s Andrew Tuck provided enough background and enlightenment on Tyler and the crew’s business model to bring back March 2007’s level of enthusiasm with regards to a publication I’d been stacking but barely reading. There’s plenty of ‘Monocle’ coverage, whether it’s jabs at the ideal of a perfect shopping precinct where an aged craftsman proffers a wave and update on the progress of your bespoke breakfast table as you wander towards a local coffee shop that serves jet-black espresso shots in a very specific kind of cup (I have been known to grimace at the monied twee-ness of it all) or fawning about the fucking podcast. But this certainly upped my appreciation for what’s clearly a lot of work – and the imitators miss the point somewhat.

Still, while the magazine is back in my life, the “Monocle man” in all his Aryan woodcutter finery and grooming can fuck right off.

A brilliant magazine worth supporting…and for once, you may find yourself actually reading something you’ve bought, rather than solemnly nodding at a picture of a coat. Those behind it obviously spend a lot of time preoccupied with monthlies, weeklies, quarterlies, bi-annuals and those strange labour-of-love publications you assume have gone under that reappear all-of-a-sudden with little fanfare. That preoccupation seems to have fueled some superb writing, editing and design.

Shouts to the Platform crew, Mr. Stan Still of T-Shirt Party “e-fame” and Nina Manandhar for being the sort of folks who put an idea out there and come through with a polished final product. Video lookbooks make me want to vomit up a lung and they feel the same. As a reaction they’re trying to bring back the street style video, with a nod to the olden days of that one good look on ‘The Clothes Show’ or the outfit that got the Mr. Normski co-sign on ‘Dance Energy.’ I’m looking forward to seeing where they take the project, entitled ‘I Saw You Standing’ but it’s certainly placing an emphasis on those who – unlike me – don’t spend their time twatting about on WordPress babbling about cultural pointlessness. Those are the people who make for interesting video portraits.*

Jacket and big boot season is officially here. Not a moment to soon. Fools complain about southern England’s light dusting of the white stuff. For anyone who’s been waiting to replace canvas and cotton with something a little gnarlier, it’s time to justify all those strange excuses you bandied around before breaking out the credit card. I’d like to salute Arc’teryx Veilance on the Patrol Insulated Coat for having some glorious contrast between GORE-TEX gloom and the burnt orange lining. The attention-to-detail is, as with all their output, unnerving yet unfussy. Even the removable lining makes for an excellent jacket in itself. Jackets within jackets is some cold-weather flamboyance. No matter how many different hikers come and go, the Danner Mountain Light as bought for £75 in the Danner factory store remains king. Even if the suede changed texture dramatically between left and right shoe. That Mr. Viberg himself lent Danner his Hiker design to make the Mountain is some old-fashioned industry buddydom too. 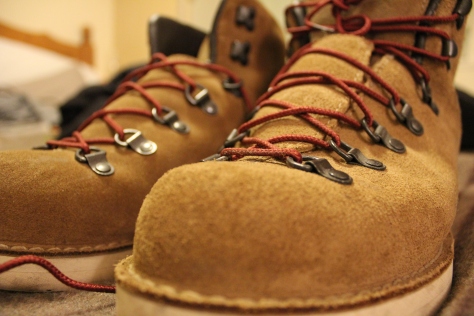 *On topic, if you want to see the increasingly ubiquitous merger of bearded man and expensive outerwear done correctly, check out ‘The Rig Out’s ’30th Century’ Man’ video online this Friday. It’s very good. Unless Glenn put in CGI robots and sorcerers during post-production. As with the above trailer, the soundtrack goes HARD.