For the most part, graffiti magazines aren’t very good at all. It’s all well and good documenting the temporary, but the internet does a damned good job of logging ups in realtime. Plus I’m embittered at the £10 a time I spent in Tower Records on luridly logo’d foreign language, sporadically published ‘zines that were just scanned photos. You can do a lot more with a magazine than much of what’s out there and it can be done without dry snitching or lapsing into street art tedium. I’m more interested as to what goes on in the minds of the weirdos addicted to damage and On the Go (which is also the name of “Toronto’s #1 Commuter Magazine”), 12oz Prophet and Life Sucks Die all delivered their own unique interpretation of the hard-core nature of the scene. Now the UK’s own Hurt You Bad has stepped into the arena, their “Graffiti magazine without graffiti in it” mission statement is bound to make traditionalists slate HYB with their own “art fag” slur, but it’s actually a great read. No drips, no posed entries through holes in fences…none of that. But there is plastic surgery on a pig’s head, a really good SMART Crew interview, a chat with a writer who’s inside for cocaine trafficking, lots of good photography, Horfe’s work, me talking about the Beastmaster poster and a really big explosion at the very end. There’s extremities and obsessions at the core and you should pick it up. The digital world is spilling onto paper in one big inky gaping yawn in an effort to prove that it’s “for real” but more often than not, a Richey Edwards style self-harm episode would be more engaging. HYB however, has an agenda, chapters with fancy titles (fancy titles require fancy coffee) and all sorts of grown up stuff that proves they’re about more than just blog slander. It’s worth supporting.

While you’re supporting Hurt You Bad and anything else that benefits from everyone’s favorite miserable subculture, spare a thought for those inside for it — OKER’S 24 month sentence means his family won’t have him around for Christmas. Pure Evil Gallery is selling these prints and pieces to fund his nearest and dearest over the coming months. Murmur don’t do the crime if you can’t do the time all you like but bear in mind that burglars get equivalent or lesser sentences and a man (already on a suspended jail term) who punched and paralysed a man in an unprovoked assault got 34 months. Punishment’s part of graffiti you need to accept — especially if you’re a grown up, but there’s better uses of cells than filling them with people with a pathological predilection for writing on stuff. Fairey deserves more substantial sentence for that piece of shit opposite Nike’s 1948 store in east London and whoever was involved in that godawful Microsoft mural that recently went up — from the PR company to the painters — should be punished to the fullest extent of the law. A crackdown on street art and on-the-spot fines for tourists standing in the middle of the road with iPhones held aloft taking snaps of street art should be implemented, with doors kicked in and devices confiscated for containing street art tour apps. 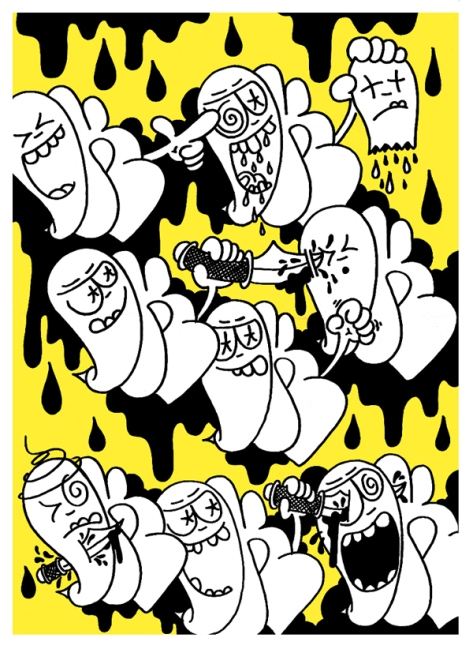 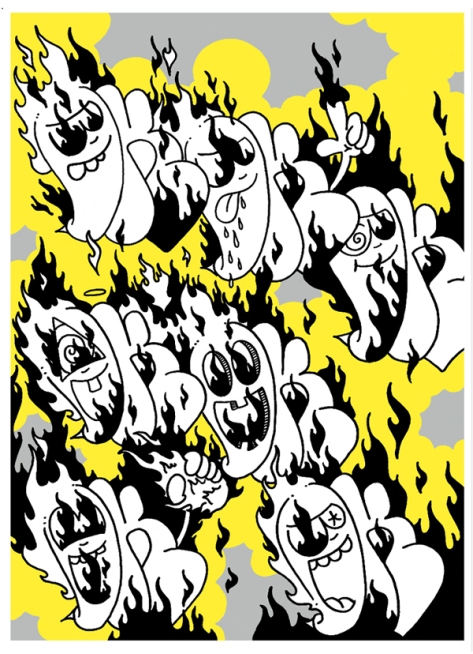 Thanks to my buddies at First We Feast (best new website of the year) put me onto the 2013 opening of a Shake Shack in Covent Garden. There’s room in my heart for that place’s concretes, burgers and dog biscuits in a London setting. Seeing as the NYC branches are hardly cheap, I’m assuming that the dollar to pound conversion won’t be as startling as say, Chipotle, when it arrived on these shores. Crinkle cut fries stay winning too. This and Balthazar (when brands are paying for breakfast) will make this tourist trap area worth the effort spent swearing at the living, grinning, faux chirpy living tunnel of flesh that is the gauntlet run of charity predators on exiting the train station.

There’s a new Larry Clark film out and you can watch it right now, because Larry and the studio system don’t get on (lest we forget, Clark ended up choking a man who was meant to bring Ken Park — never released in the UK — over here). Having read some reviews from the Rome screening a couple of weekends ago, I expected the usual distributor limbo, but we have access to it immediately. Marfa Girl has skateboarding, woozy amateur performances, topless teenagers, an awesome babbling bird, some sex scenes, an interesting soundtrack, a gratuitous female toilet sequence (Clark’s own kind of streaming), some restrained melodrama, guns, a cast of unknowns and some beautiful cinematography (from David Newbert). It’s curious that, given free rein to do as he pleases without industry interference, everyone’s favourite documenter of casual deviancy, doesn’t make something particularly explicit (well, by his own jazzy precedents) and instead focuses on spirituality and very small-town eccentricities. You can watch it for $5.99 (which lets you have access to it for 24 hours) right here as a stream. If you like Larry’s work (does anyone else think James Woods’ performance in Another Day in Paradise is a career high?), you need to watch it. If you don’t, it’s not going to convince you. I liked it. This NOWNESS interview with the Larry Clark is well worth watching too.

There’s too much good stuff out there to maintain focus at the moment. Even I want to get way from the WordPress backend and read this right now, but the voices in my head won’t let me until I’ve uploaded something. It was good to see Jerry and Michael Richards talking about that fateful heckling incident…by incident I mean massive outburst of racism. I never bought the joke-gone-wrong theory, despite my love of Kramer, but I’m inclined to believe he had a post ‘Seinfeld’ breakdown of some sort that manifested itself alongside some extra issues. 6 years of sadness on, I think he’s served his time and he cuts quite a miserable figure on ‘Comedians in Cars Getting Coffee’ — especially at the very end when Jerry talks to him about the career-killer. The other blast from the past in the latest episode (as seen on other installments too) is Jerry’s Nikes.

Funnily enough, Jerry’s swoosh obsession has been very good for my “career” and after Mr Josh Porter (formerly of NikeiD a few years back) told me that Seinfeld’s occasional appearances in the NYC iD space always involved him grabbing Shox and reportedly shrugging and saying, “I love the Shox” it’s no surprise to see him in the onetime rudeboys’ favourite technology. Seinfeld is still very much a Nike man. This entire episode feels like a bittersweet ‘Seinfeld’ epilogue – more so than the ‘Curb Your Enthusiasm’ arc that was a be-careful-what-you-wish-for for the show’s nostalgic fans. It’s a moment of catharsis and a one-man intervention for Richards that’s a long way from Richie Appel’s fictional one back in 1992. It’s worth giving the wire-haired eccentric points for at least conceding he fucked up, unlike Enoch-backing pseudo bluesman Eric Clapton.

Mr Nick Schonberger hooked me up with a copy of ‘Forever: The New Tattoo’ and it’s excellent. There seems to be a movement that doesn’t want to consider itself a movement within the trade of tattooing and this book does a great job of documenting some key practitioners who are vandalizing bodies with a skilled brutality that’s mesmerizing to look at. Tradition and free thinking, plus a certain unwillingness to participate in those TV shows and webisodes where a woman comes in to get a dolphin on her back to represent conquering some terrible malady makes pinning down some of these masters of the needle difficult, but Nick seems to be in that inner circle, asks some insightful questions and writes extremely well. Geometry, homemade styles, French cartoons and big, cool snakes and daggers for the fuck of it in the most visible places are all on display and the book’s design is beautiful. It’s not an encyclopedia, nor one of those ‘1001 Tattoos’ £6 from Fopp tomes — it’s an elegantly gnarly cross-section of the current mood. Guy Le Tatooer, Fergadelic, Duke Riley, Alex Binnie, Duncan X and Curly’s work is remarkable and in this format, paper does it justice. Go buy this and pick up the new ‘Sang Bleu’ while you’re at it – yeah, the new issue is £75, but you’re only going to spend twice that on a bad shirt that you forget to eBay and end up shifting for £60, so compared to that sartorial misfortune, ‘Sang Bleu’s a bit of a bargain. 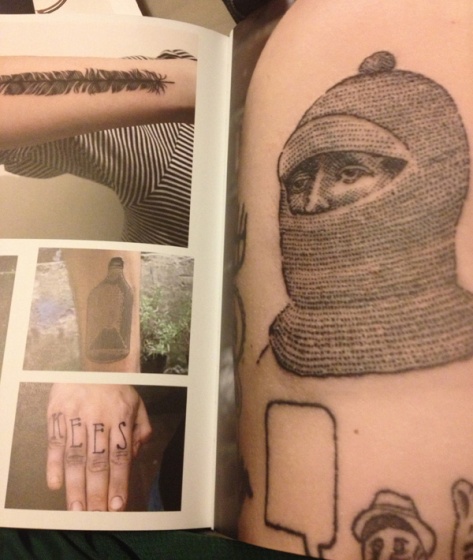 I sneaked a look at an unfinished copy of the new ‘Hurt You Bad’ magazine and stole this picture from Sofarok’s Instagram too. If the notion of a graffiti magazine without graffiti in it seems absurd, you can get your fix of train and wall damage from a swift Google search these days. You don’t need to pay £12 for 24 pages of scanned photos and excitable German text to get your fix and the HYB team’s output is strong. Crucially, you won’t notice the dearth of drippy tags or throw ups until after you finish reading it – that’s quite an achievement. Where a lot of publications lose their footing — despite some bold press release proclamations — is the lack of an editorial agenda, leading to a cluttered, scrappy pulped tree equivalent of (insert blog name here) that defeats the point. I don’t know when it’s coming out though, but you need to pick up #1 — it’s the best graffiti magazine (the new breed of beautifully designed books don’t count) I’ve browsed since ‘Life Sucks Die.’ And I really liked ‘Life Sucks Die.’

Y’OH Streetwear has made some serious moves this year by creating gear with just enough nostalgia for the older heads who long for the Iceberg and Moschino era that got kids dressing back in the day and plenty of prints to ride today’s wave for the youth who couldn’t care less what we think. It’s a potent mix and Kara keeps creating it. If you ever longed for one of those tees from a diffusion line that was just expensive enough to get peer props and distract from your cheap denim — maybe you lusted after a Guess Jeans design with the embroidered letters — Y’OH’s embroidered take on the excellent Y’OH Sport design drops next week. Everything looks better when it’s embroidered. Shit, even NAFF CO.54 and any other knockoff on cotton or nylon coach jacket fabric used embroidery as a distraction from their fugazi nature. Great stuff. 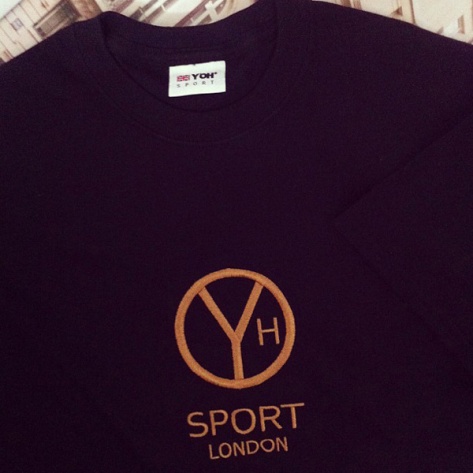