Farewell Tony Scott. Underappreciated and considered a maestro of the overstylised, his movies were always interesting. What’s wrong with an excess of style anyway? I never put a tape of any of his films into the VHS expecting ‘Kes.’ For matters of disclosure, I hate ‘Top Gun’ — it’s boring, hi-fiving rubbish and no better than ‘Iron Eagle’ or any of its sequels. I hate ‘Days of Thunder’ too. But there’s much more to pick from — a corrupt cop losing his fingers to Denzil’s angel of vengeance in ‘Man on Fire’ (incidentally, I’m also a fan of the messier 1987 movie of the same name too which Tony Scott was originally set to direct) , Bruce Willis making like Prodigy and rocking his assailant in the face and stabbing his brain with his nosebone in ‘The Last Boy Scout’ and the Drexl Spivey interrogation (Tarantino’s script but Scott gives it a final buff that makes it better) in ‘True Romance’ and the end of the slightly underrated ‘Revenge’ that’s typically glossy but packs an emotional punch (though it’s more effective if you’ve actually watched the movie). Then there’s 1983’s Bowie-tastic ‘The Hunger’ (above) with the gothiest opening scene ever. The new wave of bloodsuckers can’t compete with this vampiric new wave moment — the font, the lighting, Bowie, Peter Murphy, psycho monkeys, Catherine Deneuve in Yves Saint Laurent (and trust me, even if ‘The Hunger’ was the only thing Scott ever directed, for the impact the Sarandon and Deneuve love scene had on my pre-pubescent mind alone, I’d be mourning his passing) basically makes it the most black painted bedroom friendly 6-minutes of cinema ever. Bela Lugosi was dead, but this next breed of bloodsucker was a great deal more menacing. Ignore the usual bro fodder when it comes to celebrating Tony Scott’s life and there’s gems. Am I the only one who likes at least 50% of ‘Domino’ too? What’s that? I am? Okay then. Each to their own.

Tony Scott put Mickey Rourke on during his early to mid 2000s comeback trail, but I’m currently obsessing over his straight-to-video era, post ‘Wild Orchid’ and pre ‘Buffalo 66’. Rourke’s presence at any stage of his career is undeniable and this 1994 portrait by Michel Comte for ‘L’Uomo Vogue’ is amazing. The manliest of hand holding (check the dual watch wearing) and Mickey matching a Marlboro with adidas tracksuit bottoms and two-tone wingtips is a tremendous look. You need to be Rourke to make that unemployed look actually work for you though. He might dress a little Eastern-Europe theme pub now when he’s hitting Stringfellows, but there was a point when this guy couldn’t not look cool. (Image from Photographers’ Limited Editions)

For a short while I thought I dreamt up this photoshoot, but this 1992 ‘People’ article image of Phil Knight slam-dunking in Jordan Vs is every shade of awesome. Reluctant to get in the limelight, this picture is a rare super-animated publicity image of the Nike co-founder. Having read several accounts of Knight’s competitiveness on the court, that expression on his face is no surprise. 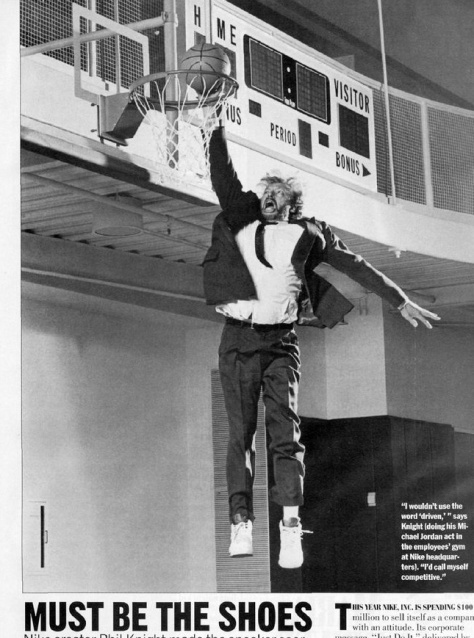 The downfall of many a product (sometimes an entire brand) is the fonts. Mr. Maxime Büchi is a mastermind when it comes to letterforms and with the new ‘Sang Bleu’ arriving shortly, he’s putting out some shirts with some fine typography without resorting to tattooing cliches. I need to transcribe an hour-long conversation with Maxime for another site at some point in the next few days. Gotta love that overachieving Swiss-born madman. In the meantime, go to SangBleu.com to see how you can get a tee. (Image swaggerjacked straight from the mxmttt Instagram account) 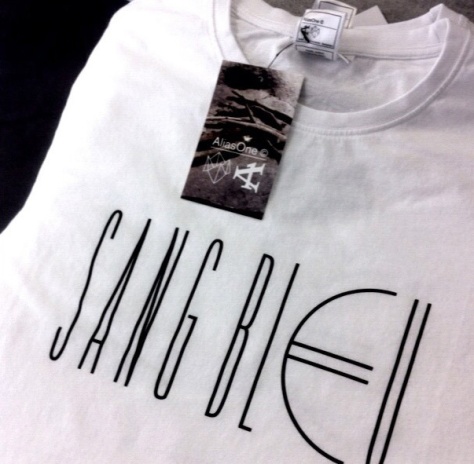 And via my friends in Las Vegas I just found out that Jim Jones’ Vampire Life brand and French Montana’s Coke Boys brand are exhibiting at the same time. Is streetwear beef going to make a return?