Hey, ironist whitey — don’t front, you know you’ve pretended to throw up a gang sign, Crip walk or done up the top button on a Pendleton and scowled at the mirror. Bet you’d shit yourself if you were in gang territory though — your blogwear wouldn’t stop from being treated like Marky Mark by locals. Still, our preoccupation with Los Angeles gang culture isn’t any more inexplicable than the mafia fascination that pervades popular culture (gotta love ‘Bangin’ in Little Rock’ with one of my favourite moments at 17:06), and any organisation operating outside society’s rules with its own rules and uniforms is going to fire imaginations. Ah yes, the uniforms.

Let’s be clear here, who’s selling the aforementioned Pendleton, Chucks, Carhartt, Dickies, Ben Davis, khakis and white tees to you — some lookbook clown with a side parting who you could put in a chokehold, or some real OGs? That pride in the quality basics is a striking aesthetic that’s had more impact on the current wave of simple, quality looks than is credited.

If we’re going to explore how a blog post like this comes about, it was entirely fuelled by the photo of Crip founder member Greg “Batman” Davis (check his website here) in swagger mode — I don’t understand enough to either condone or condemn Greg’s earlier lifestyle, but with his Charles Manson friendship plus dalliances with the Symbionese Liberation Army and Jim Jones he’s a fascinating figure — that I spotted at the MOCA ‘Art in the Streets’ show. The way a whole gang phenomenon was summarised in a couple of sentences as part of the exhibit was curious, but that high rolling image is a strong piece of criminal imagery, with Davis seemingly looking to document a moment of perceived invincibility fired my imagination.

What happened to Nemo Librizzi’s Bloods and Crips documentary ‘Lay Down Old Man’ from 2005 that got a single screening at Blacktronica and some film festivals before vanishing? It had plenty of footage of Davis reflecting over his past, but whereas ‘Bastards of the Party’ and Stacy Peralta’s ‘Crips & Bloods: Made in America’ are readily available, ‘Lay Down Old Man’ has never reached DVD.

That Crip talk made me think of the Glen E’ Friedman photo session from South Central Cartel’s 1994 LP ‘N Gatz We Truss’. It’s not the guns which grabbed my attention (seriously, what was the odds of ANOTHER group having a Havoc and Prodeje in?), it was the customised Ben Davis work shirts, including the Def Jam West variation that blew me away. I’ve even put it in mood boards, blissfully ignorant of the heavy metal in the foreground. What can I say? I’m stupid like that. That in turn had me pondering the mighty Ben Davis. Seeing as the blog logo (courtesy of Sofarok) is a Ben Davis tribute, I’ve never done the brand justice on this site.

All you really need is O.D. Wolfson’s 1995 interview with Benjamin Franklin Davis and Frank Davis from ‘Grand Royal’ #2 — that offers some excellent background on the brand and how it started. I’ve upped a scan of the page here, but there’s a few other interesting morsels that make for an interesting supplement to the answers Mr. Davis provides.

Beyond the handful of store photos, painted ads and newspaper promotions from the late 1940s and 1950s, it’s interesting that Davis mentions that while the shirt is a Ben Davis creation, their pants were based on a design that was an acquisition (the Ben Davis brand started in 1935) from the then defunct Neustradter Bros. and their ‘Boss of the Road’ line — the gorilla was a reaction to mascots like the ‘Boss of the Road’ bulldog. I found some of their old advertising (dating back to 1901), and it’s notable that the ‘Boss of the Road’ brand was bought and resurrected by Lee in the late 1930s with added Lee branding, but that familiar jowly pooch is still present.

Continuing Ben Davis’s link to other denim powerhouses, Ben’s grandfather Jacob W. Davis’s patent for his invention – the copper pocket rivet for jeans — filed on August 9, 1872 is available too. That started with duck pants before the transfer to denim. That patent was half-owned by a certain Levi Strauss, and it’s a hugely significant moment in denim evolution — Jacob worked with Levi by developing the manufacture of the resulting pants and he sold his interest in the patent to Levi Strauss in 1907, just before he passed away.

Ben Davis passed away on February 19, 2009 — a pioneer and inadvertent father of streetwear in many ways. But that’s a whole different story… 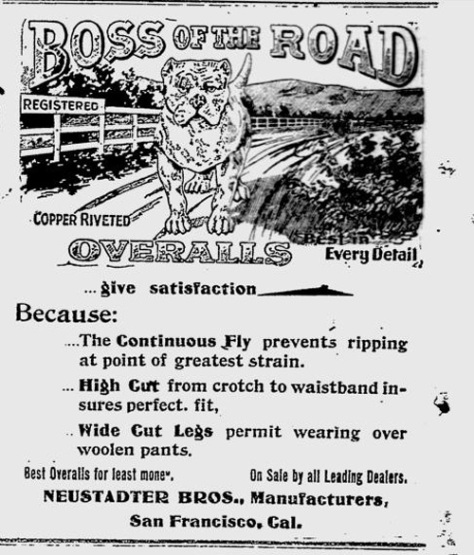 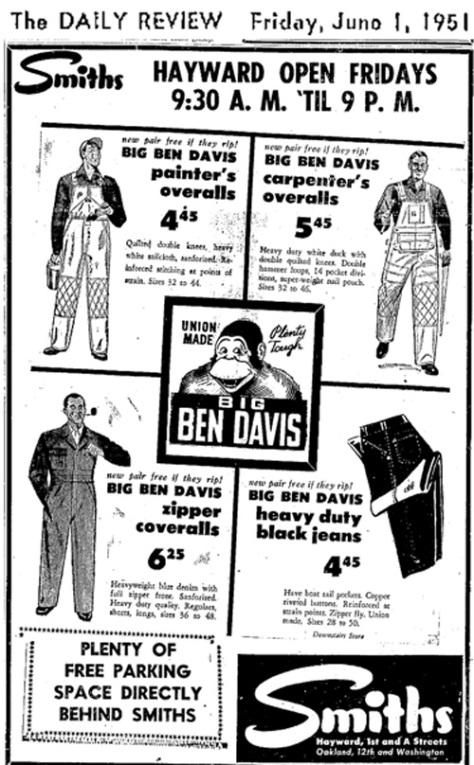 UK/Euro heads should tap up the good folks of www.theoriginalstore.co.uk for your Ben Davis needs.