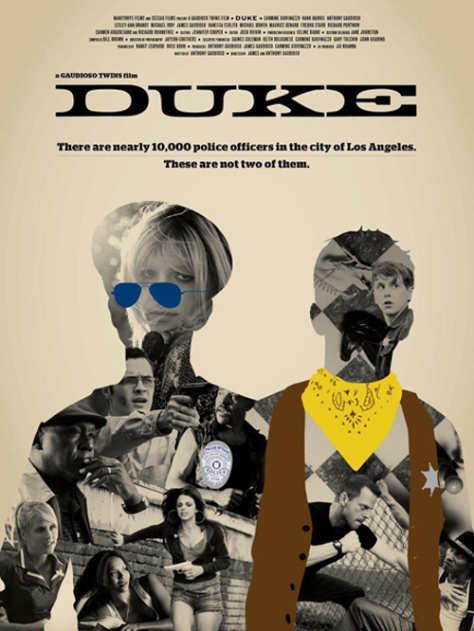 Everything’s a preview these days. We know what’s coming out years in advance, and in the age of Instagram, everyone’s a secret agent. No idea’s original and nothing’s particularly surprising. That doesn’t stop 2012 from shaping up to be an interesting year — ignore the Mayan killjoys predicting our collective demise, because there’s some good stuff on the horizon. Here’s some stuff I’m feeling that may or may not drop this year. Usually when I attempt these things, 25% is good, 25% turns out shitty and the other 50% never happens. That Herno Laminar sub-brand, taking Herno’s old world outerwear and giving it some Errolson-aided progression, the Jordan IV black/cement/grey colourway’s return, Sarah Silverman (who I’ve loved since she played Kramer’s girlfriend) naked onscreen in ‘Take This Waltz’, and maybe, just maybe, the much-touted Neville Brody and Kez Glozier magazine project, ‘THE NEW BRITISH’ are guaranteed to instigate buzz of one kind or another, but I decided to list 12 other impending things that could be good: 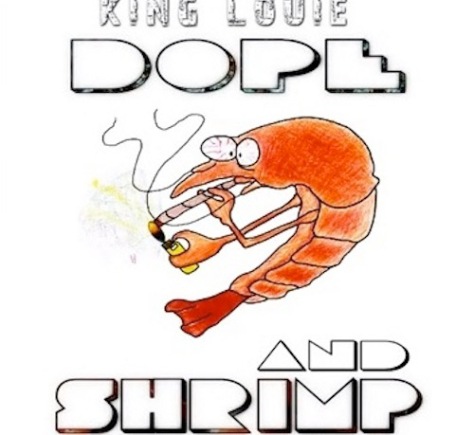 Blog favourites keep on blowing up, and Chicago’s King Louie’s mix of gangsterism, sleep-deprived wooziness and sci-fi production is cold enough go huge, after 5 years of local cultdom. Man Up Band Up Remix’ is still effective and LoKey’s production is strong. His ‘Work Something’ video appeared then vanished from YouTube early this week. The ‘Dope and Shrimp’ album drops this month, and it comes out on Lawless Inc, which is co-owned by former Kanye manager John Monopoly. The cover art, as premiered on Fake Shore Drive last summer unites both shrimp and dope in an almost Daniel Johnston or Seth Putnam way, really sold the project to me. 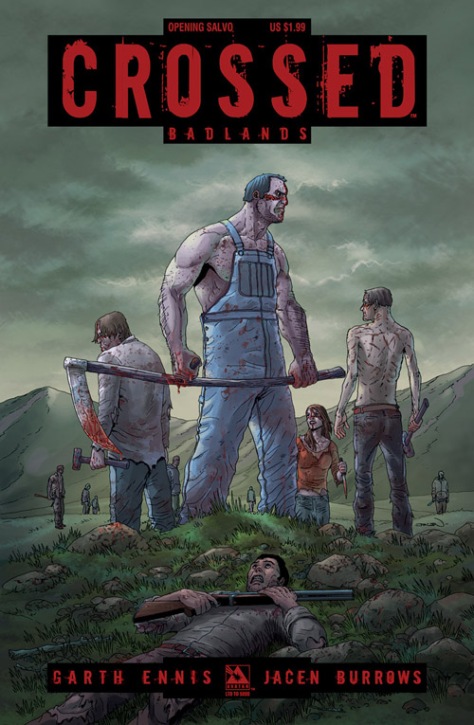 Comic books can be dull, but when some Garth Ennis is involved, ultraviolence and a certain sense of despair that he’s honed since the ‘Crisis’ days are guaranteed. This time he’s created an even bigger crisis – he first ‘Crossed’ series was a black-hearted complement to the zombie epidemic across popular media when it debuted in 2008. These infected are closer to the madness of Romero’s ‘The Crazies’ than Romero’s zombies, and they’re the kind to forcefully fornicate and bludgeon you with a human appendage rather than simply eating you alive. So is it murder porn for trenchcoated comic book guys? Not really — it occasionally offends, but Ennis is in control of an uncontrollable scenario. The follow-up series’ sans Ennis have become progressively worse, so his return for ‘Badlands’ is a welcome one. Issue #0 is fairly unremarkable, but my hopes are still high —it’s ‘The Walking Dead’ on angel dust, and while I’ve heard rumours, I doubt it can be tethered enough to become a TV series or film. The French method of promoting ‘Crossed’ is particularly impressive. I don’t think they’d get away with that in the UK.

The original T-Shirt Party was fun, with Stan Still dropping 52 shirts with accompanying videos over one year. I never thought he’d make the final stretch, but he did it. Mine shrunk fast, so I need more. Thankfully, in an act of masochism, he’s starting the project up again after a year out. There was something very British about the project, without resorting to the obvious, despite little diversions like the excellent Lisa Bonet design. Those raised on an era of yoof TV know what time it is. The last one started around February/March 2009, but I’m not 100% sure if it’s 52 designs again. I hope it is. And I hope there’s a Chris Eubank design in the mix this time. 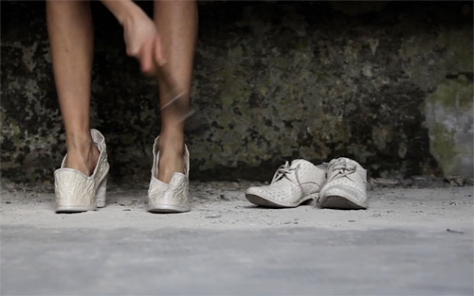 4. CAROL CHRISTIAN POE DOES SHOE FITTINGS WITH A HAMMER

I like the madness of Carol Christian Poell’s designs for men and women. Alas, I could never wear any of it, but for utter innovation, he can’t be stopped. Luxury fabrics, a you’ll-get-it-when-you-get-it approach to fashion in a seasonally regimented world and more ideas in a single garment than anyone else makes C.C.P. creations something special. At its most accessible, it’s like H.R. Giger meets Massimo Osti and this cryptic little video that appeared on the Carol Christian with a wedge heeled shoe that fits by being beaten with a hammer is some brutalist elegance — I hope it catches on and we have to beat the shit out of our footwear before we can leave the house in it. Custom high-end violence. 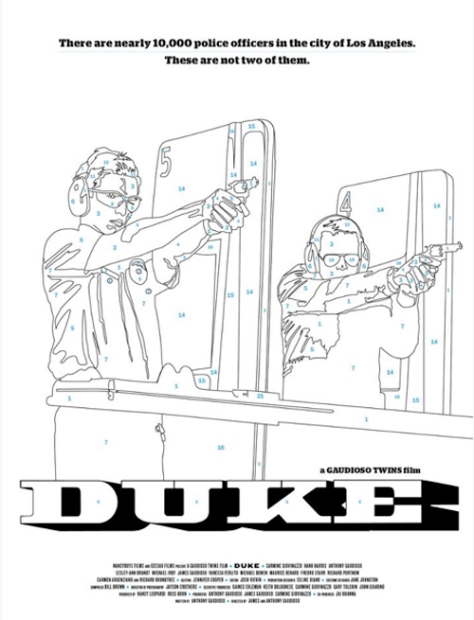 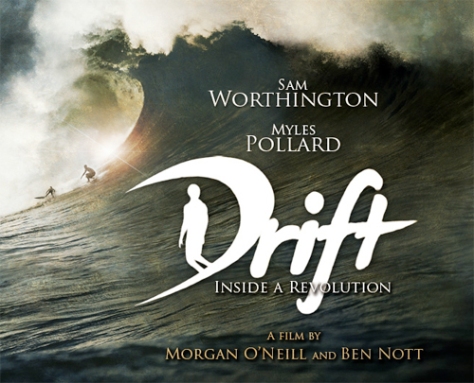 I know very little about ‘Drift’ or ‘Duke,’ but I know that the former — a true story of Jimmy and Andy Fisher becoming surf entrepreneurs in Australia circa. 1972 and getting mixed up with bikies and drug dealers and the latter — with two dysfunctional brothers cleaning up the streets with one pretending to be John Wayne and the other pretending to be a cop, sound like the kind of 1970’s films I’d fixate over as a kid. Surf action? Morally ambiguous vigilante heroes? At least the concepts are intriguing. ‘Drift’s marketing materials are significantly shittier in appearance than ‘Duke’s, but it’ll be interesting to see a trailer for either film some time soon. 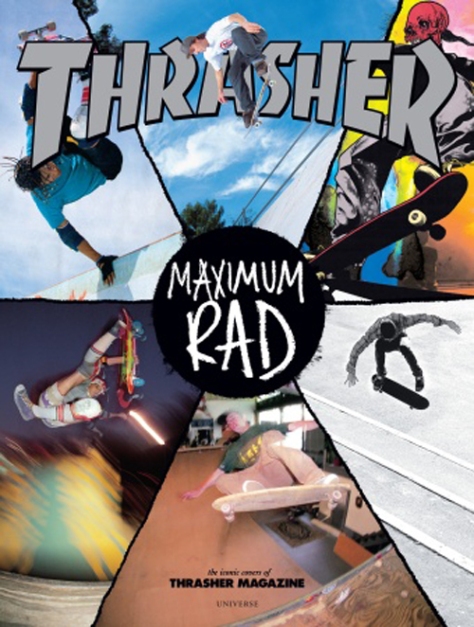 As a kid I had ‘Thrasher’ covers coating the wall, and now that the magazine’s 30 year anniversary is up, the ‘Thrasher: Maximum Rad: the Iconic Covers of Thrasher’ book on Universe that’s set for a February release gathers them all and adds anecdotes and information about each image. There’s been a few ‘Thrasher’ books before, but every cover in one place is an appealing proposition. A fair proportion of those images remain mind-boggling, and the amount of bones broken in imitating as part of the quest to get a cover one day must be in the billions. John Gibson’s May 1985 pipe cover stays amazing. 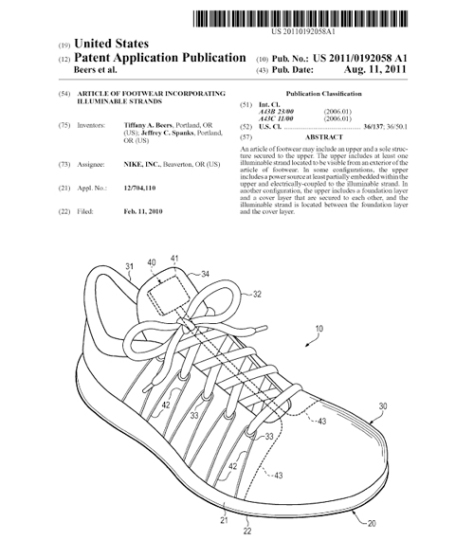 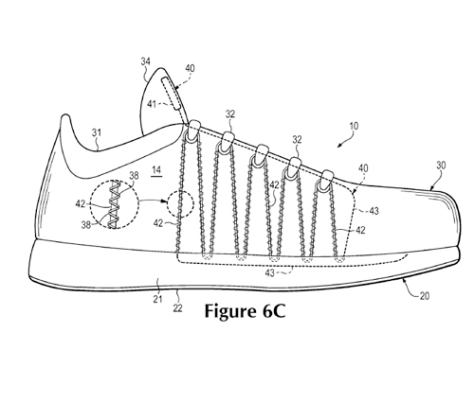 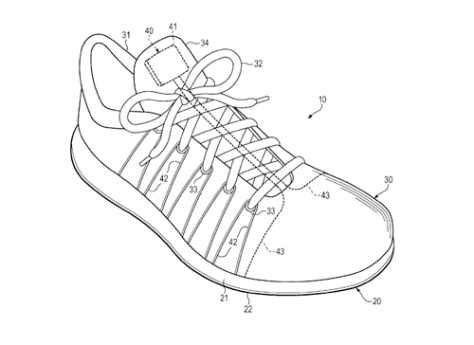 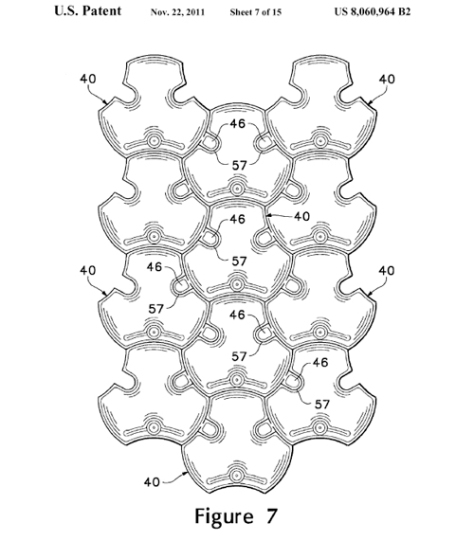 Trawling the patents, there’s a technology logged that I haven’t seen in action yet. As a kid I sketched weird light-up shoes in the back of exercise books, but the reality of the situation was those atrocious L.A. Gear Lights for kids. So I put that one on the backburner, because shoes that illuminate was more liable to look like the rope lights on the DJ booth at a relative’s wedding reception than something even remotely futuristic. Seeing the Air MAG with its charged lighting had me pondering as to whether a design for night running could carry a more subtle sense of illumination. “Article of Footwear Incorporating Illuminable Strands” is some sci-fi sounding footwear that seems to keep the light-up stuff looking Flywire-esque on those illustrations. And I don’t even know how a “Fluid-Filled Bladder for Footwear & Other Applications” works, but I’m into it. Will they ever come out? I have no idea.

Courtney Love is good for soundbites, but she’s especially good on a name dropping spree as shellylovelace on YouTube. I only clocked the quoted comment here, which somehow links Courtney, Martha Stewart, Jodorowsky and Yoko Ono while looking for images of Phil Spector’s khaki shirt, studded wristband, sunglasses and presumably, a concealed firearm outfit in the studio with John Lennon. Watching John and Yoko on the Dick Cavett show from a link on the Featured Videos section, I came across this mini-anecdotal gem. I think there’s probably more to come, and the most recent made unfavourable comparisons between Nickelback’s lead singer and Dave Grohl. Courtney and the internet is a winning combination. 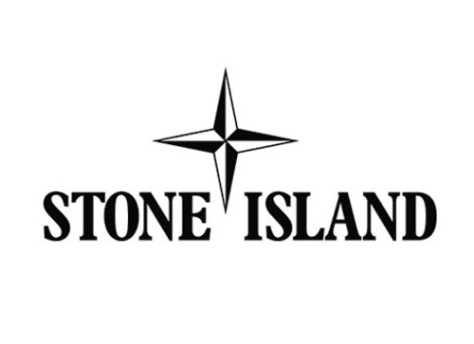 Some brands are so progressive that even when they’re being retrospective, they’re still far ahead of the rest. It’s Stone Island’s 30th birthday this year and hopefully that means anniversary releases old and new, plus that rumoured book project. Some brand book projects are a crushing letdown on their release, stylised, but offering little new information or the product archive listings that the geeks want. Stone Island could put out something on the ‘DPM – Disruptive Pattern Material’ level that fellow obsessive Hardy Blechman created. Hopefully they will. Let’s hope the presentation is as innovative as the content. 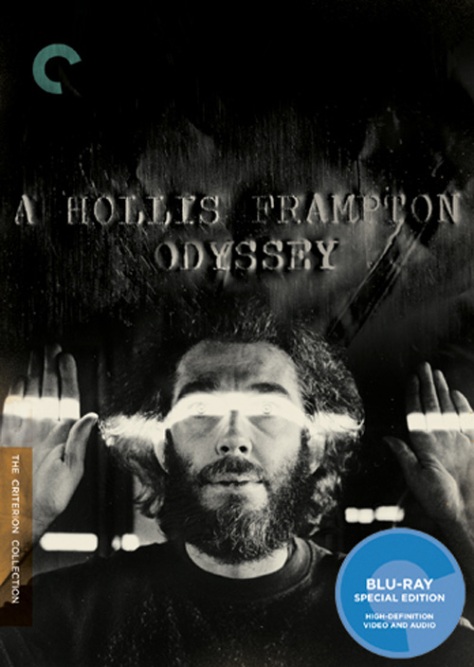 Hollis Frampton, deep thinker, photographer, digital experimenter and filmmaker always struck me as a solemn kind of chap, but I’ve always found his work abstract but fairly accessible. While his work could easily have fallen into the frivolous pitfalls that make so many artists slip into self-parody, his work seems stuctured with reasonings that, in the mind of Frampton, seem utterly reasonable. And he was eloquent enough to make me feel dumb for dismissing a lemon artfully shot in the shadows. The slow burning of (nostalgia) is oddly engrossing and I love the ‘Screening Room’ footage with him (“Without wanting at least to sound pretentious…”) chatting very, very seriously at a time when people could smoke in television studios. Criterion have compiled and restored his body of work into high-definition digital, and are putting it out in April. 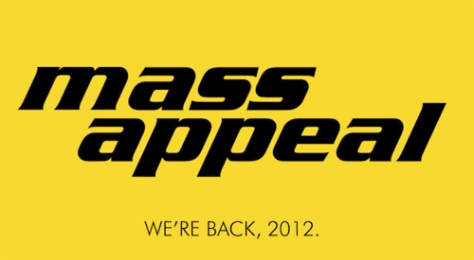 11. THE RETURN OF MASS APPEAL

Having spent a substantial amount of my life hunting down issues of ‘Mass Appeal’ from Tower Records (R.I.P.) during London, Edinburgh and Birmingham trips, and it being one of the few graf publications that warranted more than a cursory read for a toy like me, I was sad to see it disappear in 2008, after becoming increasingly elusive, but still being extremely readable (one of the last issues I read had a good piece on the Decepticons and another fine R.A. the Rugged Man movie feature). Before the ailing days and before publisher Patrick Elasik tragically passed, ‘Mass Appeal’ was my pre-blog information carrier, and offered some of the best cover design of any magazine. The homie Russ Bengston’s shoe column was excellent too. Four years on, the website indicates it’s coming back. Good. There’s unfinished business to attend to and room in the market for ‘Mass Appeal’ to step back into the arena. 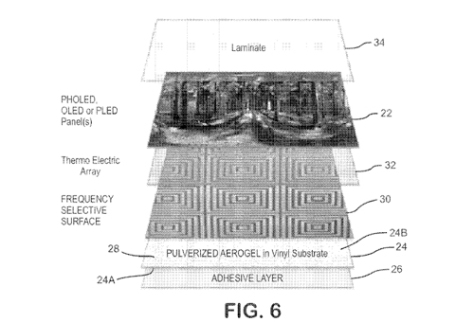 I’m not a man of science by any means, but reading this month’s ‘Popular Science’ there was some mind-boggling talk about camouflage that can be customised to your surroundings, with the material containing a display that can be made to adjust to your location for accurate concealment, as well as thermal and radar suppression capabilities for some state-of-the-art sneaking. That sounds like ‘Predator’ in real-life, right?

Special Operation Apps are already developing applications, like CamoScience that can work with site-specific Photographic Camouflage. According to the blurb, the CamoScience app “uses augmented reality to test and create images in real time in the field.” Snap your locale on your iPhone and make it a “wallpaper” on what you’re wearing, or the vehicle you’re in? That sounds outlandish, but K. Dominic Cincotti’s patent contains a diagram of a six-layer “Multispectral Adaptive” technology that looks complicated. This, and quick change deception camo concepts make those battle pattern jackets in your wardrobe look pedestrian.