Fig. 4A. The label of the Champion Reverse Weave T-shirt

Stung by allegations of being a “sneakerhead” and a fashion blogger—both things I’d rather not be, I’m inclined to blog about nothing but Italian cannibal films for the next few months. But there’s actually better sites out there covering ‘Jungle Holocaust’ and other flicks where Me Me Lai does her thing. Additionally, I’ll be damned if these tees aren’t worth an unnervingly close look. Just when I thought I’d written my last entry pertaining to Champion apparel, they pulled me back in. Even more predictably, I’m blogging about a new acquisition. This is the kind of behaviour that makes me want to punch myself. Heritage preoccupation is getting stale, but those obsessives in the Far East who birthed this kind of lunacy keep unveiling things that get me excited. Like replicas of old Champion apparel.

Lest any allegations of being stuck in the past when it comes to Champion, I once got unnecessarily excited here about the purist-baiting big ‘C’ crewneck, and Champion products readily available in the UK and US are often undone by dimensions so odd, that only Brock Lesnar could fill out a sweatshirt. The tees are very, very poor on the whole. I’m prone to wearing the $7 jersey tee, but it’s an odd size. Long. Boxy. Big neck. Pretty piss-poor. I know what I’m getting with those neutral embroidered chest ‘C’s too. But the general fetish is for that little white/blue/red attached ‘C’ on the sleeve of a sweat or tee. And the quality there is a fucking minefield. As a rule of thumb, I don’t mess with anything that isn’t Japanese or US-made, bearing that branding. Glued-on ‘C’s are the worst.

My good friend Grace Ladoja went to Tokyo to do something with Carri of Cassetteplaya fame. Because I’m rude, I didn’t ask her what, but I’m guessing it was Swatch related. I don’t get to go to Tokyo very much, and I’m too mean to shell out my cash to fly there. Thus, I miss out on the pieces that shipping/taxes and Rakuten’s occasionally confusing nature block. I’ve said it here, and I’ll say it again. Japan still has things that slip under the radar sat on shelves there. Not even the all seeing blogsphere picks up on some good stuff.

But the jewel is still their branch of Oshman’s, a US retailer that was, like Tower, ailing in the States, yet somehow happily exists in Tokyo. Curious that Tokyo’s Tower and Oshman’s might be my favourite stores in the world, and they’re both imports, bolstered by some local obsessiveness. As an extra factoid, Oshman’s bought Abercrombie & Fitch in the late ’70s after they went bankrupt. It’s got some of the best Champion pieces on the planet, and the prices, even when the Yen’s got the Pound in a headlock aren’t too ludicrous. Grace brought me back a couple of tees I requested.

I never thought a t-shirt from Champion could tussle with some personal favourites, but I’ll say it right now— provided you can take the weight (RIP Guru), their Heavyweight Jersey MADE IN USA marl grey tee is the best grey shirt on the market. It weighs almost twice as much as a bog standard polyester/cotton mix one. You wouldn’t wear this as underwear unless you were looking for a heat stroke. But hey, different strokes for different folks. Why is it good? The marl patterning is more dramatic, the inside seems brushed for a softer feel than the outer, there’s at least some stitching visible beneath the ‘C’ (thicker and slightly more chubby than the pointier version on current Mexican-assembled gear) to stop it dropping off in a hot wash, and the neck is a laid-on ringer style one. It’s neither too tight, nor is it loose around the neck either. Being Asia-only, XL is an L equivalent, and it’s surprisingly non-boxy, with a relatively slim cut, but arms that aren’t up by your shoulder. ’50s style, but with some early ’70s style branding, it’s a thing of beauty.

It was actually Mr. Michael Kopelman, wearing a navy version of the same shirt, who put me onto the MADE IN USA variant. That ringer style neck is also present on Costa Rican assembled shirts, often used by Japanse streetwear brands in the late ’90s and early ’00s but they were wiiiide. And the fit was, like current sweats, Herculean.

Then there’s the other acquisition. What works for a sweat doesn’t necessarily work for a shirt. Take loopwheeled tees? I’ve got a couple. Overpriced, shrunk after a wash and the lesson was learnt. Actually it took a couple of disappointments to truly learn my lesson. But I hadn’t seen a Reverse Wave t-shirt before. Is it even an original Champion item, or some showboating using the Reverse Weave manufacture process? Until now. Presumably made in Japan (it’s unclear), this black shirt doesn’t have some of the finesse of the grey MADE IN USA— the neck, the stitching beneath the branding, but it is, in its own weird way, a triumph.

Almost…very, very nearly, a short-sleeved sweat in weight and curious details like ribbed side panel (on a tee?), you can see some interesting patterning in the cotton, and again, the underside is slightly softer, like half-arse fleece effect. It’s strange, but pretty appealing. The fit is borderline smedium, even in XL, but it fits nonetheless, and if “fitted” tees are your thing, that side panel gives it an effective look. I’m fairly certain it’s made in Asia because it isn’t theatrically boxy, and the neck is snug rather than hanging off the shoulders. I’d heard about the mysterious Reverse Weave tee in passing and by jpeg, but now I’ve got it in my hands, it’s another win for Champion Japan, while other regions seem to squander the heritage more than a little.

And as an unrelated finale, go check out the Palace feature at TMI. Not just because I wrote the intro, but because Lev is the greatest of all brand frontmen. 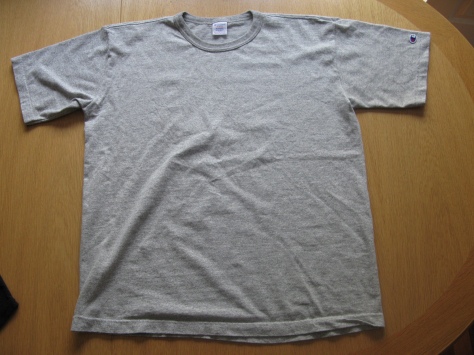 Fig. 1B. Made In USA grey marl T-shirt 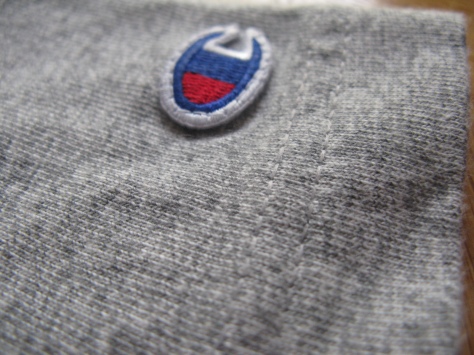 Fig. 1E. Made In USA grey marl T-shirt, under the branding 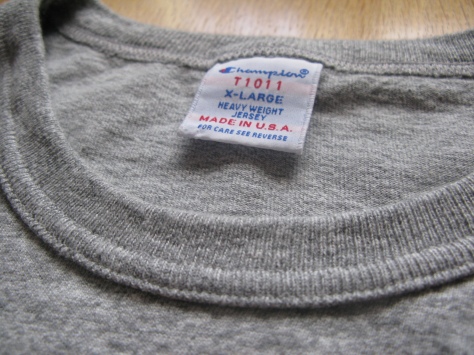 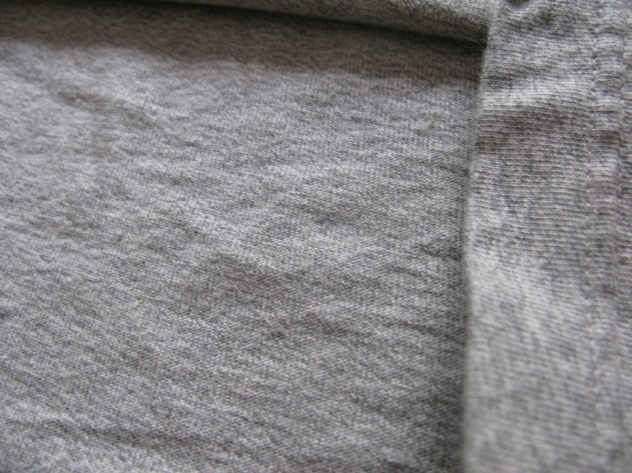 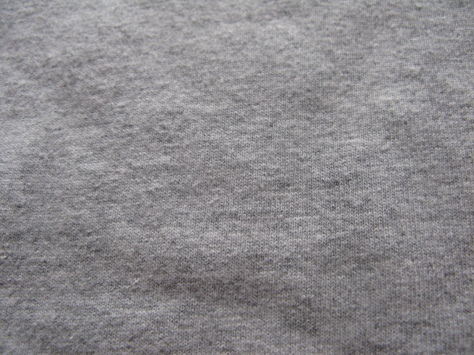 Fig. 2A. For reference, the material on a shitty 10% polyester mix Champion T-shirt

Fig. 2B . For reference, the neck on a shitty 10% polyester mix Champion T-shirt

Fig. 2C. For reference, the branding on a shitty 10% polyester mix Champion T-shirt 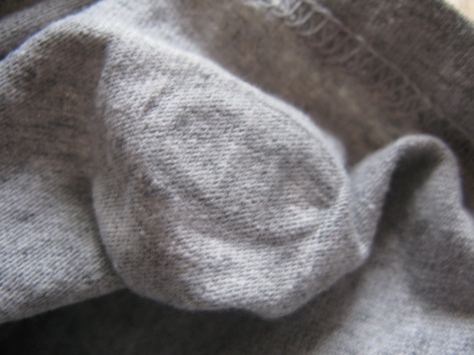 Fig. 2D. For reference, beneath the branding on a shitty 10% polyester mix Champion T-shirt

Fig. 3A. For reference, a ringer neck on a crappy Champion T-shirt

Fig. 4B. The side panel on the Reverse Weave T-shirt

Fig. 4C. The branding on the Reverse Weave T-shirt

Fig. 4D. The material on the Reverse Weave T-shirt