I’m late to this one and I only ran into it trying to get hold of a copy of Ice-T Shot Me in the Face (if anybody has a copy of that book for sale, holler). I’ve long railed against lame shoe-dude apparel (bar Stüssy AM95, Dead Stock and OG CT tees) and the misconception that being into trainers is necessarily connected to style nowadays, but this 2007 image by the aforementioned book’s Montreal-based publisher Paul Labonté called Rubber Bands and a Shoebox (which, as part of a 2008 exhibition, probably isn’t a reference to this track by Ya Boy, who completely confused me by changing his name recently) is a Tumblr classic (which can be summoned by typing in cash and shoebox on Google Images) that benefits from filling a box that could contain some obscure AF1 His from 1992 or some Raids with stacks rather than some new packaging. Paul Labonté’s work is something I’ve been a fan of for a while now (as Paul 107, he wrote 2003’s excellent All City: the Book About Taking Space and he directed the video to Azelia Banks 212 too, plus this Black Atlass video) and the photo has been put on a long-sleeve t-shirt from Desfois/SOMETIMES that just started shipping. You can also grab the 2010 Photographs Inspired by the Rap Music That Once Inspired Me book from here and an enamel badge made with fellow Montreal man, JJJJound’s Justin R. Saunders, bearing the stuffed box image. Very well executed.

On the subject of graffiti and beautiful presentation, burning down the house, Norman Behrendt’s study of Berlin writers, looks incredible, studying the participants, the process and the spaces. That camo-like U-bahn seat pattern cover is incredible. 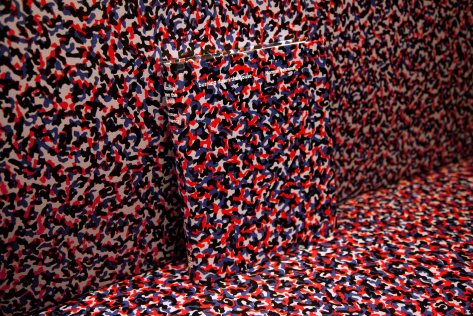