I have a fascination with really bad people. I mean really bad people. I don’t want to ever be suspected of a crime, in case the fascination is misread in that, “I always knew there was something strange about that one…” manner, but this isn’t one of those group hug kinds of blogs either. There’s something about Clarence Starkweather and Charles Schmid that exudes a macabre sense of cool. That could be down to Treat Williams’ portrayal of Arnold Friend in 1986’s ‘Smooth Talk’ (based on Schmid) and Martin Sheen’s portrayal of Kit in 1973’s ‘Badlands’ (based on Starkweather). There’s actually another, less effective, thinly veiled Schmidt flick—1994’s ‘Dead Beat.’

It’s all bloodshed, senseless behaviour, brooding, denim and quiffs. I can’t get on with Ted Bundy’s clean-cut, boy next door gone batshit look. I want to see freakish narcissism. Starkweather’s spree-killing antics are built on a certain sense of alienation, but Schmid was just downright strange, operating as a serial killer in the 1960s and attracting some insecure and—on occasion—equally obsessive women like moths to a flame (hence his “Pied Piper of Tucson” nickname). His choice of attire and physical embellishments is downright brilliant —boots with beer cans planted to make him seem taller, white lipstick, dyed hair and a beauty mark made of putty and grease, all to conceal the fact he was very short indeed. One of his “looks” prior to arrest was a bandage over his nose (like Andy Robinson’s Scorpio in ‘Dirty Harry’ post-paid beating, but minus the web-friendly cardigan and denim shirt combo) to pretend he’d had his nose broken…now that’s a look. 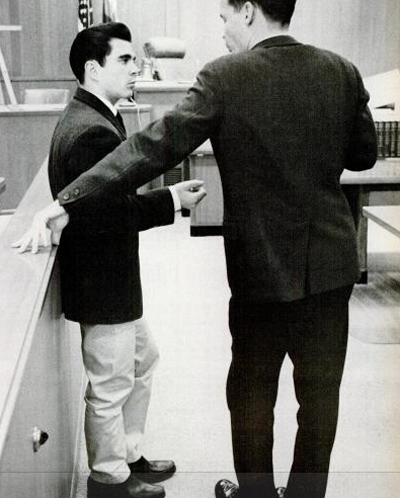 Charles knew when to pare it down

Wealthy adoptive parents and athletic prowess evidently didn’t stop that insecurity, so he transformed himself into some kind of malevolent Elvis character who seemed curiously out-of-time, yet unique in that staid small town setting. Going on to murder three women (as possibly a fourth person, this time a male), he missed out on the death penalty but LIFE covered his trial in a superior fashion. When Schmid was taking a stand, he appeared to make an effort, albeit an effort free of his homemade prosthetics, but his arrest shot captures that near-mythical spot and those stacked boots. Pictured after being recaptured post-prison escape, he still looks odd and his peculiar swagger reportedly continued until some fellow prisoners decided to stab him twenty times in the face and chest.

Payback’s a bitch and that’s where the Schmid story ends, but that same detached, braggadocios approach to homicide would be echoed in the 1986 film ‘River’s Edge’ based on the Marcy Renee Conrad case. That killer—Anthony Jacques Broussard—lacked Schmid’s unique sense of strange. 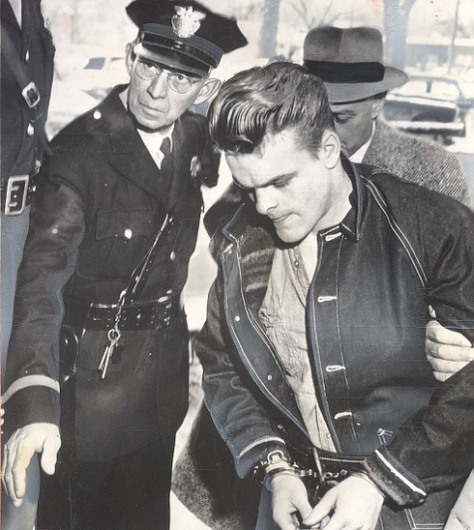 I am, as the blog post I enthusiastically bashed out after Travis the chimp went buckwild may have indicated, a ghoul. I’ve been a ghoul since I was a child. In fact, this post only came about thanks to a tasteless combination of the recent YouTube leak of UK funnyman legend Tommy Cooper’s onstage death – a playground legend the day after in 1984, and last week’s US face transplant revelations. Those two unpleasantries brought one name back from the recesses of my grey matter – Mr James Vance.
END_OF_DOCUMENT_TOKEN_TO_BE_REPLACED