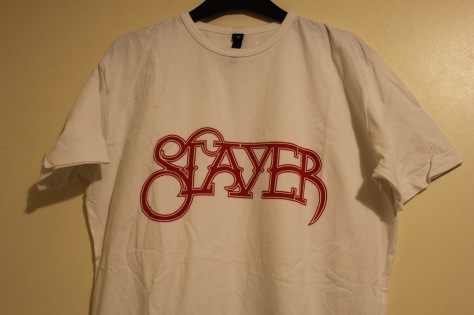 “The corporations lead the trends. When did street fashion become all about sneakers? What is that about? Who the fuck cares what hip hop wanker has started what baggy arsed sweatshirt and jean brand? Unfortunately it would appear that many people do care. And so the trends are set.” Russell Waterman, ‘Aspekt Ratio’ #1, 2007

I grew up in a household where much of the music was confined to a small rack of vinyl in the lounge. As a toddler it seemed like an infinite collection of music, but my dad’s record collection wasn’t particularly extensive. It was however, eclectic. I was preoccupied with the covers of the Leadbelly 4LP retrospective, the lettering on Paul Simon’s ‘One Trick Pony’, the back of Herbie Hancock’s ‘Sunlight’, Third World’s ‘Journey to Addis’ and bizarrely, both my brother and I loved the Pointer Sisters 12″ coloured vinyl that contained some label paper in the translucent red due to manufacturing error.

Best of all, there was the Santana font — fantasy realist Robert Venosa’s masterpiece that accompanies Mati Klarwein’s painting on the cover of 1970’s ‘Abraxus.’ Coincidentally my friend Jonathan would encourage me to gawp at the cover of Santana’s self-titled debut to see the faces in the lion like some kind of child hippie. Yet we never bothered playing the actual music. In fact, when I did finally listen to ‘Inner Secrets’ it bored me. My dad told me that his Santana collection arose as a result of a casual mention to my uncle that he liked a solitary Santana song. The result? Carlos for birthdays and Christmas. He wasn’t actually a fan.

But what a logo it was.

As a result I’ve been drawn to any reference to the font, and it transpired that three of my favourite brands had a go at parodying it. I just finished a project pertaining to homages and it meant I could dig out one of my favourite t-shirt designs ever — Silas’s Slayer/Silas, which I believe dates back to 2003 (though for a long time, I believed this design was a Holmes release too). Silas’s knitwear, simple sweats, Black Sabbath themed creations and ’80s disco meets punk meets hip-hop collections were great, but this one was just pitch perfect, with the noodling fusion sound of Santana at odds with the speed of Slayer’s sonics. Of course, there were parallels in fiddliness (as any ‘Guitar Hero’ veteran can tell you), but it just felt like a joke told perfectly. The ultimate deadpan delivery. Seeing as there’s no set font collection beyond S, A, N or T, there’s an appropriate amount of improvisation and riffing on behalf of the designer, resulting in that jagged, Obituary-esque thrash metal tail on the ‘R’ ro maintain symmetry.

While I believe this is the best version of the Venosa design, solely because it’s so wrong that it becomes utterly right, Holmes and Supreme deserve shouts too. Holmes was an early fascination for me, back when Slam City and Bond were must-visits on any London pilgrimage. Holmes was the proto-Silas in its early ’90s irreverence, with some sources citing the name as a John Holmes reference, long before ‘Boogie Nights’ — Russell Waterman, Sofia Prantera and several other local creatives generated some forgotten classics under this Slam City owned brand. Their Santana font ‘Satan’ (circa 1994? The picture here is borrowed from my buddies at Goodhood) was one of them. That switched the letters around smartly, and with Silas (hence the character of Silas Holmes) being a sequel of sorts to Holmes, the Slayer tee is like a sophisticated follow-up to that cult favourite from a golden age of pre-Google Image Search homage.

Between both tees, props are due to the Supreme Santana logo shirt, art directed by SSUR, designed by Kevin Lyons and released in 2000. That shirt represents the year when the internet sent hordes to the nation’s capitals in search of expensive toys, elusive Prestos and BAPE. So why dredge up these past glories? Because the current glut of 1:1 replica attempts lack the wit to ever be this memorable and it’s always worth reinforcing just how important Holmes and Silas were.