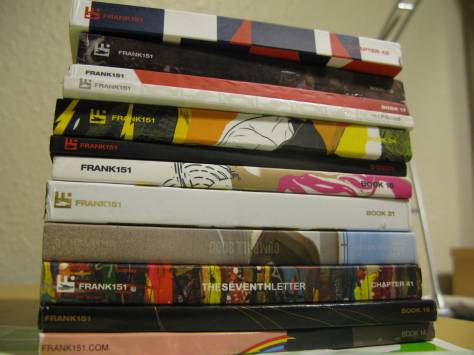 I don’t want this to be one of those blogs where the curator merrily hurls every piece of freebie tat hurled their way into a post, or makes a limp promise to a PR that “coverage” to a handful of readers and friends should warrant a freebie. Nobody needs to be exposed to the work of a lame blogger like that. But you probably know that I like magazines, and my respect for New York’s (formerly ATL’s) FRANK151 has cropped up here time and time before. Back when I posted an ill-fated list of magazines last month I even noted that this publication not making the top ten was something of a bozo move.

I first grabbed a FRANK151 as part of a package from an online rap retailer based on the same city as team FRANK (Sandbox? All I recall is being made to “fax” my Mastercard via an antiquated scanner before they’d treat me as anything more than a criminal before waiting more than a month to grab my vinyl. While the shipping by weight was no joke, the freebies were what made it a superior E-spot. Promo CDs, stickers, XXL tees, hastily signed CD booklets, white labels and occasionally…very occasionally, magazines.

A decent publication called ‘Mugshot’ turned up in a heavily sealed mass of cardboard, but it was FRANK151 that fired my imagination. It seemed utterly self-indulgent and totally focused on specific matters. I can’t even recall the chapter that proved a gateway drug, but it wasn’t until I grabbed a copy of 14 circa 2003 (with SSUR at the helm) that I truly grasped the guest-editorial nature of this project. My experiences with it in London have been fleeting. Beyond DPMHI’s heyday, I’ve never grabbed it in the same location more than once. It seems to deliberately elude me.

While you’re out trying to get your print project off the ground expecting me to high-five you just for picking pulped paper over pixels, whether it’s physical or not, garbage is garbage is garbage. FRANK151 rarely lets me down. It feeds my enquiring mind. I’ve broken out copies copped overseas and opened them back in the UK to reveal French and Spanish language editions. But I’m not mad. I stacked and saved those too.

Some editions have not been entirely themed on subjects I’m barely interested in, but they’ve proved educational regardless. You can’t go and demand your money back either, because it’s free, even if some stores keep ’em so far into the shelves that they’re practically daring you to reach over, look them in the eye, take a copy and wander out without buying a damned thing. Collated, I may well have spent enough time feigning interest in hanging racks of heavily marked-up cotton just to pick my moment to grab a copy and leave to watch Leone’s ‘One Upon a Time in America’ in its entirety again, even if it’s just the butchered VHS version from the ’80s and ’90s. That’s a lot of time spent lurking.

The book’s book-size defies freebie disposability and smuggles itself into lofty company with the books I pretend to read on my book shelf. It’s a survivor in that regard. Somehow I feel the urge to collate them and leave them be while less diminutive perfect-bound magazines in my living space get pulped. I spent a long, long time hunting down the Soul Assassins chapter, only for Estevan Oriol to kindly give me a copy recently, but not having the ALIFE, No Mas and recent Seventh Letter crew editions was eating at me. Until FRANK151’s Managing Editor Adam Pasulka clocked my rambling magazine entry, showed forgiveness for my oversight and sent me a “care package” of 13 FRANKs. It made it from the USA in a matter of days as well, unlike the lengthy vinyl limbo the likes for Sandbox and Hiphopsite used to leave me in.

Chapter 42 is the Cuba edition. For the Mellow Man Ace article and Michael Halsband’s account of Hunter S. Thompson running wild in the heat alone, you need it in your life. Cheers Adam. 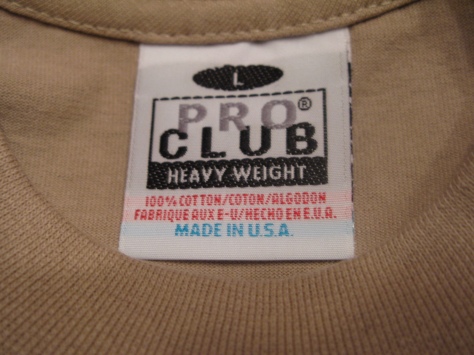 The quest for the perfect plain tee continues. It’s a quest that’s doomed from the start. Some are too thin…others feel constrictively thick (as a young ‘un, a Karl Kani shirt was purchased that could literally stand, phantom-like, if positioned correctly) – the expensive repro brands for a whitey are out the budget. Fil Menange make cotton-spun works of art, but still, art that’s going to end up with ‘pits like the Turin Shroud after a single summer in rotation, and all the Mitchum Smart & Solid in the world can’t save them. No luck finding treats like deadstock Oneitas with reinforced collars. Since this piece was upped, there’s been at least 4 voyages to the States, and pickings have been slim. Quality and quantity are the key factors. Naturally, fit is fairly important too.

As every bellend deems themselves enough of a tastemaker to air their dull fashion picks openly, it’s nice to champion something that appears to be legacy-free. Made in the USA but defiantly no-frills. In 2001, when Uniqlo made its first appearance on these shores it was pitched as the tee spot. All colours, low, low prices. a crewnecked spectrum. That seems to have fizzled out in favour of plastic packaging and prints, plus those fits aren’t what they used to be. Just as there’s denim-specific stores, how about a t-shirt retailer in the same vein? All brands, all plain – no logos. Japanese, US , UK and Portugese efforts…all colours, from slimfit to knee length, XS to XXXXXXXXL. Who doesn’t like a crispy tee on their back? Hanes Beefy has been the pick in recent years, but they get boxy fast – if you’re paying some ludicrous markup on them as imports, they’re far from perfect. If you pick a colour it fades after 2 washes too. Time for the ProClub Heavy Weight.

Pre-shrunk, meaning they keep their shape without becoming belly tops after a handful of spin cycles, and clocking in at 6.5oz where Beefy manages 6.1oz, ProClub’s not some heritage line. That logo is ugly, but it’s still one hell of a shirt. Luxe-T make a heavy shirt that’s soft too if you’re in the market for something more sub-sub-sub-substantial. Is there much of a ‘Club backstory? Not really. The site doesn’t reveal a lot about the brand other than their ‘Comfort & Style’ mantra, and apparently they’re California’s bestselling plain tee.

The ProClub Heavy Weight isn’t too long and is loose enough without compromising the dignity of anyone over the age of 20 – their Tall Tee is popular too, spitting in the eye of the new generation of moody sartorially focused folks. If you’re looking for an undershirt, fall back – the Heavy Weight will just make you look like you’re gaining pounds, but for external wear, they’re a strong hot weather pick – not heavy enough to prove constrictive. The downside is you’ll need to bulk bay from the ‘Bay to grab some beyond the USA. The pick of 20 colours is a positive though. Hanes’s bruiser is being put on hiatus in favour of these bad boys. The anti-heritage movement is in full motherfucking effect.

And some recent holiday snaps on the homie Maxime’s Sang Bleu blog of the visit to the SA headquarters just off LA’s Skidrow. For a couple of Euro left coast rap disciples it felt like a pilgrimage. Too much good stuff. Go check the site.