Given the pandemonium around the latest Supreme season’s offerings, it seems like a good time to look at some lesser-discussed pieces on the brand. The trouble with the internet is that most of the folks who were first seem to have vanished, taken down their sites or simply left behind by their early 2000s lack of search engine savvy. Sadly, it seems that Nikolai’s Rift Trooper site (one of the key inspirations for this blog) has gone after he stopped updating at the close of 2009, but thanks to the wonders of web.archive.org, you can read his very short interview with James Jebbia from July 2002 back when btinternet.com hosted sites were a thing, and conducted between the own-brand Downlow shoe and the original SB project. Here’s the preserved version of the page. The other links on the page are down, but searchable too — shouts to Simon and his Concept Shop site, with its early history of the Supreme backpack. The article it references is a good one too — talented designer Kevin Lyons’ brief piece on the legalities and morals of borrowing imagery in streetwear, Cease and Desist: Issues of Cultural Reappropriation in Urban Street Design, featuring Russ from SSUR, Joseph from Union, James from Supreme (and Union) and Eric Haze’s in discussion on the topic. Taken from the AIGA Journal of Graphic Design’s January 1996 issue, it’s actually more illuminating than most lengthier examinations of the same subject from recent years. Seeing as Lyons had worked for SSUR on some classic designs for Supreme, he certainly had some insider knowledge. It was reproduced in AIGA‘s now out of print Design Culture compilation from 1997. 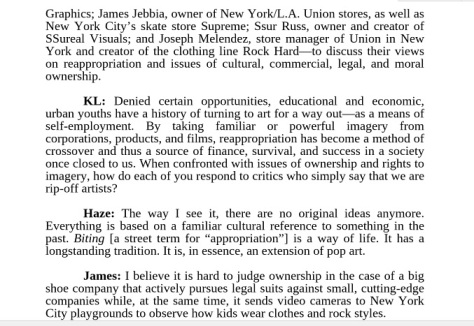 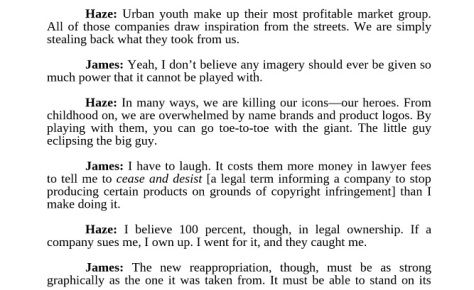 There’s plenty of little moments scattered across publications that altered the course my career would take in one way or another. Back in mid 1998, The Face ran a ‘Fashion Hype’ (and hype would become a word attached to these objects like a particularly excitable Siamese twin in the decade that followed) piece on the newly opened Hit and Run store (which would be renamed The Hideout for presumed legal reasons by 2000). This two page spread was a rundown of things I’d never seen in the UK and sure enough never seen them with a pound price next to them. I immediately rushed out and asked a couple of Nottingham skate stores if they’d be getting any Ape, Supreme, GoodEnough or Let It Ride gear in, only to be met with a blank stare. lesson learnt: Kopelman had the hookups that the other stores didn’t. This Upper James Street spot was selling APC jeans for 48 quid, while Supreme tees were only a fiver less than they are now. The 1998 season when Supreme put out their AJ1, Casio, Champion tee, Goodfellas script design and Patagonia-parody jacket was particularly appealing, and it was showcased here, while SSUR keyrings, BAPE camo luggage and soft furnishings were a hint of things to come. I guarantee that once you made it to the store, a lot of the stuff that you assumed you could grab with ease would be gone — an early life lesson that hype just isn’t fair.

What’s all the fussing and feuding for these days? I’ll never understand the people pretending that they emerged from the womb fully clued up, nodding sagely. Life is about discovery and evolving tastes. Got into something a year ago? Feel free to comment, regardless of what some old misanthrope who hopped on it five years prior tells you. Those who were really there at the start of anything, don’t sit and waste their time typing, blogging and dissecting them, unless they made a bad business decision and ended up on the outside. If something makes a few thousand kids YouTube Ninjaman or New Order, even if it’s just to get bragging rights over their online peers, then it can only be a good thing. then A brand like Supreme might not have been as widely discussed 20 years ago, but it was still fêted enough by the style press to warrant a page in The Face around Christmas 1995 — a magazine that was on the shelf of my local newsagent, with a then-circulation of around 113,000, back when mentioning anything in relation to Stüssy had us interested. Supreme was even on the shelf relatively locally at Dogfish in Cambridge for a bit earlier that year. It wasn’t necessarily a secret society then either — just a good brand, carefully distributed. 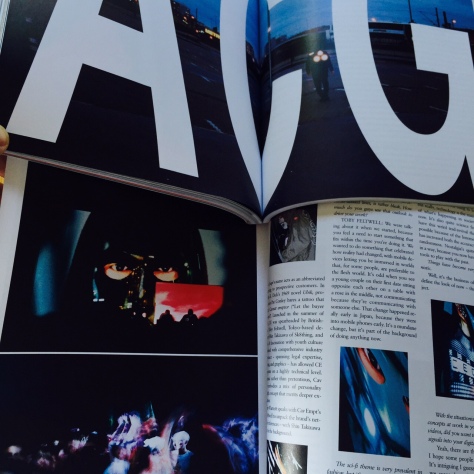 My updates here have been sporadic due to work distractions. For that, I apologise (I actually need to get this basic blog template redesigned at some point soon too). A couple of pieces I wrote are in the new 032c. It’s easy to become jaded in a world where much of what you love has become cyclical cultural mass, but that’s how you become so embittered that you render yourself unemployable. I still manage to get hyped about things like this. As somebody who’s an admirer of ACG, 032c and ACRONYM’s work, I was excited to see the All Conditions Gear article we put together in the new issue, plus an extract from a conversation I had with Toby and Sk8thing from Cav Empt. There are longer versions of the interviews that might find their way online too. Shouts to Joerg for letting me get involved. Go pick up issue #28, because it’s still the best magazine of its kind on the market — the What We Believe piece is bold and brilliant, plus there’s a rare spot of Supreme print advertising in there too. There’s an 032c clothing line coming soon that, going on the strength of some brief IG previews (and knowing that they don’t do anything by half), will be good. 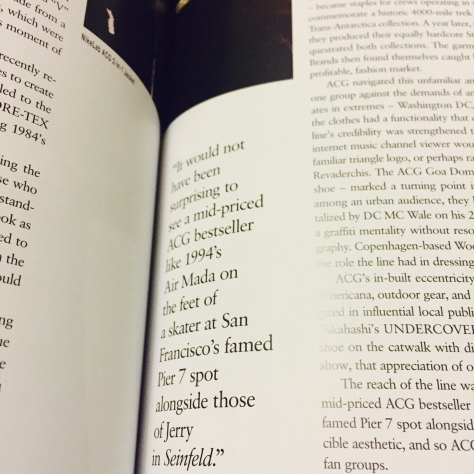 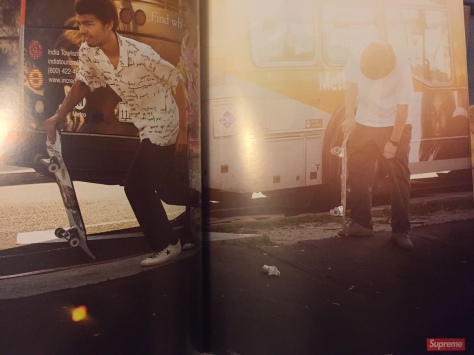 On the magazine front, upping the seminal Ruder than the Rest article from an early 1991 issue of The Face half a decade ago amassed a lot of interest at the time, with this period of real London streetwear barely documented or celebrated. The logical follow-up to it was Norman Watson’s Karl and Derick styled New Skool shoot (mentioned on this blog a couple of times before) from later that year (which includes Mr. Charlie Dark as a young ‘un). That piece united skatewear, streetwear and sportswear perfectly — Nike Air Max and Huaraches worn with Pervert, Poizone, Fresh Jive, Anarchic Adjustment and Insane, plus haircuts by Conrad of Cuts and Rollin’ Stock. It was incredible — the look that dwells in the Basement and gets hectic in Wavey Garms now, but back when it really seemed to take form for a wider audience to watch from far, far away.

6:77FlyCreative have put together an exhibition called Ruffnecks, Rudeboys and Rollups that gathers imagery from this pivotal era of style in the country’s capital, with submissions from the likes of Normski. It runs from a private view on Friday, May 22nd to Sunday, May 24th at 5th Base Gallery at 23 Heneage Street in east London, with some very appropriate sponsorship from Supermalt. I’m looking forward to seeing it, and I hope it’s the start of something even bigger.

Linking every topic above again, something interesting is happening with The Face archives by the looks of things — Maxwell Logan and Nick Logan have started an Instagram account called THE____ARCHIVE that showcases me gems from the magazine’s vaults for its 35th anniversary, like these logo prototypes from Steve Bush. This outlet, plus Paul Gorman’s book, should provide some extra insight beyond the fancy design and memorable features. It’s the 35th anniversary of the very much alive i-D this year too.

I was actually going to up something else here today that I’d written elsewhere, but it probably wouldn’t translate, so I didn’t. That left me with not much to add here that isn’t readily available elsewhere. The last of the holiday block of brie before bedtime had me dreaming about owning this suede jacket from 2000 (fortynos deserves some kind of New Year’s Honours for his services to magazine scanning a few years back) last night. Back then, we were just hunting box logos, hats and sweats and anyway, stuff like this never seemed to make it to the UK anyway — only expensive import copies of Boon and occasionally, Straight No Chaser, ever seemed to let me know these grown-up bits even existed. Now we’re just hypocrites who lambasted a younger generation for doing exactly the same thing. The prospect of NIGO and Tet’s DOUBTFUL AS DOUBLE® line had my ears burning for extra information (I got confused as to whether it was just an exhibition in the Gyre building or a brand, but it’s both) and this Vimeo video is full of Japanese pop-cultural gems from two gents with Kodak memories for moments in magazines when they were on the come-up. This chat with Joe Corre on the subject of menswear from a year ago is good too, despite the terrible sound. Too many great little documents of encounters are hurt by a lack of proper microphone.

We see so many things prior to its release that the sudden appearance of a Mo’Wax Supreme box logo tee at the Saatchi Gallery on Monday night was too fast for blogs to even register. 50 shirts, 38 quid each, all gone. Seeing as Mr. Lavelle was rocking the Supreme shirt on the Champion blank back in the 1990s and he’s tight with employee #1, artist Gio Estevez, whose work is on this shirt, it’s not too unusual that these entities met. A nice throwback to the days when things were gone before you knew that they existed.

Looking at the preview from Warp magazine (shouts to Highsnobiety where I borrowed that image from), there’s a cop-related Supreme collaboration with Raymond Pettibon on the horizon. I always wondered when there would be a Black Flag collection, but after the Jello-free Dead Kennedys and the post 1995 Misfits being terrible, the curse of the ageing punk band seems to be continuing with Mike Vallely joining in with the Black Flag karaoke. Did you see the cover art for What The? The only thing from Black Flag that still maintains its aura is Raymond Pettibon, who wisely distanced himself from his brother’s band many, many years ago. Pettibon’s Twitter is fun (I’d buy a book of his Tweets accompanied by loosely related sketches) and his interviews, with their deliberate lies about raising dogs for fighting and getting a swastika tattooed on his back, don’t disappoint. I almost got the opportunity to interview him five years ago, but it fizzled out — I’m sure it would have been gratifyingly awkward, but if I’d known that he was such a Lil B and Gucci Mane (my role model when it comes to a work ethic, rather than non-work related capers) fan, I would have had a more interesting line of questioning drafted. The conversation above has thoughtful pauses so vast that you can go cook up some instant noodles and make a cheese sandwich before Pettibon makes his point, but, having worked with him before, Jonathan Lethem seems to enjoy the process. I’ve been trying to link the two through other means and there’s a tenuous 3rd Bass connection — Lord Scotch A.K.A. KEO A.K.A. Kid Benetton, Pete Nice’s original partner in rhyme (you can see him spit right here in an excerpt from The Writing on the Wall) is Lethem’s brother and Henry Rollins played Vanilla Ice in the Pop Goes the Weasel video. Despite those rock and punk artworks, Pettibon is pretty fucking hip-hop.