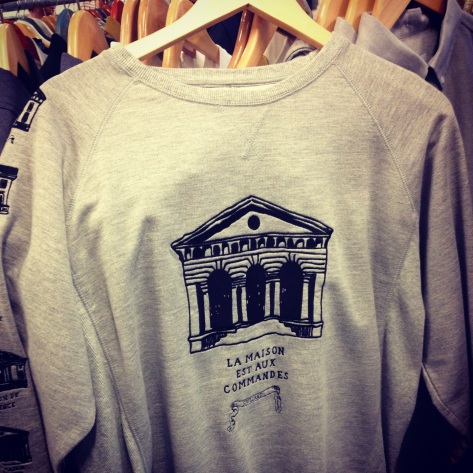 Another MacBook is unleashing the spinning wheel, so I’m using an Acer that doesn’t have PhotoShop and doesn’t seem to want to accept the card from my camera. So you can make do with over stylised, untrustworthy Instagram shots with the filters that make terrible things look acceptable. I’m grateful that as yet, no magic haze has made writing look much better, though we hobbyist copywriters were hit by nobody actually reading anything over two sentences any more and people trying to tell us to write with Google in mind, so I think we’re all equally screwed by social media in 2012. I visited Jacket Required on Friday and got to wander around a tradeshow devoid of men who look like Zucchero and the guy from Nightcrawlers wielding multiple Wrangler and Superdry goodie bags. There were plenty of beige and camo things on display, plus lots of people seemed to be doing animal printed Y’OH-alikes without Kara’s reference points, but highlights came from Wood Wood’s technical-looking, sporty stuff, Our Legacy’s athletic pieces and Soulland’s Versace faux house of Soulland style sweats.

Lots of colour, lots of embroidery and a look of diffusion line that should set of something in the head of multiple generations who grew up desperate to amass labels. Soulland make beautiful, brilliant clothes and Silas Adler just gets it – I would have thought this brand was amazing for collaborating with Jacob Holdt a few years back, but for continually evolving, surely it’s due to blow up imminently? The orange sweat in particular had me bugging out the most. The blogs are about to go wild for technical apparel (which only a handful of factories in the world can execute properly) and food, but these sweats hit the sweet spot between older brother wear nostalgia and simply being bold and brilliant and confident in those tonal embroideries. US men’s magazines are all over Scandinavia at the moment, but they make it sound like little more than blonde women, slicked back hair, beards and rolled up pants, which I suppose it is, but additionally the clothing coming out of there leaves your heritage brand sprawling by evolving into the perfect mix of basics, avant-garde and detail.

What also had me hyped (though it wasn’t necessarily on display) was the UK-made Palace gear. Being a non-skater doofus who still wears the shirts, I was accosted with regards to the source of my Palace shirt during my recent NYC holiday and the brand seems to have gathered hype at an alarming rate. It couldn’t happen to a nicer bunch either. See those eBay prices for the Chanel tribute sweats? The way the Trail Blazers snapback is everywhere and how the afterthought New York Giants tee became a bestseller? Crazy. Now the brand has been bootlegged multiple times, people seem to think the comedy surf line is a fake too, but they’re mistaken. British made shirts (are we allowed to use that term “cut and sew” with its visions of gun print tee brands switching to preppy chambrays and chinos really badly?), jackets, plus trousers and other stuff is a nice expansion of the Palace brand and a nice Tango slap to anyone who thought it was just about bolshy screenprints. That’s’s something to look forward to over the next month.

If you know central London, you know that Camissa & Son does the best sandwich in the area at a good price. My friends at Slam City know that and they’ve contributed that recommendation to Vans’ Syndicate newspaper, ‘These Days’. I’m on Syndicate’s dick because it always gets things right. That LXVI stuff? I’m not convinced yet, but Syndicate’s packaging, risky choice of collaborators and hard-core approach to distribution is always appreciated. Their paper (supplied to me by Mr Charles Morgan) reminds me of Berlin’s fine ‘Aspekt Ratio’ in its broadsheet execution, but the lengthy Jason Dill and Anthony Van Engelen interview, guide to making your own tattoo machine, W(Taps’ TET on his first Vans (a pair of Sk8 His), an Ice-T interview (bringing the whole $YNDICATE thing full circle), chat with skate ‘zine legend Gary Scott Davis and a Mike Hill Alien Workshop design retrospective are all tremendous. I know creating a tangible piece of print media is this year’s equivalent of the dull video lookbook and teaser, but this is absorbing, passionate content that should resonate with multiple generations.

Lots of people hate Byron Crawford, but you can’t deny that his musings are the perfect antidote to a world where everybody’s toadying with hip-hop so they don’t get locked out the listening party. He’s just put out a Kindle book, ‘Mindset of a Champion: Your Favorite Rapper’s Least Favorite Book’ charting his rise from proto-blogger to-day jobber and internet, sorry, internets, star. It reads like one vast, sprawling, semi-proofed blog entry, but it’s a fun read. Crawford has a knack for capturing mundanity that matches his appetite for controversy (“KRS-One himself has never been on crack, as far as I know. he’s just crack-ish. he used to be homeless. He’s know for making off the wall statements.”) and there’s tales of rap board wars, talkbacks and hip-hop journalism that justify the £2 outlay within just a couple of chapters.

This interview with Brent Rollins is excellent. Like me, he wishes he came up with the UNDFTD logo, but unlike me, he’s a design genius and it’s revealed that he’s the Jordan IV and orange sock dude on the ‘Do the Right Thing’ poster. On a Complex-related note, this rant from the perspective of some chisel toe shoes is also worth your time.

The Kate Uptons of this world will come and go, but people will still get excited about Kate Moss. Yayo footage couldn’t stop her and neither can any number of sket upstarts. There’s a whole book about her called ‘Kate: the Kate Moss Book’ dropping in November via Rizzoli delivering a full retrospective of her career thus far. Jefferson Hack and Jess Hallett editing, plus an $85 pricetag and 368 pages indicates that it might be pretttttttty good.