Despite lasting for over 104 episodes before it was canned, The Word was treated like televisual Super Noodles by critics and establishment figures alike for half a decade. We, the target audience, appreciated it though, and 19 years after its final episode screened in March 1995 (watching Strike’s performance of You Sure Do from that broadcast this evening had me emotional), there seems to be a worthy amount of nostalgia for those 808 State soundtracked opening credits and the lawlessness that followed. As those reviews preempted online coverage, their toxicity has deteriorated, so we’ve forgotten the disorganised outside broadcasts and hopefuls munching on plates of dead skin, emptied colostomy bags and filtered the best bits into those memory banks. What was good was great — like live performances by artists who, in a concerted bid to show no respect to the live format, made classic TV, or George, Zippy and Shaun Ryder getting acquainted — but there was a lot of rubbish in the mix. It was sometimes like the contents of an issue of The Face being bellowed from the stage during a nightclub PA, but that was part of its appeal — sincerity shuffled self-consciously alongside humiliation and irony. We watched that thing religiously as its excesses elbowed it from a tea time slot to the post-pub position. It was there that a generation planning to go harder the following night would exit the pubs, get home, skin up with terrible hash, crack open more beers and watch it alone or in a heavily populated front room. The Word was great group TV every Friday around 11pm.

The two segments that stayed with me weren’t the usual suspects either. One was a late 1993 segment where Mark Lamarr investigated Desert Eagles and chatted to the Franklin Avenue Posse and Steele from Smif-n-Wessun about it, before a return to the studio where Terry quizzed forgotten rapper K7 (of Come Baby Come fame) on the subject of firearms. The second was a February 1994 piece from the same episode where Rod Hull attacked Snoop Dogg (mentioned here a few years back) on Nike founder and chairman Phil Knight’s son Travis back when he rapped as Chilly Tee (he now heads up LAIKA). Where else were you going to see stuff like this? Beyond these clips, it’s worth noting that The Word Appreciation account on Dailymotion has at least 17 full episodes uploaded — there’s all kinds of misses in there, but the gems remain and it’s best streamed late in the day and under the influence. Just like it always was.

I don’t want to hate things – it’s just in my DNA. I’m British. If it’s successful and we’re not getting a piece of the pie — or if it’s different — that’s grounds for hatred. Hate’s such a strong term too, thrown about by the kind of people who would shake the object of their hatred’s hand face-to-face, but call them a prick behind their back. Most of the time, I don’t actually hate something — I’m usually responding to middling things that I’m ambivalent about with a half-hearted negativity that’s not nearly as potent as hatred should be.

Mods, Skins, Teds and Punks were frequent foes despite the stylistic crossovers and behavioural similarities and it’s good to see Andrew Bunney and Daryl Saunders’s BRITISH REMAINS line pay tribute to the joys of sloganeering, a post-war history of working class style and inter-gang attitude. For the record, I feel greater animosity towards the typified contemporary incarnation of the mod more than the other three — skins seemed to merge some mod and ted swagger and in its picture postcard form, punk feels like the bastard son of all three previous looks. Why would a mod be wearing the ‘60s uniform if they were authentically mod in spirit?

The Camden mohawkers with the Exploited-style do’s have become the nonconformists again through their unwillingness to change from the early ‘80s fad and skins have had such bad press through supposed racist associations that to dress in the skin style could bring them trouble and there’s a joy in seeing the fifty and sixty-something teds who saw no point in any other way of dressing. But mods? I suppose the real mods are the ones that you wouldn’t even recognise as a mod now, bar the attention to the details that are strictly for those in the know. The Weller-ites with their target logos were presumably never cool in the first place.

It’s always fun to write stuff for BRITISH REMAINS because I can enjoy those flashbacks to A-level Sociology and Dick Hebdige’s work. Plus seeing my babbling words typed is a more exciting experience than the usual flat fonts, SEO friendly structures or compromises to copy-paste.

On the font subject, I finally got my hands on a copy of the last Rig Out magazine last week, where Glenn and the team printed my Polo article on four pages that, combined, are the size of a small apartment. Andy Bird’s design is amazing.

Team Proper’s new issue is top too. The writing and content in the new issue is impeccable. The ’20 Albums You Don’t Own But Should,’ Private White V.C.’ competition, Our Legacy interview (the Ethnic Arrow shirt is great) and the Robert Wade-Smith interview is worth your time, taken from that ‘Northern Monkeys’ book that seems to have been in development forever. I love Proper Magazine.

After publishing deals fell through, friend of Proper, Mr. James Brown (via his Sabotage Times site) and adidas Originals have allied to put out the compilation of fabled fanzine ‘The End’ just as DjHistory put out the ‘Boy’s Own’ book a short while ago. The book’s available to order now and looks like it’s a Sabotage-only purchase. There’s no substitute for accounts at the time rather than the retrospective tint when it comes to casual culture. While it was a far glossier an accessible proposition, I’d like to see a good compendium of ‘The Face’s greatest sub-culture articles too.

‘The Face’ prompts memories of religiously consuming ‘Sky,’ iD’ from WH Smiths and ‘The Word’ and ‘Passengers’ on Channel 4. I once wrote about the Chilly Tee/Nike segment on here, but the video was pulled down, but The Word Obsessed has upped plenty of golden yoof’ TV moments. Maligned at the time, I maintain that it was a necessary lifeline for us provincial types. This clip from early 1994 is a great TV moment. Could Terry Christian’s voiceover be any snider?

And here’s John Lydon showing off his Jordan Vs with a Bart Simpson hanging off them in 1991.

Some kind soul also upped ‘Subway Cops and the Mole Kings’ from 1996, which I caught in an impaired state as a youngster on Channel 4 and assumed was lost forever.

Banks Violette channels the doomier side of youth culture nicely with his pop-art-takes-a-death-dive aesthetic. The immersive nature and emphasis on thrashy, sludgy sonic assistance, plus the sheer scale of his works is always worth the detour. NOWNESS — a site that has the rare ability to grab my fractured attention span with an uncluttered sense of focus — just upped a video interview with him. 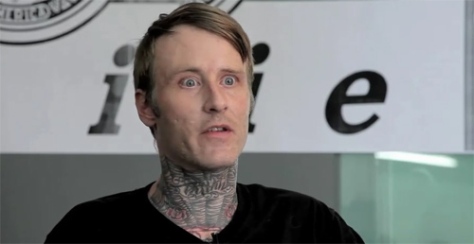 What’s happening with Meatwagon (contrarians can keep on jocking brioche buns, bone marrow and an abundance of foliage elsewhere, but it’s still the best burger in the UK) after it leaves the Peckham Rye in a week’s time? The www.meatliquor.com site with a mysterious 111111 doesn’t give too much away, but there’s a central London Meatwagon-spinoff opening soon that’s currently recruiting. Central seems to be getting exciting again. 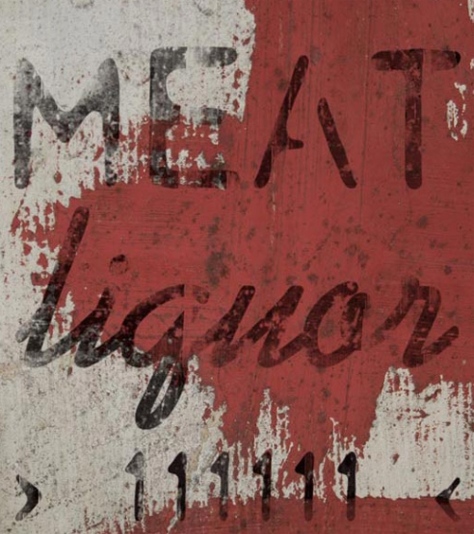 I’m surprised that people still try to shill CDs on street corners internationally in the MP3 era, but what’s the alternative? USBs in novelty crack vials? Waka Flocka Flame’s new mixtape however, warrants a physical purchase just to gawp at the insane cover art. I spend an inordinate amount of time on www.mixtapewall.com looking at artwork, but www.f16artsworldwide.com and their work for Lebron Flocka James is crazy. They seem to be tight with Trap-a-holics and are also the facilitators of Juicy J and Lex Luger’s bar-geeked vision. In a world where cover art is no longer a main feature, I salute the minds still throwing the kitchen sink onto a 12cm by 12cm surface and these guys seem to capture the gunshots, wild boasts and relentless drops of the most prolific mixtape practitioners with ease. Just when you thought Pen & Pixel’s spirit or Phunky Phat Graph-X (RIP Tracy Underwood)’s excesses couldn’t be topped, someone is trippy enough to put their whole crew in a cup of purple drank. That right there is why I still love hip-hop. 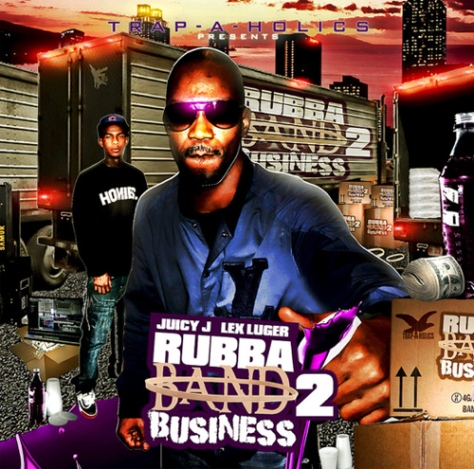 This blog post from April 2009, originally had a link to footage of Chilly Tee’s legendary ‘The Word’ segment from ’93. Curiously, after I put it up, the link went dead.

Anyone in the UK of a certain age recognises that ‘The Word’ was a watershed TV moment. Broadcast between 1990 and 1995, it gradually amassed an unjust amount of hatred a couple of generations above the show’s target age. Granted it was a little slapdash, and the presentation was a little wonky, but if you wanted to see Onyx doing a reverse radio edit for a rendition of ‘Throw Ya Gunz’ that rejected the notion of incinerating a choir in favour of going, “…live like a wire, I’ll set ya fucking mother on fire…” or the Pharcyde live alongside a segment on Desert Eagle handguns (most boys going back to school on Monday morning giddy on the notion of shooting your enemy in the head through a car), this was the spot.