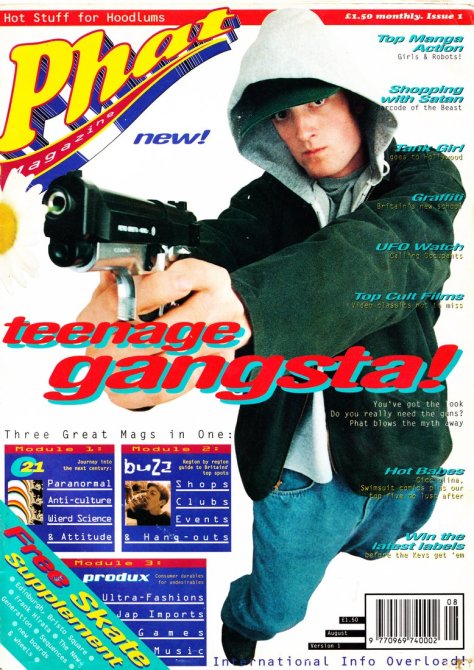 I’ve covered Phat magazine on this blog before (though, by using Imageshack back then, all of the imagery has since vanished — something I’ll rectify.) This was actually written for Ala Champ Magazine, but a format issue rendered it vaguely Burroughsian with a cut and paste approach to narrative. You should still buy issue eight of that publication though because it’s excellent. Here’s the article in its full form.

“There are those who are not happy about handing over our beautiful country to these ignorant hoodlums.“
(Auberon Waugh from The Daily Telegraph in a discussion about Phat magazine, 1993)

Nothing screams a certain early 1990s naivety like phat. Phat beats. Phat denim. It was still a mainstay of po-faced anti RnB rap-night flyers until the end of that decade. Then somebody decided that the extra letter was a waste of consonants and spelt it correctly again, but some phats are harder to shift than others.

I was witness to a failed coup on paper as a bored teenager on a trip to Devon in summer 1993. As a magazine obsessive from an early age and far from privy to any industry politics, I was perplexed as to why R.a.D magazine — a seminal British skate publication — had become little more than a pamphlet, but the appearance of a R.a.D-like UK-based title called Phat on a village newsagent shelf had me intrigued. Those glossy, easily damaged pages hurled multiple topics together — movies, girls, video games, music, skate and BMX — during the boom time for Pete Rock productions, In Utero, big clothes and World Industries that still causes misty-eyes in thirty and forty somethings, plus legions of premature nostalgics wishing their twenties away.

Phat spoke to me. Loaded wouldn’t set the lad-mag movement off until Easter the following year, though Phat had the spirit of that magazine’s more literate early intentions with Gavin Hills — who wrote for both R.a.D and The Face before his tragically early death in 1997 — as editor. Whereas the male-orientated successes following in Phat‘s wake would celebrate the lad mentality, Hills’ editorial would sneer at the “Kev” everyman characters whose attitude was at odds with its target readership — an in-the-know 13-16 year old male audience.

Speaking for the newly formed C12 Publishing, ad-manager Laurence Stubbs told the press that this was a project, “…aimed at the pre-Face and Arena reader.”

America had the fabled Big Brother magazine (which had caused its own outcry for a suicide article in 1992) that no store in my hometown stocked and around the same time I discovered Phat, Sassy‘s little brother, the BMX-centric Dirt (helmed by Spike Jonze and Andy Jenkins) would crop up in a comic shop packaged with a copy of Silver Surfer. All three shared the same attitude and, like Phat, Dirt would be short-lived too.

Operating as multiple fanzines in one, Phat‘s modular approach to editorial, irreverence, information overload, celebration of consumerism connected with every subculture I’d ever fixated on. Riffing on R.a.D‘s early life as Skate Action — a BMX Action Bike magazine insert in the late 1980s — this was that approach amplified.

Much of Phat‘s staff were former R.a.D crew members, down to the stewardship of UK skate ambassador Tim Leighton-Boyce. A last-minute buyout of R.a.D — which had been subject to a number of ownership changes in its lifetime — by a publisher known more for windsurfing magazines after Robert Maxwell’s death at sea left the magazine a slim shadow of its former self, with Phat reading more like a reboot of what its predecessor could have been.

According to Leighton-Boyce, the purpose was simple, “Phat’s original intent was to do whatever we needed to do to keep a decent skate magazine on the streets of Britain.”

The genesis of the magazine was fast, “Phat came into existence in a great hurry. We rushed around, raised some money and got organised to take over [R.a.D]. But someone else was also interested and they presumably offered to pay more. So, suddenly we found ourselves with everything in place to carry on with the magazine, but no magazine to carry on with.”

It’s curious then, that issue one (preempted by C21’s giveaway PSP Phree Skate Press newsletter to preview the project and explain the situation) relegates the skate content to free supplement status once again, but Phat’s breadth of content was a strategy to get it on shelves, “The potential distributors, rightly, suspected that what we wanted to do was launch a skateboard magazine, for which there was almost no market in those days. ‘This isn’t a skateboard magazine, is it?’ was their big question.”

With its “Hot Stuff for Hoodlums” tagline, Phat‘s chapters included C21, a screen grab laden section documenting cult films, graffiti, the paranormal and even including some business advice from a young James Lavelle, Buzz, with its shops, clubs and classifieds, plus Produx, with its onslaught of street and skate wear from the likes of Droors, Pervert and Fuct, shoes, record reviews and loosely related gadgets and toys.

Chris Aylen, who contributed to R.a.D and Phat, taking that spirit to the launch of influential website, Spine Magazine (as well as giving me my break) sees that launch time as a pivotal one, “At the time Phat was launched it was clear that the boundaries between skateboarding, hip-hop, graffiti and street fashion were blurring. Skating in old-school trainers — primarily because they were cheap, not necessarily because they were ‘cool’ — was more in line with hip-hop than skate rock, and we started hearing rap and more funk-based soundtracks in skate videos, which led to an interest in associated activities such as graffiti and buying records.”

Leighton-Boyce recalls it being passion project, “I don’t think we ever included anything that someone in the group wasn’t really into. I think that shows in the quality and density of the content. Although there was no master plan, what circumstances led us to do was to fill up a magazine with loads of stuff which we thought was interesting or exciting, or funny. That’s not something you can easily fake as part of a marketing strategy.”

And what about that strange-sounding digital stuff? Phat’s editor was quite the early adopter, “We [Phat] did try to lead readers towards the skate world online, but we were too far-stretched to do anything more than that at first.”

Phat ran pieces on newsgroups and treated email as a viable mode of communication when we were still assuming it was a gimmick. In fact, BMX Action Bike had a preposterously long Telecom Gold email address in the magazine as early as 1985. In 1994, State51 was launched as an early agency of sorts for clients like Virgin Records to dip their toes in the nascent world of the internet.

R.a.D‘s The Wall was a section dedicated to recommendations of small-town hookup spots for skating and socialising like some proto-forum, which would eventually become the early crowdsource project, knowhere.co.uk. Leighton-Boyce already knew how to engage with low attention spans, “If Phat had survived it would have blossomed online immediately. We were always passionate about making the magazine as interactive as possible — the aim of The Wall was to make it easy for readers to get material into the magazine without having to do something formal like write a letter, let alone an article.”

Sadly, the magazine’s fate was sealed from the very beginning, a victim of its own appetite for controversy and the dangerous assumption that reactionists would take the time out to read the content before forming an opinion. A gun on the cover of August 1993’s inaugural issue, previewing a provocatively written anti-firearm article, would lead to newspaper columns, radio show phone-ins and Parliamentary debates on corruption of young minds and gang culture’s supposed rise — a precursor to the nation’s alarmist attitude toward any youth in a hoody a decade later.

All publicity might be good publicity, but when it causes nationwide retailers to boycott it and for big-name advertisers to back off, that’s a significant problem. Two more editions would follow in September and October and then, nothing. A few write-ups hinted at a resurrection while the team — now, without a designer — tried to find a lifeline, albeit in vain.

In a parallel universe without firearm controversy, could Phat have sustained? Aylen felt that the editorial approach was almost limitless, “I think that Tim, Vernon Adams, Gavin Hills, Ray Calthorpe, Simon Evans, Steve Hicks and the rest of the editorial team kept the theme of the magazine loose on purpose, which led to a number of really interesting articles.”

For Leighton-Boyce, there were early signs of trouble in that the sales weren’t high pre-controversy, “It may have been ahead of its time in that people did not buy it in sufficient numbers even before it started to be pulled off shelves.”

He also faced some questions regarding the sheer amount of topics each issue covered, “I recall that when we were trying to keep Phat going by trying to sell it to other sympathetic publisher, the publishers of Viz questioned whether we would ever be able to carry on generating such an amount of good content each month.”

Flicking through Phat‘s pages, the layout is very much of its time and not every piece of writing has held up particularly well, but that’s beside the point — it reads like the predecessor of the lifestyle blog, with its escalating clusterfuck of cultures and disciplines in one place, existing in a realm where every WordPress is deemed a lifestyle magazine. Phat was an experiment — to some it was just another dud launch, but for many who did pick it up, the impact was immeasurable.

Nowadays, corporations want to claim their own terrain in the skate world by any means necessary to win the hearts and minds of the same teen audience that trio of magazines was looking to engage with. Leighton-Boyce and team Phat’s smartly-executed subterfuge of their actual intentions reiterates just how much has changed in 21 years, “The impression I get now is that all manner of things try to attach some kind of ‘skate’ label to themselves and to mix in some skate content as a sales point. We had to deny that we were a skate magazine.”

(Thanks to Tim and Chris for taking the time out to answer questions on things they worked on 21 years ago).

The covers here are borrowed from the excellent Vintage Skateboard Magazines site that should make my fellow victims of motherly magazine culls get a little weepy.

The year’s 1993 – hip-hop is horn-led, R&B choruses are frowned-upon, shorts are big, athletic footwear is rugged, with outdoor courts in mind, and if they’re too much for you, the boom in plain retrospective suede models is in full swing. In the following year, the resurrection of the earlier Jordan models will slowly but surely infect sneaker releases, arguably to the industry’s detriment. But that’s enough of the scene-setting (and bitter digressions) – if you didn’t get into the big smoke much in the early ’90s, a magazine like ‘Phat’ was a glossy-papered oasis of subcultural information and a break from then-waning publications like ‘i-D’ and ‘The Face’ who were too busy covering Courtney Love and ‘The Crying Game’ to focus too much on street fashion, giving us our very own British take on the then-great ‘Big Brother’. ‘Sassy’ spinoff (via Andy Jenkins, Mark Lewman and Spike Jonze) ‘Dirt’ also achieved cultdom Stateside, with a similar gung-ho, irreverent spirit before cancellation, but over here, and available in your local WH Smiths? We had a lot less to go on. ‘Phat’ was a mine of information.