Do you know what’s hypocritical? Berating rap nostalgia and then losing my mind over a box set of a well documented hip-hop release from 1994. But considering I change my mind on most subjects at least thrice daily, consider whatever’s on here a screengrab of my psyche at that moment in time rather than any opinion with longevity. CNN just got excited about Nasir Jones’ output, I personally haven’t fucked with much of his work post-‘Illmatic’, bar guest spots, a couple of songs per album (‘You’re Da Man’ on ‘Stillmatic’ samples ‘Sugar Man’ by Rodriguez — the subject of the excellent ‘Searching for Sugar Man’ documentary), ‘The Lost Tapes’, that Mike Tyson bio track, and the newest LP. I attribute my own reverence to the running time — ‘Illmatic’ isn’t long enough to let my frayed attention span wane and that I purchased it alongside that bland Fugees tape when it first dropped, meaning it shone even brighter by comparison.

Get On Down‘s Akinyele set might have been canned (sample clearance hell), but their work on the classics amplifies the joy of gawping at sleevenotes in a digital era. The wooden case, audiophile CD, repressed and remastered double vinyl, hardback book, replica press release, poster and press shots, plus the reproduction of the earlier Nas logo sticker are all geek manna, but they’re as far removed from that launch priced Sony cassette with the distorted bass as it gets. There’s a handful of hip-hop albums that deserve the Springsteen-esque bombast, but when I can psychologically separate myself from the kind of rap fan-damentalists who leave “cool story bro” baiting essays beneath blog entries, this album remains largely (‘One Time 4 Your Mind’ still sounds inessential) unfuckwithable. Thank you Get On Down and Mr. Frank the Butcher for the hookup on this.

I’m hearing good things about the ‘Maniac’ remake and despite my love of Jay Chattaway’s score for the original, the mysterious Rob’s soundtrack for the redux is pretty effective. Before that film’s sweaty sadism wrecks your day, how about ruining your Sunday by watching the legendary Austrian serial killer flick, ‘Angst’ from 1983, with the innovative camera work (mentioned here before) that influenced Gasper Noé in a major way. Somebody’s kindly upped Gerald Kargl’s hard-to-find masterpiece onto YouTube. If you can tolerate things like this, you’ll love it and if it upsets you, it’s fucking meant to — it’s a kinetic but hyper real exploration of a serial killer’s antics in bleak surroundings. It kind of goes with the territory.

It’s tradeshow season and I’m anticipating a mass of prints on racks. Previews of Engineered Garments spring/summer offerings hinted at them executing that aesthetic better than most and the Nepenthes Osaka’s site’s images of the Anchor Baker Jacket, Paisley Ghurka Shorts and that insane oversized blow up of the more restrained floral print on another Lafayette Shirt from this season are all way more interesting than much of what I’ve seen elsewhere. These and the Hawaiian Print Microfiber Ground Jacket are all fun Ridicule is nothing to be scared of, but I bet I get too shook to get properly floral. Those that can will make that giant pattern look incredible while the rest of us resort to our drab wardrobe staples. More Engineered eccentricity. Just think of paisley as a form of camo — albeit, late 1980 indie club camo. 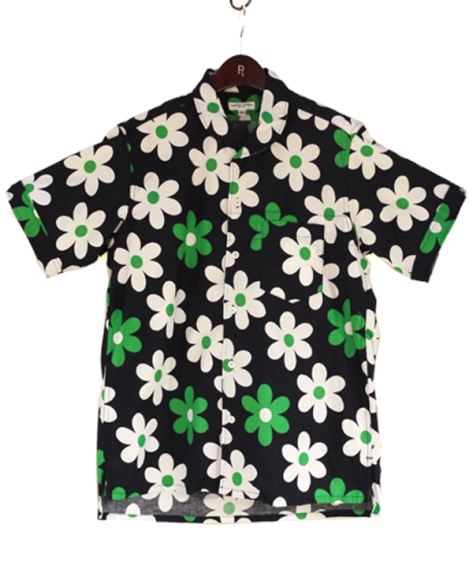 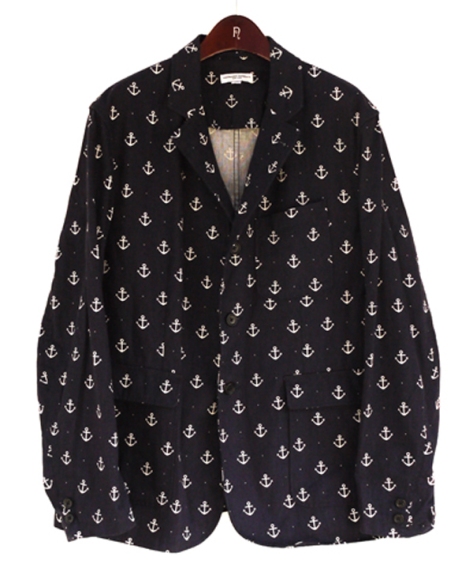 What happened to the ‘Blue Gold’ denim documentary that did the blog rounds back in 2009? While we wait, ‘Warp and Weft: a Snapshot of Raw Denim in the United States’ is finished and out there with a Kickstarter cash boost (thank you Selectism for the heads-up). 70 minutes of denim fanatics talking proved pretty absorbing — Superfuture culture is prominent throughout, and the appearance by their denim Jedi, RingRing, with his face blurred, the interviews at Selfedge, the DIY jean making footage (via Roy Slaper) and the visit to the Levi’s archive (I once worked on a LVC project and had to get in touch with the archive who didn’t think some late 1980s Levi’s selvedge designs existed) are all highlights. The infamous Levi’s legal blitz of 2007 which changed the repro market is mentioned, as is the occasionally overlooked but pioneering Warehouse brand. The RED camerawork’s nice, but the sound doesn’t match that clarity, but it’s a minor gripe. If you missed the launch, you can still support it over here. This is the subject’s surface scratched — a sequel set in Japan is needed. A UK edition with footage of Robert Elms’ near lynching for goading Northerners over jeans after the December 1984 end of Levi’s selvedge production as the opener would be amazing.

I would love to thank the person who sent me this scan of a page from what I believe was a 1986 issue of ‘Runner’s World’ with the entire Steve Cram Nike collection (including the legendary Destiny — for kids who were too cool and monied to fuck with the Bongo), but I lost the original email to email or comment and I’ll amend this. This collection flopped at the time, but the uncommercial colours of the time look great in 2013. Bourne Sports in Stoke-On-Trent didn’t need a website — they just slashed prices and an order form. I wish I could use some kind of time traveling Diners or Access card and buy the lot. The Cram Range is very, very underrated. I know we’ve discussed it here before, but this is a clearer look at the scale of the line. 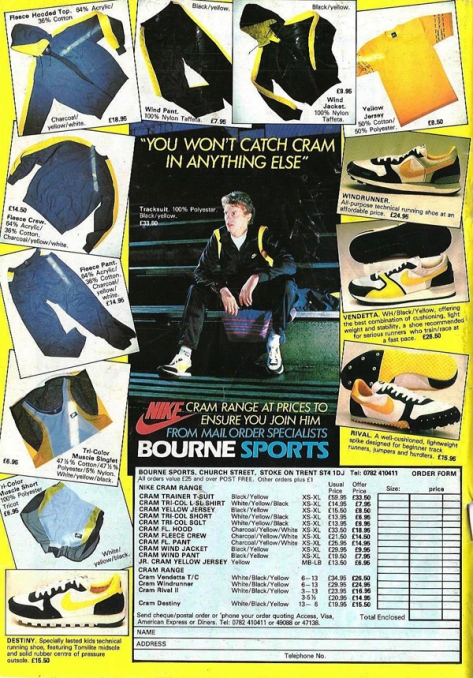