My refusal to use an RSS feed has dropkicked me out the loop. I miss out on everything. It took FACT to tell me about the first of 18 Rinse YouTube interviews to celebrate their 18th birthday, Oneupmanship Journal to tell me that Four Pins had upped a piece about the resurrection of Padmore & Barnes (I believe that the new production will be in Portugal rather than Ireland) and Mr Sofarok to tell me about the relaunched LTD’s two-part PNB Nation retrospective, complete with interviews with all the brand’s founder members. I don’t think PNB Nation gets its dues (in fact, there’s a number of “urban” brands that deserve a retrospective — I know a number of significant figures passed through Phat Farm) and solid information is thin on the ground. Knowing that the PNB crew ended up in significant industry roles, both founding brands and guiding existing entities, I got the feeling that there was no time for retrospect, because the wheels were still in motion for their careers. The contemporary PNB Nation with the Nick Cannon affiliations was an abomination compared to a pioneering east coast entity that linked skating, hip-hop and graffiti before Supreme got there (though James Jebbia and Union played a significant role in PNB’s elevation). Now emails and @ Tweets about t-shirt brands are the new please-listen-to-my-demo as the cotton ceasefire that had us in plain white and grey seems to be over, young ‘uns need to learn about the selling-from-a-carrier-bag approach of years gone by before they starting visualising dollar and pound signs. West works for Supreme, handling special projects (the special ops of skatewear) and I damn near Stanned out on speaking to him recently because of the PNB legacy. I still don’t know what happened with the Perry Ellis deal between 1998 and 2000, but PNB stays important. For those who’ve seen this blog before and remember me thinking Ed Lover was wearing a Supreme sweatshirt on the final ‘Yo! MTV Raps’ in 1995, former PNB man Sung corrected me on Instagram — it was PNB. Fuck punctuation and paragraphs. Go and read the feature here. Salutes to Hawaii Mike for putting it together. 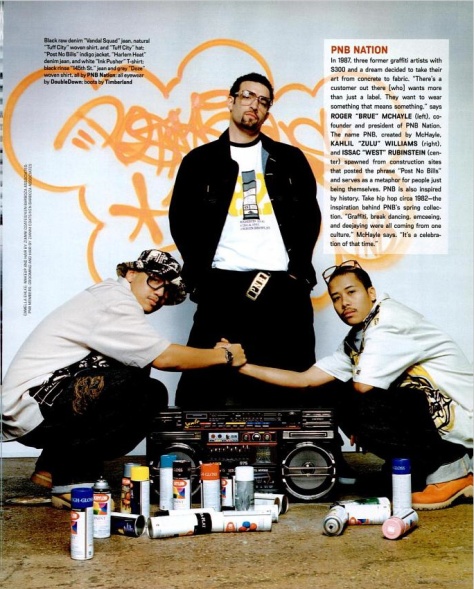